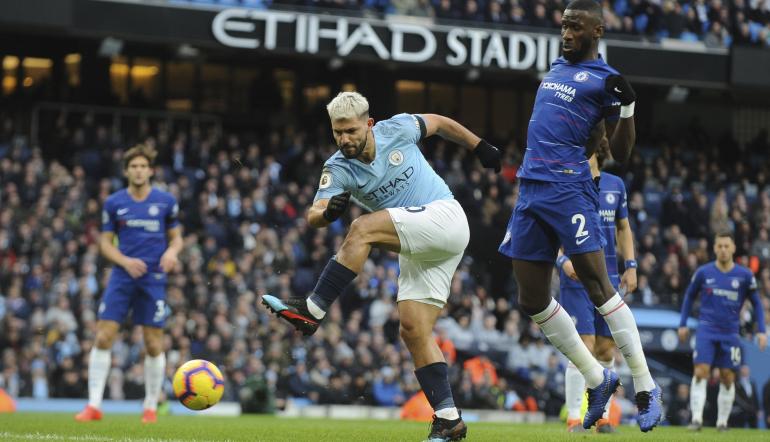 Fourth plays third at the Etihad Stadium on Saturday evening as Manchester City take on Chelsea. Pep Guardiola’s side have had some time to regroup and focus after that damaging 3-1 defeat to Liverpool and we could see City get back to winning ways here.

The defending Premier League champions now find themselves nine points adrift of Jurgen Klopp’s side but City can’t afford to get too caught up on that just yet. It may prove prudent for the hosts to take things one game at a time for now...

Aymeric Laporte’s injury has crippled City’s title hopes – the hosts have struggled to inspire confidence in his absence. With the Frenchman expected to return in January, City will be hoping to close the gap at the top of the Premier League table.

However, you won’t find too many punters backing City’s defence to keep a clean sheet on current form and Chelsea will fancy their chances of an upset this weekend. If they can get to half-time on level terms, Lampard’s side could deliver the decisive blow late on.

After a slow start to the campaign, Chelsea have found their feet in recent weeks – winning their last six league games. The Blues were full of confidence prior to the international break and fans will be hoping that they can pick up from where they left off.

6/1 for an away win could turn out to be a huge price come Saturday night. Chelsea’s record at the Etihad Stadium isn’t great but this Blues side is heading in the right direction and we could see Lampard’s side take full advantage of City’s woes at the back.

Raheem Sterling has been in sensational form for club and country this season and he could be the thorn in Chelsea’s side once again. Sterling is now arguably the best player in English football and 11/10 for the City winger to score should be snapped up.

Lampard insists on an attacking approach and it wouldn’t be a huge surprise to see Chelsea go at City early on. Sitting back and settling for damage limitation is not the way to go in a clash of this magnitude – that tactic has stung Chelsea in the past.

The 21/20 for over 1.5 first half goals is very tempting indeed. An early goal for either side will set the tone for the rest of the contest and this has the potential to explode into a goal fest. Neutrals certainly won’t want to miss this one…

With Liverpool playing against Crystal Palace on Saturday afternoon, City could be 12 points behind their title rivals come kick-off. Guardiola has insisted that the title race isn’t over yet but Liverpool have been relentless and the Reds are showing no signs of letting up.

The international break came at a good time for Man City – Guardiola has had a couple of weeks to reflect. Chelsea may find themselves on the end of a City backlash if they’re not careful and punters may be tempted by the 6/5 for three or more home goals.

Lampard has got Chelsea purring but this is as difficult as it gets. We will learn more about Chelsea’s credentials on Saturday evening than in previous weeks and winning at the Etihad may be beyond their capabilities at this moment in time.

Defensively, City can be got at though and the 6/4 for a home win with both teams scoring is the way to go. Guardiola’s men should prove too strong for a spirited Chelsea in the end but Lampard’s men can take a moral victory by keeping the scoreline respectable.

If you fancy a punt at slightly longer odds, Sterling to score first in a Man City win is another way to go. The 5/1 available offers incredible Premier League betting value ahead of what should be a massive clash between two heavyweights of English football.

LONGSHOT: Raheem Sterling to score first and Man City to win (5/1 with 888sport)