Rugby Referee Salary – How Much Do Rugby Officials Make?

From referee match fees to Rugby World Cup ref salary, the topic of rugby referee earnings is red hot amongst fans. How much do the best rugby refs make? 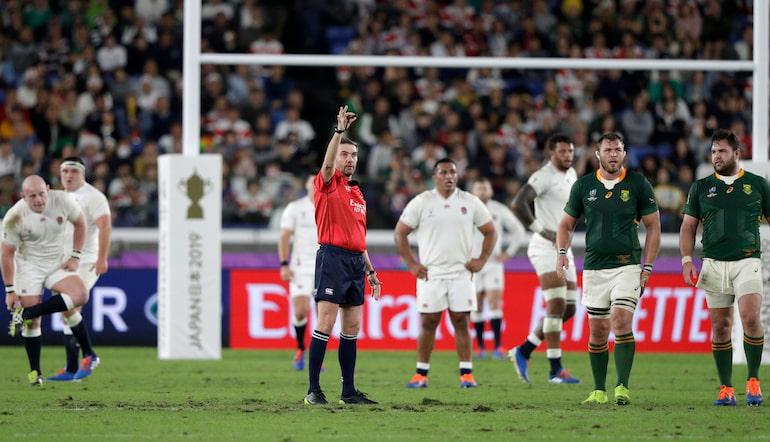 The role of a rugby referee is tricky in some ways but simple in others. Ultimately, the main job for an official is to keep control of a game – discipline, particularly in rugby, is key.

We hear the likes of Wayne Barnes, Nigel Owens and Jerome Garces week in, week out but how much do rugby referees make in a year? That is a question rugby fans want to know.

While a referee decision can impact rugby league betting and the outcome of games, this is a high pressure role and respect for the official in both codes of rugby is essential.

Here, we are going to focus specifically on rugby union rather than rugby league. This is for several reasons, but mainly as the finances in union are huge in comparison.

The rugby union vs rugby league debate is for another day. Instead, let’s tackle the question on how much rugby referees make – whether that’s per year, match fee or per tournament.

How Much Do Rugby Referees Get Paid?

The amount of money earned by rugby union referees varies depending on experience, level of competition and the governing body itself.

There is an elite group of referees when it comes to international rugby union and they are among the highest earning officials in the sport, with the likes of Wayne Barnes and Nigel Owens coming out on top.

However, Premiership Rugby referee salaries and Pro14 referee earnings are unable to rival the figures awarded at international level.
In New Zealand, governing body Sanzaar treats referees in a similar manner to players – and many of the top referees live comfortably.

Reports claim that Super Rugby referees can earn six-figure salaries and are allocated a car for business purposes. Add Test match payments into the mix and you’re talking a rugby ref salary of over £100,000.

For what it’s worth, Super Rugby referees were paid a fixed match fee of £51 when the league went professional in 1996.

Finding clear, trusted sources for rugby referee salary information is difficult but we get a general idea for the average earnings an official can make per year.

Whether you’re into rugby online betting or not, the financial side of the game is enough to attract interest from the wider sports community – especially when it comes to referees.

How Much Do Rugby Refs Earn Compared To Football Referees?

The difference in the amount of money in rugby union compared to football is staggering. If this was an in play betting race, football would be winning by a country mile.

While rugby is an elite sport, football is on another scale altogether – clubs are often more profitable than major businesses.

According to a French report on finances in rugby, Pro14 referees earn around £3,500 per month for officiating in the competition.

Meanwhile, Premier League referee salary figures are much higher, with some officials topping the £200,000 mark per year.

Ultimately, the money in rugby cannot compete with the money in football. But even as a percentage, it looks like rugby referees are being short-changed.

The referees selected to officiate at the 2018 FIFA World Cup in Russia were paid a fixed salary of £48,500 plus an additional £2,000 for each match refereed.

Comparatively, the estimated match fee for a rugby union referee at the 2019 World Cup in Japan was £1,500 per game. The fixed salary for attending the tournament is unknown.

Most rugby union referees have another form of employment – whether that is related to the sport or something completely different.

Take Wayne Barnes for example. One of the best referees in the world since arriving on the Premiership Rugby stage, he also practices as a barrister.

Barnes has spoken about his desire to continue practicing law when he decides to call it a day on his rugby union referee career.

Meanwhile, popular Welshman and Rugby World Cup final referee Nigel Owens invested in a farm along with partner Barrie and farming plays a huge part in his life.

Ben O’Keeffe is one of six full-time referees employed in New Zealand but he is also a fully qualified eye doctor, specialising in ophthalmology.

It is important to remember that rugby referees are not necessarily in the sport purely for the money but also for the love and respect that comes with the game.

One of the main questions rugby fans want to know is – how much is a referee paid for the Rugby World Cup final?

It’s an interesting question but one that we don’t really have an answer for. We know that referees are paid a retainer for the tournament and each official is also paid ‘per match’ throughout the competition.

However, financial figures relating to rugby’s biggest competition are almost impossible to find. Considering the impact this has on the World Rugby rankings, you’d have thought such figures would be published.