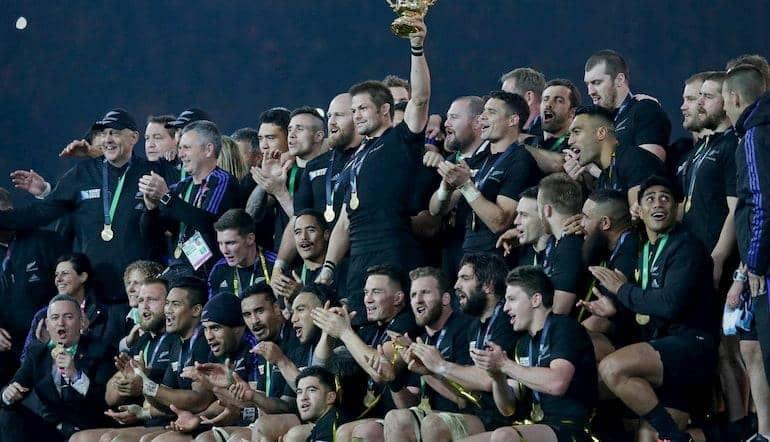 There have been some fantastic rugby union teams over the years, with a number of those coming from here in the United Kingdom.

While rugby union lags behind the likes of football, tennis and cricket, Six Nations matches are shown on free-to-air television each year – which can only be positive for the sport.

Best Rugby Team Of All Time:

The Rugby World Cup is the pinnacle of the sport. Every rugby union player wants to lift the Webb Ellis Cup – though only a select number can achieve that feat.

This list is littered with World Cup winners. Rugby union betting odds would struggle to put these teams in order but we’ve had a go – scroll down for our take on the best international rugby union teams of all-time.

With a young squad and a new coach in Alan Jones, nobody really expected the Wallabies to put up much of a fight when they travelled over for an autumn tour in 1984.

Against all odds, that side made history by becoming the first Australian team to achieve a Home Nations Grand Slam, beating England, Scotland, Wales and Ireland, as well as a strong Barbarians team.

Rugby union fans around the world started to notice Australia as a leading force in the sport – rugby league and cricket had previously been their main areas of expertise.

If you know your rugby, you’ll know of these legends: David Campese, Michael Lynagh and Tommy Lawton. All three played and scored in the 1984 series.

A controversial selection in one sense as the Barbarians only played one match together but it was arguably the greatest ‘one off’ performance in rugby union history.

Rugby betting tips will have had New Zealand as firm favourites but many of the triumphant 1971 Lions team were involved for the Barbarians and that flipped the contest in favour of the hosts.

However, there were also a number of new faces in the side. Phil Bennett, Tom David and – as is tradition with the Barbarians – the uncapped Bob Wilkinson.

Carwyn James will go down as one of rugby’s greatest coaches and his team carried out the masterplan to perfection, recording a memorable 23-11 success in front of a jubilant Cardiff Arms Park.

Not many teams go to New Zealand and win a Test series but the 1984 France side managed to do just that – and they did it in dramatic circumstances.

Les Bleus had prevailed 22-8 in Christchurch in the opening Test match of the series but the tourists found themselves behind with one-minute remaining in Auckland.

The ‘try from the end of the world’ sent the French supporters into raptures and left Eden Park stunned.

It was New Zealand’s first series clean sweep defeat in 45 years. 26 years later, France remain the last team to beat the All Blacks at the Auckland venue.

As far as Lions tours go, the 1974 trip to South Africa was about as good as it gets. In fact, ‘Undefeated’ is well worth a read if you want to learn more about rugby.

The tourist played 22 games in just over two months – an incredible feat in itself. However, the most amazing fact of all is that the Lions went unbeaten on the entire tour.

Willie John McBride had his side well drilled and organised, with world class players in every area of the field. The talent was there and the mentality was spot on.

Controversial refereeing in the final Test match denied the Lions a series whitewash but the players returned home with their heads held high after one of international rugby’s greatest achievements.

South Africa were crowned World Cup winners in 1995 although most Springboks fans will be willing to admit that they were the best team in the competition.

However, South Africa’s victory that year stood for more than just rugby – it was about uniting a country during a very difficult period.

Francois Pienaar was a man mountain throughout the tournament and his performance in the final will live long in the memory with international rugby fans around the world.

New Zealand were clear favourites to win the 1995 final but the Springboks produced one of rugby’s most resolute efforts to snatch an emotional victory in extra-time.

Steve Hansen’s men travelled to England the weight of expectation on their shoulders. They were the defending champions having lifted the Webb Ellis Cup back in 2011.

And the All Blacks didn’t disappoint. Popular in online betting odds before the tournament, New Zealand destroyed their opponents throughout and thrashed Australia with one of the most dominant World Cup final performances at Twickenham.

New Zealand had retained the Webb Ellis Cup and it was the perfect send off for All Blacks legends Dan Carter, Richie McCaw, Ma’a Nonu and Conrad Smith.

The 1970s were a golden era for Welsh rugby. Wales were dominant throughout the decade, winning six Five Nations titles and completing the Grand Slam in three of those years.

Early on in the decade, Wales were unstoppable – winning nine successive Championship matches between 1970 and 1973.

A blemish on that team’s record was a narrow defeat to New Zealand in 1972 but the vast majority of Wales fans believe that this was their greatest ever team.

Later on in the decade, Wales completed two Grand Slams in the space of three years to confirm their status as one of rugby’s elite teams. Had the World Cup been around then, Wales would’ve had a pretty good chance of winning it.

Every rugby fan knows about England’s famous triumph at the 2003 World Cup but Clive Woodward’s side were great for much longer than that.

In the autumn of 2002, England defeated New Zealand, Australia and South Africa before recording a Six Nations Grand Slam in spring 2003. The signs of greatness were there…

Fast forward a few months and England defeated the All Blacks in New Zealand – and they did it while being reduced to 13 men for a 10-minute period.

England looked destined for greatness and Woodward’s men justified the hype in one of the best Rugby World Cup finals of all-time. Jonny Wilkinson’s drop goal is enough to give any England supporter goosebumps.

New Zealand went on an amazing run during this period, going unbeaten in 23 Test matches in a row – with 22 victories in those games.

The All Blacks dominated at the 1987 World Cup, scoring an incredible 43 tries in their six matches at the tournament.

With the likes of David Kirk, Grant Fox, Michael Jones and Joe Stanley playing in the prime of their careers, this New Zealand side was a real force to be reckoned with.

To this day, the 1971 squad are the only Lions team to triumph in New Zealand. Wales were the dominant force in rugby at the time and this squad was built around their star men.

With the likes of JPR Williams, Gareth Edwards, Mervyn Davies and Barry John, live betting odds on the Lions to prevail in New Zealand would have been well worth considering.

However, it wasn’t just the Welshmen who deserve praise for that series success. Gordon Brown, Mike Gibson, Fergus Slattery and David Duckham were all pivotal throughout the series.

The Lions took a 2-1 lead into the final Test match in Auckland and JPR’s dramatic drop goal was enough to clinch a sensational series victory with a 14-14 draw.