Snooker Shoot Out: Everything You Need To Know

What is the Snooker Shoot Out event? We look at the history, rules and previous winners of the latest snooker betting craze... 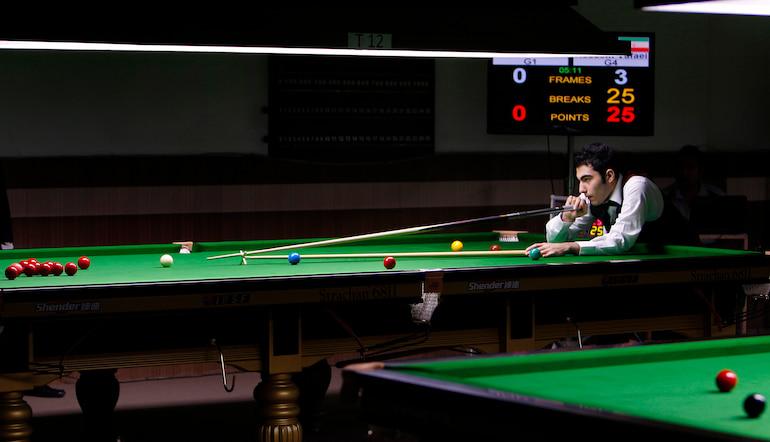 The Snooker Shoot Out is a variation on other headline snooker betting events.

Played under different rules, this tournament is a step away from the tradition of major competitions. It’s an attempt to spice the sport up in snooker’s never-ending attempts to attract a new audience.

A quick glance at the Shoot Out winners list shows this is a tricky event to nail the betting tips for.

Ryan Day was the 2021 champion, toppling the favoured Mark Selby in the final. The 2021 competition marked the first time the event had taken place in Milton Keynes.

The fast pace of the Snooker Shoot Out can draw the attention even of fans who will not usually be lured into snooker when they check out the betting pages.

Read below for the history, rules and more of the Snooker Shoot Out…

What Is Snooker Shoot Out?

Snooker Shoot Out follows on from BBC’s well-liked Pot Black programme from many years ago. Established in 1969, Pot Black was a central factor in snooker’s growing popularity in the coming decades.

Its single-frame format was fast-paced, and made the sport generally more appealing to people who would have their sporting attention focused elsewhere.

With lengthier tournaments getting more airtime, Pot Black began to wane, but the Snooker Shoot Out emerged in 1990.

It wasn’t identical to the BBC’s television-friendly event, yet it carried the same one-frame knockout format with a best-of-three in the final.

The Shoot Out returned 21 years later. Being played in 2011, the world of live sport had changed dramatically. It was shown on Sky Sports and ITV and earned high-profile casino sponsorship.

There was no shortage of big names. The top 64 players in the world competed in the single elimination tournament, which featured several other innovative rules.

Initially played in Blackpool as a non-ranking event, the Shoot Out has moved around the UK, taking place in Reading, Watford and Milton Keynes. The 2022 Shoot Out is scheduled to be played in Leicester.

It is also famed for its wildcard entries, including several female players over the years. While previous years were shown on Sky and ITV, Eurosport and Quest recently secured the rights through to 2026.

This isn’t like other tournaments. The Shoot Out has several notable rule changes, though the introduction of the snooker shot clock is perhaps the most influential.

Frames are capped at a duration of 10 minutes. For the first five minutes of a frame, players have a maximum of 15 seconds to play a shot. In the second five-minute chunk, players have just 10 seconds to hit the cue ball.

This obviously hurries the spectacle along. There’s no time to ponder safety shots. Failure to hit the ball in time results in a five-point penalty or for the value of the ball which was ‘on’, whichever of the two is greater.

Similar to pool, players must also either pot a ball or hit the cushion with any ball whenever they take a shot.

Again, failure to achieve this results in a five-point penalty or a penalty for the value of the ball which was ‘on’, whichever of the two is greater.

Other variations from ‘normal’ snooker include every foul resulting in ‘ball in hand’ and using the ‘lag’ to decide who breaks.

Should a frame end in a tie, there will be a blue ball shootout. The order of play is decided by a ‘lag’, and it’s an attempt to pot the blue from anywhere inside the ‘D’.

When Is Snooker Shoot Out?

The 2021 Snooker Shoot Out took place in early February. The last two events had been played later in the same month.

As of July 2021, it’s unclear when the Snooker Shoot Out 2022 will be held, though it’s fair to expect it to be another February tournament.

Leicester will be the host for the 2022 event. This is the first time it will be played in Leicester, following the 2021 competition in Milton Keynes. The 1990 tournament was in Stoke before Blackpool took hosting duties between 2011 and 2015.

Reading was home to the final non-ranking Shoot Out in 2016, and then Watford enjoyed a four-year stint.

Who Is Playing In Snooker Shoot Out?

The top players in the world are invited to the Snooker Shoot Out. It hasn’t been popular with many of the biggest names in the sport, however, with Ronnie O’Sullivan, Neil Robertson and Judd Trump all sitting out in 2021.

Robertson was publicly furious when it was awarded ranking status, and O’Sullivan has vowed to never play in it again. The 2021 field was still loaded with former world champions, though.

It also provided an opportunity for the best players in the women’s game in Reanne Evans and Rebecca Evans, while several youngsters got a chance to show what they can do.

While that might not sound great compared to the riches at the major events, it’s worth considering that players only have to win six matches to reach the final. That’s six wins to guarantee at least £20,000.

Here’s the complete prize money for the 2021 Shoot Out:

There have been no repeat winners in the history of Snooker Shoot Out. It only became a ranking event in 2017.

Many winners were not near the top of the snooker world rankings at the time of their triumph, but being able to excel under such rules remains a significant career achievement.