A super over is a rare event in cricket - but the term will live long in the memory for England cricket fans. So, what is a super over in cricket? 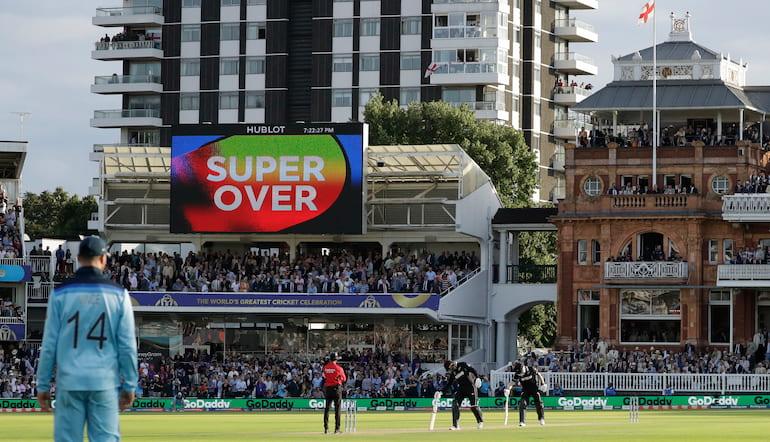 While it might not seem it to experts studying cricket bets online, cricket is a complicated sport. It is a sport which can be daunting to the newbie, a sport with different formats, different rules and various complexities.

The Super Over is just one complication for new cricket fans to understand. It’s rarely seen. It’s dramatic, and it’s pivotal for anyone who has placed a sports odds wager on the winner of a given match.

You aren’t going to see the Super Over referenced in cricket betting tips. It’s only relevant in very specific circumstances, but it’s helpful to know exactly what it is and how it works.

As anyone who watched the 2019 World Cup Final will know, the Super Over happens quickly, and there’s a rush to get to grips with the rules and permutations.

Hopefully this article will help get an understanding of when Super Overs are used and the specific rules. Starting with the rules, here’s a look at the Super Over, the best, the first and Ian Smith’s perfect commentary.

A limited overs match which is officially a tie can go to a Super Over. This has only been introduced relatively recently, with the first Super Over played in 2008.

The bowl-out method had previously been in place for such a scenario – this saw bowlers from each team get six attempts to bowl at the stumps. The team which hit the stumps the most times won.

A Super Over is a different challenge for the teams. Each team selects three batsmen, giving them two wickets for their over. The team which batted second bats first in the Super Over. The bowling team gets to select which end to bowl from.

Depending on the rules of the specific competition, how a tie is reached can vary. This usually just requires both teams to be on the same score after their allocated overs, but wickets have previously been used as a tiebreaker.

If teams lose their two wickets before facing all six balls, their Super Over innings is over. If there is a tie in the Super Over, the winner has previously been decided by a boundary countback.

This can be across the initial innings and Super Over or exclude the Super Over. Sometimes, this has been restricted to sixes hit.

However, following the widespread criticism of the boundary countback to decide the 2019 World Cup Final, the ICC have changed their rules.

When Was The First Super Over?

The first Super Over was a late Christmas present in 2008. New Zealand and the West Indies’ Boxing Day T20 was tied.

Up first with the bat, the West Indies sent in Chris Gayle and Xavier Marshall to face Daniel Vettori. Marshall was run out without facing. Shivnarine Chanderpaul replaced him at the non-striker’s end, and that’s where he stayed.

Gayle unleashed an onslaught that few other players are capable of.

Ross Taylor replaced him and hit a six, before he was bowled. New Zealand finished 15/2. They lost the match, and Brendon McCullum didn’t face a ball.

The pinnacle in the career of some of the greatest England cricketers, the 2019 50-over World Cup Final was cricket at its best.

It is simply the most dramatic match in the history of the sport, played out at its most famous venue under the mid-summer London sun.

The journey to the Super Over was spectacular. England held New Zealand to a reasonable total, but lost early wickets. Ben Stokes and Jos Buttler looked to be guiding the hosts to victory.

When Buttler fell, Stokes was left to perform heroics. He did just that.

A potential catch carried for six, runs off the bat as he dived to make his ground, Stokes married steely nerves with fortune and skill. One run off the final ball meant the first ever Super Over in a World Cup Final.

Ian Smith’s commentary is synonymous with England fans’ memories of that final. Buttler and Stokes returned for England’s Super Over. They set New Zealand 16 to win the World Cup.

Jofra Archer took the ball for England. A wide and a towering six from Jimmy Neesham once again put the Kiwis in control. Archer fought back.

Needing two to win off the last ball, he nailed another full ball. Jason Roy faultlessly fielded in the deep, and Buttler ran out Martin Guptill. The World Cup was England’s.

Sports commentary at its finest is an art form. The best cricket commentators know when not to speak. They know when to ramp it up.

Ian Smith delivered a commentating masterclass on 14th July 2019, a display of emotion, tension and drama that unfolded before his eyes at Lord’s.

With Trent Boult and Ben Stokes matching up for the final ball, Smith’s shock, despair and panic was evident.

Smith shared duties with Ian Bishop and Nasser Hussain throughout the closing stages of the match and the Super Over.

The former New Zealand wicketkeeper was the lead man, though, and it was his commentary which is forever associated with England’s historic World Cup win.

“This is the moment: it’s Archer to Guptill. Two to win. Guptill’s going to push for two. They’ve got to go. It’s … the throw’s got to go to the keeper’s end!