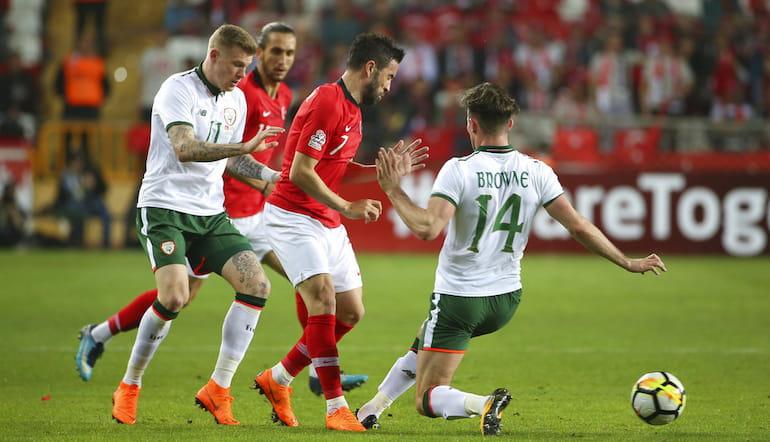 THE most hostile atmosphere I have ever experienced at an international fixture came when Turkey played the Republic of Ireland on 13th November 1991.

I have to say it was also very hostile in my hotel room on that visit to Istanbul – full details to follow!

Let’s start with football matters though. I had been booked to report on the action by London radio station Capital Gold. It was a 7.30pm kick-off at the famous home ground of Besiktas which was called ‘Inonu Stadi’.

So at 12 noon, I decided to visit the adjacent media centre to pick up my press accreditation for the match. But as I approached the entrance, I could hear a ferocious noise coming from inside the stadium.

Anyway, I was handed a ticket and lanyard and went up into the main stand to see what sightlines would be like from my press box seat. It was then that I began to realise what all the commotion was about.

A local journalist explained everything. He told me advance ticket sales for this UEFA European Championship Group 7 qualification tie had been extremely poor. Turkey were bottom of the table having lost every fixture.

So the Turkish Football Federation suddenly announced on the morning of the game that admission would be totally free of charge. In actual fact, they threw the entry gates wide open.

As a result, some 50,000-plus home supporters turned up really early to make sure they would get into the stadium. It was seven and a half hours before the kick-off but the place was absolutely heaving.

The terraces were rammed full of a mass of bodies all screaming, yelling and leaping up and down in unison. Their wailing racket appeared better suited to a swarm of beleaguered banshees.

It was extremely dangerous too as the stadium capacity had been exceeded. Therefore thousands of people were blocking the gangways and exit points. And I spotted violent scuffles outside involving those who couldn’t get in. There were certainly no Health & Safety considerations whatsoever. Pandemonium ruled supreme.

These intense scenes continued all day and throughout the evening when the match commenced. Then every time the Irish players touched the ball, there was a relentless cacophony of whistling and booing. The din was absolutely ear-splitting.

Ireland eventually won 3-1 courtesy of goals by John Byrne (2) and Tony Cascarino. The official attendance was 33,061 but it may well have been double that figure as there was no way of telling how many spectators had rushed through the unlocked gates.

I also faced a picture of total chaos when I checked into my hotel. The odds of what happened to me would be too far-fetched to feature in the betting schedule of any football betting site!

Firstly I can confirm my room was very clean with freshly painted white walls. But the chamber maids had left all the windows open so an assortment of predatory flying insects were encircling my bed.

Wary of being bitten to pieces, I went down to the reception to see if I could change room. However nothing was available as the hotel was fully booked due to that big football match in town.

The receptionist advised me to visit a nearby pharmacy where special incense sticks were on sale. These would apparently alleviate the problem.

A very helpful pharmacist explained in perfect English: “You should burn the incense for one hour. Any insects present will be seduced by the smell and move towards the incense. But the aroma will quickly overpower and kill them.”

So I went back to the hotel and lit a couple of these sticks. I then ventured out for a relaxing stroll along the shimmering Bosphorus Strait and sincerely hoped the situation would be resolved in my absence.

But when I returned to my room I could barely believe what I saw! The white walls had literally turned to black. No word of a lie!

I was nearly physically sick when I realised exactly what had happened. Hundreds of maggots living in the cracks of the walls had sniffed the appealing incense and crawled out towards it before suffocating.

So there was a disgusting floor to ceiling canopy of dead maggots entirely covering the walls. I had to scrape them off using a wet towel before flushing the whole lot down the toilet.

What an incredibly intimidating trip to Istanbul that was for me!