Vivian Cheruiyot will NOT compete at Tokyo 2021 after the 2016 Olympic gold medallist was not included in Team Kenya's marathon squad. 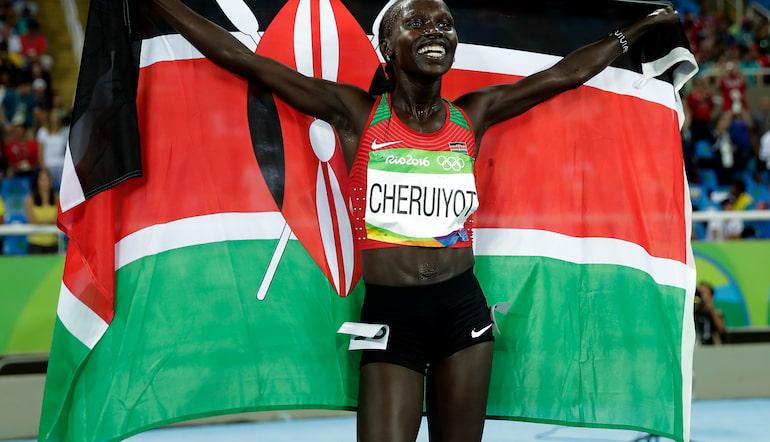 One of the biggest names in Kenyan athletics, Vivian Cheruiyot is an Olympics legend but she will sadly miss out on Tokyo 2021.

Team Kenya coaches opted to drop Cheruiyot from the marathon team just five years after she broke the Olympic record to clinch gold in the 5000m at Rio 2016.

However, her form following that success just hasn’t been up to scratch and the Team Kenya athletics roster is as competitive as ever.

Sports betting fans will have been expecting to see Cheruiyot named in the marathon squad for Tokyo 2021 but Kenya have opted to go in a different direction.

Without further ado, it is time to profile the Kenyan athlete and her career in the sport. It is unlikely we will see Cheruiyot competing at an Olympic Games again…

If you look at Vivian Cheruiyot best times, records and medals, you’ll see a long list of accolades and achievements – both nationally and internationally.

From bursting onto the scene in the World Youth Championships in 1999 to winning the London marathon in 2018, Cheruiyot has achieved everything there is to achieve in the sport.

At 37 years old, her best days are behind her but Cheruiyot will go down in history as one of Team Kenya’s greatest athletes on the track.

The highlight of Vivian Cheruiyot’s career so far was undoubtedly her gold medal performance at the 2016 Olympic Games in Rio de Janeiro.

Competing in the women’s 5000m event, Cheruiyot finally earned her place at the top of a podium at her fourth appearance at an Olympics.

Cheruiyot first appeared at the Olympics in 2000 but had to wait until London 2012 for her first medal. Four years and a baby later, Cheruiyot was about to cement her status as a Team Kenya legend.

A four-time world champion, Cheruiyot knows what it takes to win and she made a move with around 600m remaining to leave her rivals in her wake.

She powered away from Hellen Obiri and Almaz Ayana with that decisive move and she made it stick, breaking the Olympic record while clinching an emotional victory.

After her success at Rio 2016, Cheruiyot made the decision to tackle the most extreme trip of all: the marathon.

Prior to 2017, the Kenyan athlete had competed in the marathon just once but she adjusted quickly to the longer distance, winning the Frankfurt Marathon later that year.

She followed that effort up with a famous victory in the London Marathon in 2018 before going on to finish second in the New York City marathon seven months later.

She just failed to defend her London Marathon title, finishing second to compatriot Brigid Kosgei in 2019 and then slipping down the Kenyan marathon rankings.

With Cheruiyot not selected for Tokyo 2021, Kosgei looks like Kenya’s best chance of gold in the women’s event while Olympic legend Eliud Kipchoge will fly the flag for the men.