Wes Brown EXCLUSIVE Interview With 888sport: Manchester United Are Still Learning How To Work As A New Team

Former Manchester United defender Wes Brown insists any talk of crisis at Old Trafford is wide of the mark with the club remaining a work in progress.

“We’ve had a little dip in form and we’ve not been consistent but for me personally, I think it’s still too early in the season to predict what’s going to happen.

"United have a strong squad and the club have invested in some really good talent. We’ve got to get the right rhythm now and the last few games haven’t been brilliant.

"But it’s like having a new team in a way with the three players we’ve brought in. I still think they’re learning to work together.”

It is a learning curve that the five-times Premier League winner believes should also be extended to his ex-team-mate Ole Gunnar Solskjaer, and this despite many claiming the under-fire Norwegian has taken the Red Devils as far as he can after nearly three years at the helm.

“The managers we had after Sir Alex were massive names, who won lots of stuff at other clubs, and yet still people weren’t happy. This is a huge club for Ole to be at and he is still learning but he now has the squad I think to challenge for trophies.

"Everyone is tough on Ole because United are expected to win every week and that’s understandable. But over the last two seasons we’ve been third and second in the league so there is a consistency there.

The pressure on Solskjaer to produce the goods heightened considerably over the summer when United made a sensational swoop for Cristiano Ronaldo, tempting the superstar back to the Theatre of Dreams after an absence of 12 years.

Having played alongside CR7 for the entirely of his first spell in the Premier League, Brown knows exactly what qualities accompanies the almost inevitable magic.

“He has been fantastic throughout his career and that was true of the first time around at United, when he was just a kid.

"He brings a lot for the group: his personality and the standards that he sets. He’s turned himself into one of the best strikers to ever play the game and he will score lots of goals for us.”

Brown has been astonished by the 20-year-old’s development even after closely following his progress through the ranks.

“Mason has impressed and surprised me. We always knew he was very special as a kid but when you take that step up, it’s different. The mentality that he shows when he’s on the pitch is brilliant.

"He knows he has great skills but still, he’s making it look easy. He hits the target more than not and his natural ability is up there with the best.”

Still, for all this positivity it must be said that Manchester United are not going through the best of spells right now, with two defeats and a draw sending them crashing down to sixth.

With Liverpool, Spurs and Manchester City on the horizon, along with two crucial Champions League fixtures against Atalanta, is it fair to suggest this next month is make or break for the Reds’ season?

“These are the best games and when we do play the top four we normally do okay. We usually come unstuck against the other teams. It’s going to be interesting because if we win all of them then all ‘this’ blows over.

"But if we lose three or four it would be a big blow as regards to the season. These are our title rivals and these are the games we need to be winning to stay up there.” 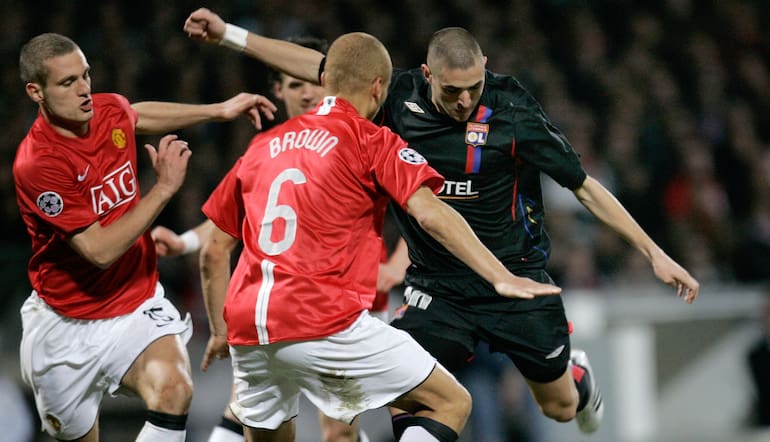 First up is Liverpool, a contest that the whole world tunes in for, gripped by the fierce rivalry that never fails to produce plenty of drama.

Is Brown fearful of a repeat performance from last season that saw the Merseysiders run out comfortable 4-2 winners, especially with Mo Salah in such prolific form at present?

“Manchester United are going to have to be on it but what’s true of this fixture is that it doesn’t really matter who are on top when this game comes around.

"When I played, we were always ahead of Liverpool in the league but that didn’t necessarily mean we would win. Everyone steps up and we will have to play very well to stop that front three regardless.

"Liverpool are in good form and good shape mentally and they will be looking to win the game. With the counter attacking players that we have we can take advantage of that.”

Of which Ronaldo and Greenwood spring readily to mind, but also Marcus Rashford who boasts a terrific record in this fixture, scoring five in his last five ‘M62 derbies’.

Even a further strike to down Jurgen Klopp’s side however would pale to Rashford’s achievements off the pitch in recent months, tackling child poverty via tireless campaigning. From one Mancunian to another, Brown is full of admiration.

“Marcus has seen the situation that some people have to cope with and with his stature he has called a few people out.

"He’s done a fantastic job not just for Manchester but for the whole country and he’s one of those lads who sees things happen and wants to do something about it, because he can.

"It’s been amazing and being a Manchester lad, he’s done us all proud.”

Premier League Tips
Football Interview
About the Author
By
888sport