World Series Trophy – What Is The Commissioner’s Trophy?

The World Series trophy is one of the most unique in sport - here is everything you need to know about the MLB Commissioner's Trophy... 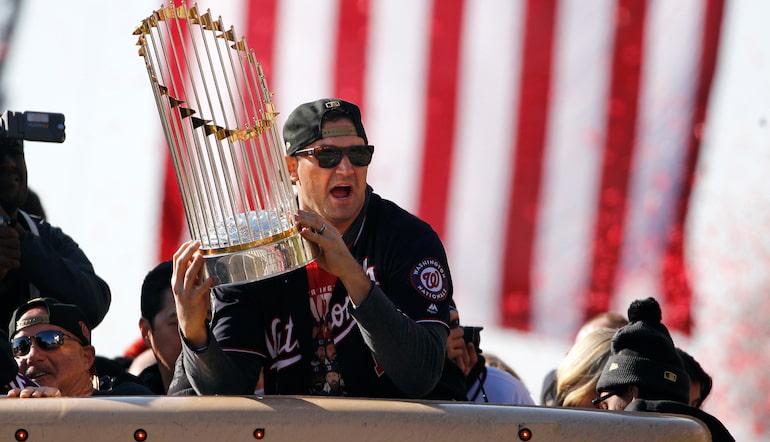 Scrolling through the MLB odds pages can take you in any direction, but it all ultimately leads to one place: The Commissioner’s Trophy.

The Commissioner’s Trophy is handed out to the World Series winners every season.

Those betting on baseball frequently are constantly speculating about which teams are best placed for a World Series run – every franchise enters Spring Training with dreams of lifting the famous trophy.

The best MLB dynasties are more than familiar with the Commissioner’s Trophy than most. For those that haven’t had the honour of holding it aloft, though, here’s all you need to know about MLB’s greatest prize.

The Commissioner’s Trophy was first awarded in 1967. It was a series loaded with Cooperstown talent – the St Louis Cardinals beat the Boston Red Sox in a seven-game series on the back of yet another heroic effort from Bob Gibson.

Those two iconic franchises have featured in baseball betting tips frequently since the Commissioner’s Trophy was first awarded.

Only the Yankees have won the World Series more than St Louis and Boston since 1967 – the Cardinals and Red Sox are tied with the Athletics on four World Series triumph apiece.

The Los Angeles Dodgers, one of a triumvirate with three World Series wins since 1967, are the most recent team to lift the trophy after beating the Tampa Bay Rays in the 2020 World Series.

The Giants and Reds are tied with the Dodgers on three World Series each since the Commissioner’s Trophy was introduced.

Made of sterling silver, the Commissioner’s Trophy features 30 flags, representing every team in Major League Baseball. The flags stand up from a silver base, which has longitude and latitude lines, intending to represent the world.

The silver base contains an engraved signature from the Commissioner.

It also has the phrase ‘Presented By The Commissioner Of Baseball’ – the Commissioner comes onto the field at the end of the World Series to present the trophy to the winning team.

A company by the name of Balfour Jewelers designed the original 1967 version.

This was worth around $20,000 accounting for inflation, but Tiffany & Co. re-designed a new version, which was unveiled at the turn of the century.

How Tall Is The World Series Trophy?

The Commissioner’s Trophy is 24 inches tall, excluding the base. It’s got a diameter of 11 inches.

This makes it almost 10 inches taller than the FIFA World Cup trophy, but considerably shorter than the Stanley Cup, which is over 35 inches tall in totality.

To give further comparison: The Super Bowl trophy, also made of sterling silver, is almost exactly the same height at the Commissioner’s Trophy.

The UEFA Champions League trophy is slightly taller than both, but still considerably smaller than the gargantuan Stanley Cup.

The trophy weighs roughly 14 kilograms. This is almost double the weight of the Champions League, and almost as heavy as the Stanley Cup.

Although not the biggest of the major sports trophies, MLB’s offering is among the heaviest. This is apparent when players are celebrating after winning the Fall Classic.

While NFL players are holding the Vince Lombardi Trophy above their heads one-handed, the Commissioner’s Trophy is usually clung onto with both hands.