90s Footballers: From The Decade's Greats To Cult Heroes

Who are the greatest 90s footballers to play the beautiful game? We look at the best players plus some cult heroes from the era... 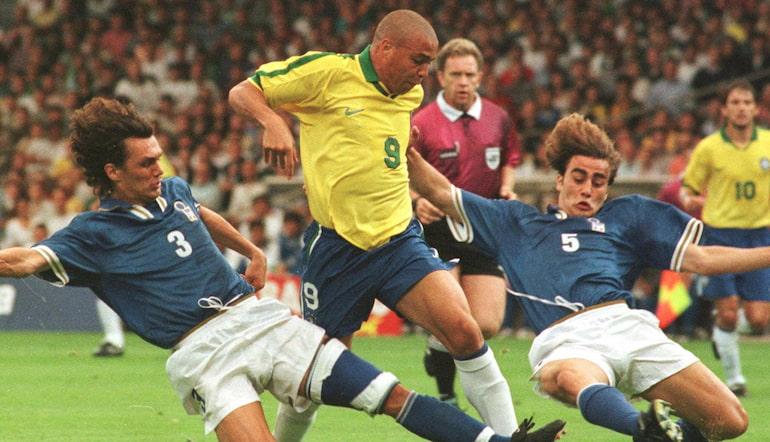 Looked back upon fondly by those who bet on football, the 1990s was a decade of major change across the sport. The money involved soared, the Premier League was created, and some of the greatest teams of all-time were formed.

The balance of power in Europe was different to the 2020s. Italy reigned supreme through much of the 90s with Serie A clubs featuring in eight European Cup/Champions League finals in the decade.

English football was re-establishing itself on the biggest stage, capped off by Manchester United’s treble in 1999.

An influx of foreign talent boosted the standard of the top flight of the English game. On the international stage, Denmark and Germany became European champions.

Germany kicked the decade off with a World Cup win in Italy followed by Brazil’s triumph stateside and France’s glory on home soil.

The football tips landscape was different. The 90s was a unique time with loud kits and big personalities. Let’s take a look at some of the decade’s iconic figures…

Winning the Ballon d’Or in 1998 after a third-placed finish the year before, Zinedine Zidane was the best player in the world for several years in the 90s.

The star of France’s World Cup win and excelling as Juventus won back-to-back league titles, Zidane had the team success to accompany the widespread praise for his individual skill. His awareness on the field set him apart from mere mortals.

The ability to retain possession in the tightest of situations was unmatched throughout the 90s, and once he’d kept the ball, he had the vision and technique to pick out a teammate or find the net himself.

While not a goal scoring favourite in betting odds, Zidane could bend matches to his will in a way that few players can at the highest level.

Starting his club career in 1984 and playing until 2009, Paolo Maldini would be included among the best footballers from the 1980s and 2000s, too. That’s how great he was for so long for Italy and Milan.

Whether used at full-back or in the heart of defence, Maldini was immense. His defending was seldom spectacular, but he didn’t need it to be, thanks to his unwavering calm and ability to read the game.

He won five Scudetti and a Champions League with Milan in the 90s. Wearing the blue of Italy, the one-club man picked up a World Cup runners-up and third place medal in 1994 and 1990 respectively.

For Blackburn and then Newcastle, Alan Shearer dominated Premier League predictions in the 90s.

An old school centre forward in a modernising English game, Shearer terrorised defenders as Blackburn won the title in 1995 and he became the world’s most expensive player the following summer.

Shearer was named in the Team of the Year six times in the 90s. He finished third in the 1996 Ballon d’Or, won the Golden Boot at Euro 96 and finished as the Premier League’s top scorer in three consecutive seasons.

With a nickname like O Fenômeno (The Phenomenon) and two Ballons d’Or to his name, the original Ronaldo was obviously one of the best 90s footballers.

Establishing himself in Europe with PSV in 1994, Barcelona then Inter broke the world record fee to sign him.

Ronaldo, like many players from his era, is remembered fondly. Many label him as the greatest striker they’ve seen. Injuries ultimately cut short his prime and meant his career statistics are not as gaudy as they could have been.

Peak Ronaldo was like no other, though. It is not rose-tinted to suggest he’s the best centre forward of the last three decades.

Signed by Kevin Keegan at Newcastle in 1996, Tino Asprilla had a perfect start to life in English football, starring as the Magpies beat Middlesbrough.

While entertaining on the pitch, and providing Newcastle fans with some memorable moments (including a hat-trick against Barcelona), it was Asprilla’s life away from St James’ Park which drew the most attention.

Asprilla had a reputation for enjoying a night out or two. Speaking to FourFourTwo, he said, "The women were divine. I had...well, I don't know how many girlfriends I had in Newcastle. At the beginning I didn't even understand what they said."

Unpredictable and possessing supreme natural talent, Asprilla was must-watch whether up front, behind the striker or on the wing. He finished with 18 goals for the Magpies across two and a half campaigns.

When Juninho penned a contract with Middlesbrough in 1995, Brazilians were not commonplace in the Premier League.

His arrival was greeted with a tidal wave of excitement in the northeast as Boro added flair and unquestionable star quality to their ranks.

Standing at just 5’5 but with mesmerising close control, Juninho was immediately effective in the Premier League and enhanced his cult status with tales of joining in street football in the city.

A torrid 1996/97 saw the club lose two finals and get relegated. Juninho departed that summer for Spain, though he returned on loan a couple of years later and re-signed permanently in 2002.

For a player who made just 66 starts for Leeds, Tony Yeboah has a rock-solid place in English football history. The return of 32 goals is impressive enough, but the Ghanian striker’s legacy is built upon the nature of his goals.

Frequently scoring screamers, Yeboah’s two thunderous volleys against Wimbledon and Liverpool are among the best goals in Premier League history.

Yeboah was adored in Leeds and beyond. He left Yorkshire after a couple of seasons, but he will forever be remembered fondly by the Elland Road faithful.

It’s hard to be universally liked in football. Gianfranco Zola must be pretty close to that feat.

Always playing with a smile and often leaving spectators with a similar grin, Zola didn’t rack up huge goal tallies, yet he was integral to successful Chelsea sides in the pre-Abramovich era.

Quickly winning FWA Player of the Year upon his arrival in England, Zola was the star man as the Blues won a couple of FA Cups, a League Cup and the UEFA Cup Winners’ Cup in the late 90s.

He might have never lifted the Premier League trophy, but the diminutive Italian was voted as Chelsea’s best ever player in 2003.