Roger Federer topped sport's highest earners list in 2021 but who else made the list of the top paid athletes? 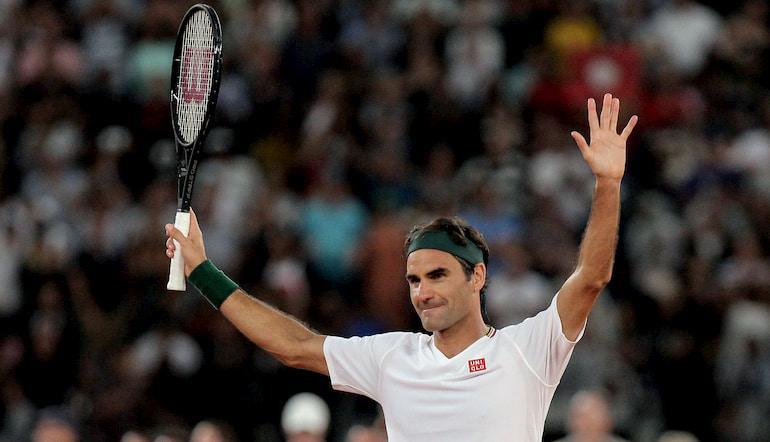 The financial figures in sport are enormous. The highest-paid athletes in the world make tens of millions per year.

While salaries take the headlines, like an NBA’s supermax contract or a footballer’s weekly wage, a lot of the biggest names in the world of sport collect a significant proportion of their income from endorsements or other business interests. 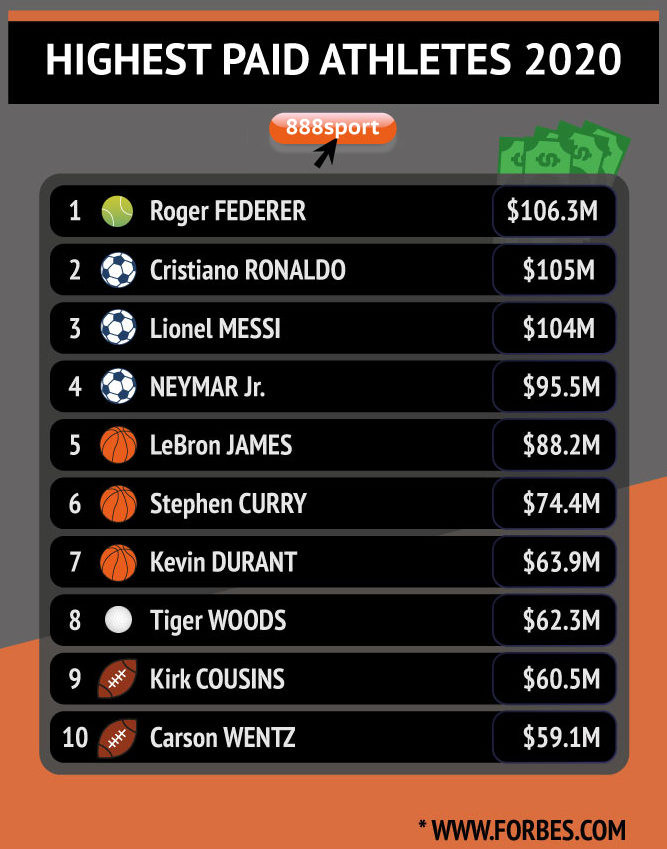 The top 10 highest-paid athletes on the planet in 2021 according to Forbes is a list of names anyone interested in sports betting will be familiar with.

With a $16.4 million signing bonus plus a $40 million option bonus paid in March 2020, Wentz has been raking in the cash and it is no surprise to see the Eagles star feature in the Forbes 2020 rankings.

With endorsements for the likes of Nike, Amazon and NRG, Wentz has a wealth of advertising deals on his portfolio and he could climb further up the highest paid athletes charts in the coming years.

Cousins became one of the highest paid players in NFL history in March 2020, signing a two-year contract extension worth $66 million. This deal also included a $30 million signing bonus.

The quarterback joined the Minnesota Vikings in 2018 after six seasons in Washington, securing £84 million guaranteed on his contract - a rare feat in the National Football League.

That deal made him the league's top paid athlete between June 2019 and June 2020 and he will be hoping to take the Vikings to the Super Bowl in the near future.

The iconic figure in golf for most of his career, Woods has been a regular in the Forbes highest-paid athletes rankings over the last 20 years.

Since turning professional in 1996, Woods has earned a staggering $1.5 billion in endorsements, appearances and course design fees.

He has been involved in a number of projects off the course, with HarperCollins acquiring the rights to "BACK" - the first set of memoirs authored by Woods. He is a massive character in the sporting world.

Only a few players will get a maximum contract after an injury as serious as Durant’s.

There’s uncertainty of how effective he’ll be when he returns to NBA action, but if he’s anywhere near the player we saw in Oakland, the Brooklyn Nets will be legitimate title contenders.

Durant missed much of the 2019 NBA playoffs, coming back in the Finals and suffering an injury that ruled him out of not just the series, but the following season too.

He waved goodbye to north California a matter of days later, signing with his close friend Kyrie Irving in Brooklyn.

The Golden State Warriors’ dynasty came to an end in 2019. Kevin Durant departed for the Brooklyn Nets in the summer following an Achilles injury in the NBA Finals.

However, Steph Curry has continued to carry the franchise - justifying why he is one of the highest paid NBA players.

Steph Curry was left without Thompson and Durant, and showed once again why he’s one of the greatest to take the hardwood.

The Warriors took the 2019/20 season off, but with Curry – the second-most recognisable face in the sport – they could be back in title contention next season.

If it was possible for LeBron James to become more visible, a move to the Los Angeles Lakers has done so.

James’ $53 million in endorsements is bettered only by Federer on this list to go alongside his maximum contract with the storied Los Angeles franchise.

The four-time MVP had his worst year in 2019, suffering a groin injury on Christmas Day and missing the playoffs the first time since his first stint in Cleveland.

The summer months brought better news, however, as the Lakers gave him a fellow All-Star when they traded for Anthony Davis. A fourth NBA title could be on its way for LeBron if the NBA season resumes.

The Paris Saint Germain experiment is yet to reap rewards on the European stage, but Neymar and co. continue to collect silverware in France.

Neymar’s 2020 income is befitting of where many see him in world football: the best non-Messi, non-Ronaldo player on the planet.

He’s a player who divides opinion. The diving antics have turned many against him, and the decision to go to Paris to have his own team and take these astronomical wages leaves Neymar with an uncertain position in the sport.

His numbers remain staggering (around 1.5 goal contributions per match in Ligue 1), but PSG’s Champions League failures are an issue for Neymar’s standing in the sport.

Neymar is a common example when criticisms are paid of how much footballers are paid. Has he, or will he, ever live up to his potential?

Although third on the list of earnings during the 2010s, Lionel Messi has had to settle for second or third in most years past. That all changed in 2019 as his salary and endorsements took a major leap despite a public spat with Barcelona’s hierarchy.

Unfortunately, he slipped down the pecking order in 2020 but he remains one of the highest paid sportspeople on the planet.

Messi now leads the way with the most Ballon d'Or wins and he remains as influential as ever at Camp Nou. He’s well into his thirties, but he remains the undisputed best player in the world, and he continues to carry what is a flawed Barcelona team to trophies.

A first year in Italy brought a Serie A title to go alongside Champions League, La Liga, Euros and Premier League winners’ medals.

Unsurprisingly, Cristiano Ronaldo was awarded Serie A Footballer of the Year for 2019 to accompany his five Ballons d’Or and countless other individual accolades.

Ronaldo has been superior to Messi financially for much of his career, and his endorsement revenue remains almost $10 million greater, but he will have to settle for second spot in 2020.

The long-time rivals have been ever-presents at the top of Forbes’ list but we have a new sports athlete at the top of the highest-paid athletes rankings now...

His $86 million in endorsements is by far the biggest figure on this list. Federer is extremely marketable – he’s universally well-liked and has been at the top of his craft for the best part of 20 years.

The 2020 tennis season has been something of a write off for Federer, though he is still able to hold his own against the best tennis players around despite his age.

A semi-final loss at Roland Garros was better than many expected, but the epic final loss at Wimbledon to Novak Djokovic was gutting. 2019 was his first year with no Grand Slam success but the Swiss' bank account may cheer him up.