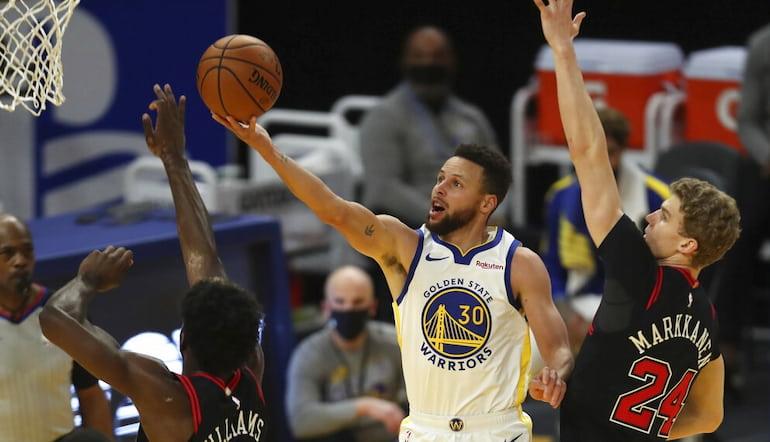 Steph Curry was already a consensus top-15 player in NBA history. Then, he led the 2021-22 Golden State Warriors to his fourth NBA title, playing the best basketball of his career.

Curry produced a playoff run for the ages, with the Dubs overcoming NBA odds to see off the Boston Celtics in six games. The 2014-22 Warriors is one of the most successful NBA teams of all-time.

Curry put the Dubs on his back in 2022, producing two-way excellence throughout, including a majestic Game Four in Boston.

Most had him below Kevin Durant on the list of the greatest players in NBA history, but he has leapfrogged his former teammate with his fourth ring and first Finals MVP.

Jordan, James and Kareem are the only three that are indisputably in front of Curry.

There’s a real debate about the best point guard of all-time between Curry and Johnson, putting him ahead of Robertson. Curry is climbing the career points and assists lists at a pace. He’s already the three-point king.

Away from the raw numbers, though, Curry’s legacy is underlined by leadership and impact.

This Warriors dynasty is built on Curry; his off-ball movement is unlike any other superstar in NBA history, his hustle and activity on defence sets an example for those around him.

That is before it is even mentioned how Curry has bent the dimensions of basketball with his unparalleled range.

This is a franchise which has dominated NBA betting for the best part of a decade. It is, as Steve Kerr said after Game Six, all about Curry.

Even when Durant was potentially the best player on the team, those two titles were built on the foundation of Curry and, to a lesser extent, Klay Thompson and Draymond Green.

Curry is one of the highest earning NBA players ever. He’s earned every cent. There is no controversy in having him ahead of Durant all-time.

The same goes for Robertson. The question, then, for Curry being top 10 is whether he can get ahead of any of the other players listed?

The answer has to be a resounding yes. If it’s aggregate numbers you want, Curry should finish as a top-20 scorer. Getting to 7,000 assists is well within reach.

Of course, the Dubs are again legitimate title contenders in 2023 and beyond – more rings and Finals MVPs are possible.

13 years ago today, Steph Curry was selected by the Warriors with the No. 7 pick in the 2009 NBA Draft.

Now, he is a four-time NBA champ 👏 pic.twitter.com/GQ4Wd5oB8A

Curry is at least top five ever in pure impact on the sport. For a player so unique, Curry has even tweaked his game over the last couple of years to meet the demands of the team.

He’s stronger and more durable than earlier in his career, able to play through contact on the way to the basket and playing the best defence of his life.

On his peak brilliance, longevity or legacy, a compelling argument can be made to have Curry over anyone other than Jordan, LeBron and Kareem.

It is a very different kind of dominance to that of Chamberlain, Olajuwon or O’Neal, and his game-to-game influence is genuinely unique, but the whole package is enough to make Curry a lock for the top 10.