The 10 Shortest Players In NBA History 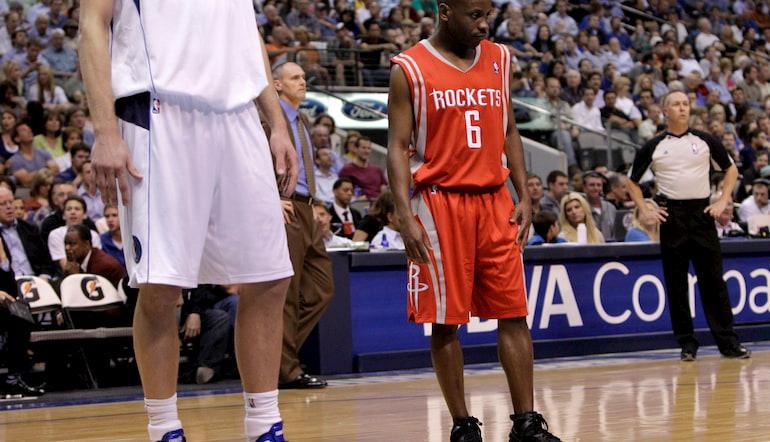 It’s no great revelation to say that height matters in basketball. We already covered the tallest players in NBA history, this time it’s the turn of the guys at the other end of the spectrum, the 10 smallest players to play in the league.

Those who are looking to bet on basketball will not be used to players under six feet tall.

The guys on this list are way below that mark – they are all at least 12 inches shorter than LeBron James and a foot and a half shorter than Kristaps Porzingis. Here are the 10 shortest players in NBA history…

Drafted 12th overall, Muggsy Bogues played his rookie year alongside Manute Bol, the second-tallest player in NBA history. He’s best known for his time with the Charlotte Hornets, who selected Bogues in the 1988 expansion draft.

Bogues is a franchise legend for Charlotte, having spent a decade on the Hornets and featured on several competitive teams. He leads the franchise in minutes played, assists and steals, and famously blocked Patrick Ewing while playing for Charlotte in 1993.

Later playing for the Warriors and Raptors, Bogues also starred in Space Jam alongside Michael Jordan, Ewing and other NBA stars. He is one of the most universally loved players in recent memory.

Having grown up playing against men, Earl Boykins was prepared to play as an undersized guard in the NBA.

It took a while for him to stick after being drafted, but he got his break when the Denver Nuggets signed him to a five-year contract ahead of the 2003-04 season.

He was traded to the Milwaukee Bucks towards the end of that pact, however, and then signed a one-year deal with the Hornets before moving to play in Italy.

Success followed in Europe, but he was released by Virtus Bologna in 2009 and returned to the NBA with the Washington Wizards, Bucks and then Houston Rockets. He played his last NBA game in 2012.

The smallest NBA player during his spell with the Boston Celtics in the 1940s, Hirsch held the record as the shortest player in league history for four decades.

Hirsch made his name as a guard at Brooklyn College, but served in the US Army following his graduation and didn’t make it to the league until 1946 – he only played in 13 games for Boston.

Greg Grant’s journey to the NBA was an unusual one, but he stuck around in the league, playing for six different teams across nine seasons.

His minutes were low throughout his career, but he was clearly a handy player to have coming off the bench. He started just twice in his 274 NBA games, finishing with career averages of 2.8 points per game and 2.7 assists.

Despite earning a spot on the second-team consensus All-American in college, Keith Jennings went undrafted in 1991 before being picked up by the Golden State Warriors.

His best performance came in his penultimate game, and he was taken by the Toronto Raptors in the 1995 expansion draft, but never played for the Canadian franchise.

Jennings’ career then headed to Europe, where he played until 2004 and he has since gone on to become a coach.

The Warriors are set to be an 888 betting favourite again next season, but they were not as competitive in Jennings’ time – they never got past the first round of the playoffs.

With just 11 games played and a mere 15 points, Red Klotz was unable to make much of an impact on the court, but he hung around long enough to become an NBA champion. He’s the shortest player in league history to win it all.

The Baltimore Bullets, who Klotz played for, folded in 1954, making them the most recent NBA franchise to fold and the only former franchise to have won a title.

A history maker. Wataru Misaka was the first non-white and first Asian player to play in the NBA when he made his debut for the New York Knicks in 1947.

Misaka played just three games for the Knicks before he was cut, but he didn’t believe this was due to discrimination, claiming it was simply that the Knicks had too many guards.

His on-court performances might have been unremarkable, but Misaka’s time in the NBA will forever be significant.

Monte Towe didn’t stick around like others on this list. He does, however, own the record for being the shortest player in the original ABA.

Towe played in the final ABA season for the Denver Nuggets, who took him in the third round of the draft and played one year for Denver once they had joined the NBA. His playing career came to an end and he turned his attention to coaching.

Owning the very cool accolade of being the shortest Slam Dunk Contest entrant ever, Spud Webb had a long NBA career after being selected 87th overall in the 1985 draft. He’s best known for his spells with the Hawks and Kings.

Webb had superhuman bounce, as one might assume for a 5’7 dunk contestant. He was written off as a youngster but defied all expectations to not only make it to the NBA but become a long-term point guard.

Charlie Criss was the shortest active player when he entered the league in 1975. He spent the first five years with the Atlanta Hawks, and averaged 8.6 points per game over that span with a useful 3.4 assists per contest, too.

Traded to the San Diego Clippers in 1982, Criss has a strong 28 games in California before signing with the Milwaukee Bucks as a veteran free agent.

His career was on the wane by that point, though, and he got minimal minutes from the bench before returning to Atlanta to finish out his NBA career.