Who are the greatest boxers of all-time? We look at the top 10 best boxing stars to step into the ring... 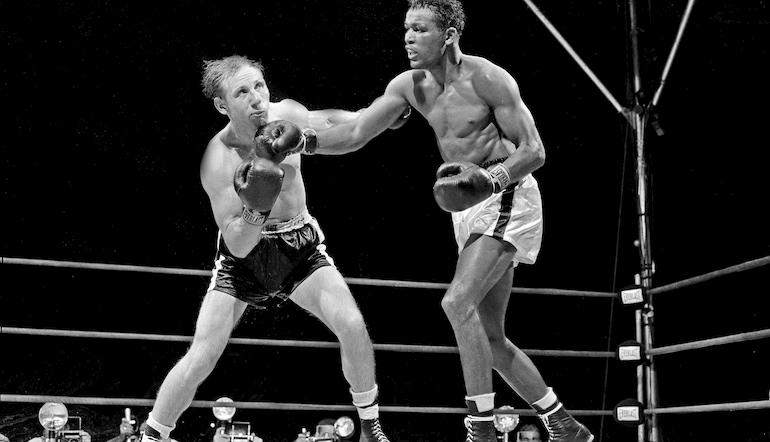 Boxing is arguably the most physically demanding sport, with a focus on strength, stamina and speed. To go to the summit of the sport, you need all three in abundance.

From the flyweight ranks all the way up to the heavyweight division, you need that hunger and desire to succeed in boxing and the ultimate goal is to become a world champion.

Most of the greatest boxers of all time have won multiple world titles or in multiple weight classes. That is what separates the great from the greatest, as well as their atittude and charisma - particularly with boxing quotes in press conferences.

Greatest Boxers Of All Time:

There has been a clear shift in the balance of power in boxing, with the United Kingdom now dominating various weight classes at the highest level of the sport.

However, the majority of this top 10 best boxers of all-time list hail from the other side of the Atlantic Ocean. Historically, the United States of America are the biggest superpower in boxing.

Without further ado, it is time to count down the 10 greatest boxers to step into the ring. Could we see one of today’s boxing stars feature on this list in the future? Never say never…

Holyfield scrapes into our greatest boxer of all-time rankings but he deserves his spot on the list. To this day, he is the only boxer to become undisputed champion in two different weight classes.

The king of the cruiserweight division in the 1980s, Holyfield stepped up to heavyweight the following decade. The American recorded wins over the likes of Buster Douglas and George Foreman before clinching a famous upset against Mike Tyson in 1996.

This is not a typo: Guglielmo Papaleo won 230 of his 241 professional fights, making him one of the winningest boxers of all-time. ‘Willie Pep’ was the fighter of his era and it was a joy to watch him go to work.

The undisputed greatest featherweight boxer to step in the ring, he had a unique blend of speed and power that put him a class above his peers. So often overlooked in the greatest boxer of all-time debate, Willie Pep is in the conversation.

Leonard was named the 1980 Boxer of the Decade and it is easy to see why. Throughout his illustrious career, Leonard won professional titles in five different divisions – an incredible achievement.

The icing on the cake was his victory over Roberto Duran to clinch the WBC welterweight champion. Leonard has previously lost to Duran but righted that wrong with a famous win that will live long in the memory with older boxing fans around the world.

Longevity is a major reason for his inclusion on this list. You rarely see a boxer hold their own for a prolonged spell but Hopkins did just that – winning the IBF middleweight title in 1995 and the IBF light heavyweight title in 2013.

Named Fighter of the Year in 2001, Hopkins was an undisputed champion and held titles at both middleweight and light heavyweight level. An underrated character in so many ways, Hopkins is one of the best boxers of all-time.

Tyson is a household name with boxing fans around the world and the ‘Baddest Man on the Planet’ was destined for greatness from a very young age. Stepping into a boxing ring with Tyson was like signing your own death warrant.

He is the youngest man in history to win the undisputed heavyweight championship – which is some feat in itself. In addition, he became the first man to ever unify and hold the WBC, IBF and WBA titles at the same time.

A controversial figure, many boxing fans would have Mayweather further down this list. His style was methodical and calculated but ‘Money’ is arguably the greatest boxer of all-time when it comes to defensive boxing skills.

Mayweather was box office. A 15-time winner of major titles across five weight classes, the American finishes his career with a perfect 50-0 professional record and that gives him an edge over many of his rivals when tackling the best boxer of all-time debate.

Armstrong was dominant in the 1930s and 1940s but his legacy as one of the greatest ever boxers has stood the test of time. He was the dominant force in boxing and is still regarded as a supreme fighter.

He knocked out 27 consecutive opponents – a record that is enough to raise the eyebrows of any boxing fan. Meanwhile, he won world titles in three different weight classes and defended the welterweight belt a grand total of 18 times.

Dominating the heavyweight division is no easy feat but Louis made it look like a breeze, winning 25 consecutive title defences and keeping the belt for over 140 months. Over a 15-year period, Louis had a 60-1 record with a sensational 51 knockouts.

Nicknamed the ‘Brown Bomber’, Louis is also remembered for his rivalry with German boxer Max Schmeling. Having lost to Schmeling in 1936, Louis knocked him out in the first round of their rematch. The rest, as they say, is history.

Ali won Olympic gold in Italy in 1960 and his career went on an upward trajectory from there. By the age of 22, Ali was the world heavyweight champion after defeating Sonny Liston in a thrilling contest.

He was involved in one of the best boxing rematches of all-time with George Foreman and the Thrilla in Manila battle with Joe Frazier is known around the world. Ali’s impact on boxing was fantastic but his impact on society and culture was his biggest achievement.

Unbeaten in 91 consecutive bouts over an unprecedented eight-year period, Robinson is the greatest boxer of all-time. You could make a case for almost all of these fighters to rank at number one but Robinson is the most worthy contender.

Standing at 5 foot 11, Robinson was hardly a monster to look at but what he lacked in size he made up for in professionalism and skill. Robinson dominated two different divisions and kept himself at the top of the sport for 25 years.