Reports are claiming that Anthony Joshua will fight Tyson Fury in 2021 – but which British heavyweight will come out on top? 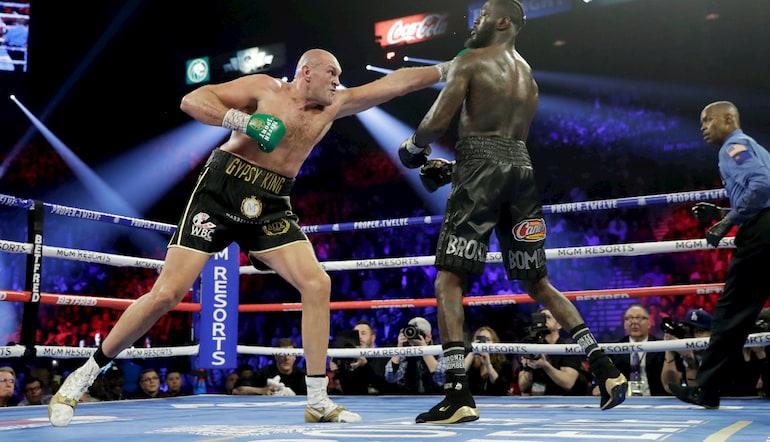 It is now surely only a matter of time before the biggest fight in British boxing history is officially confirmed. Boxing betting fans, you won’t want to miss this bout.

Promoters have confirmed that discussions are underway for a huge double header between Anthony Joshua and Tyson Fury – an event that has already been billed as the biggest heavyweight bout of all-time.

While Joshua’s promoter Eddie Hearn has hinted that the fight could take place outside the United Kingdom, British boxing fans will be hoping that this is not the case.

These two fighters could sell out Wembley Stadium five times over and the demand for this bout will be unprecedented. The longer the hype, the more anticipation for the fight.

And the boxing world has been hyping up this fight for quite some time. For possibly the first time ever, Britain is home to the two best fighters in the heavyweight division.

Early sports betting odds have Fury as the 1/2 favourite to beat Joshua – which is probably a fair price after his demolition job of Deontay Wilder back in February 2020.

At his brilliant best, Fury is undoubtedly the best heavyweight boxer on the planet.

The Gypsy King was dominant from start to finish in that bout, bullying the American fighter around the ring until the referee waved the fight off in the seventh round.

If Fury manages to keep on top of his demons, the sky is the limit. He has an opportunity to cement his status as one of the all-time heavyweights and it would take a brave man to back against him in this fight.

Fury’s journey back to the summit of the boxing world has been inspirational to say the least and ‘the Gypsy King’ is now back to his brilliant best.

The famous Fury swagger is back and British boxing fans will be looking forward to what could be a fight for the ages.

Meanwhile, Joshua has been destined for greatness since exploding onto the scene at the 2012 Olympic Games.

He took to professional boxing like a duck to water and it wasn’t long before he was involved in his first world title fight.

Punters looking to learn more about boxing should study Joshua’s ring presence. He is one of the best at controlling the centre of the ring and that can be crucial in tight fights.

It will take a special kind of shot for Joshua to put Fury down. Boxing fans around the world will remember that Wilder strike in the 12th round of their first bout – Joshua may need to rely on an out-of-this-world punch.

However, Joshua is probably one of the few fighters who boasts the power needed to knock Fury to the canvas.

That uppercut against Wladimir Klitschko will live long in the memory for British fight fans and it remains one of Joshua’s most dangerous weapons.

Both men have a victory over Klitschko on their records – which shows just how talented the two Britons are.

Fury dominated Klitschko in his own backyard in November 2015, around 18 months before Joshua’s knockout success against the Ukrainian at Wembley Stadium.

A heavy underdog going into the Klitschko bout, Fury overcame adversity to claim victory on that fateful night in Dusseldorf.

All of the signs pointed towards a Klitschko triumph but Fury had his number from the opening round and he was always in control.

Meanwhile, Joshua was widely expected to beat the Ukrainian when they went toe-to-toe in London.

Klitschko forced Joshua to find a new level though, dropping the British fighter early on in the bout before the younger man prevailed.

Fury’s victory over Klitschko was methodical while Joshua defeated the Ukrainian in more explosive fashion.

Shrewd boxing fans will be closely following in play betting odds throughout the clash – it wouldn’t be a huge surprise to see Joshua make a fast start but Fury could exploit the 2012 Olympic gold medallist in the later rounds.

The obvious ‘win by method’ bet is for Fury to win on points.

At the time of writing, Fury is undefeated but struggles to knock his opponents out – Joshua is also experienced enough to hang in there.

Patience will be key to Joshua’s chances of success in this fight.

The Watford fighter cannot afford to go too gung-ho or else risk exerting too much energy in the early stages of the fight. If stamina comes into play, he could be found wanting.

Fury and Joshua will go down as two of the greatest fighters in British boxing history and an exhilarating double header is only going to enhance their status with fight fans across the United Kingdom.

Who will come out on top? Only time will tell. Joshua has long been regarded as the golden boy of British boxing but Fury’s knowhow and intellect may get him over the line.