The Best 9 Dart Finishes In The History Of Darts

Hitting a nine dart finish is the aim for every darts player - we look at the best 9 darters in history... 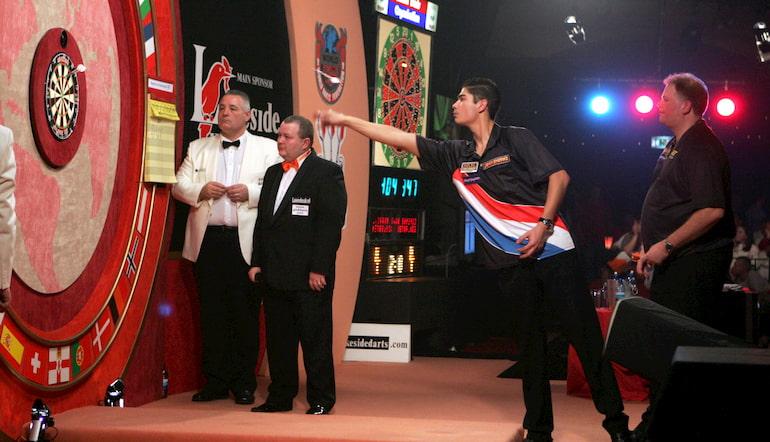 Darts has gone from the traditional pub game to a fully functioning sport in a relatively short space of time – and darts is now watched by millions around the world.

Hitting a nine dart finish is akin to scoring a hat-trick; you are adored by fans in attendance and 9 darter highlight reels can be found splashed across social media.

For darts betting fans, the nine dart finish is a popular pick – whether that is for a player to hit the perfect leg in a set, match or game.

The sport has evolved somewhat since John Lowe notched the first televised nine darter in 1984, with fans almost expecting a perfect leg every time one of the top players opens with a 180.

Here, we look at some of the best 9 dart finishes in the sport. From the top TV nine darters to darts prize money for the perfect 9 darter, we’ve got you covered here at 888sport.

John Lowe is credited with being the first player to record a 9 dart finish at a televised event, with the Englishman recording a perfect leg at the 1984 World Matchplay.

With as many as 10 perfect legs recorded since the event was formed in 2005, the cream of the crop put on a show in the Premier League.

According to the PDC records, Phil Taylor leads the way with a sensational 11 nine darters – ahead of Michael van Gerwen (7) and both Raymond van Barneveld and Adrian Lewis (5).

‘The Power’ is widely accepted as the greatest darts player of all-time and he certainly sets the standard when it comes to televised performances. He was a popular pick in darts betting tips throughout his exceptional career.

At the time of writing, no female darts player has recorded a televised nine-dart finish. Could ‘Queen of the Palace’ Fallon Sherrock be the first to score a perfect leg in 2021?

Hitting a 9 darter is one of the top achievements for any darts player. Could we see one of the rising darts stars climb onto this list in the near future?

We’ve not seen a nine dart finish at the PDC World Championship since 2016 – though it is still the second most successful event in terms of 9 darters.

Incredibly, Phil ‘The Power’ Taylor failed to hit a nine dart finish in a World Championship match during his illustrious career, despite winning 16 world titles.

Paul Lim became the first player in World Darts Championship history to score the perfect leg back in 1990 – and that was in the BDO rather than the PDC.

Dean Winstanley hit one of the most famous 9 darters at the 2012 World Championship – with unrivalled joy spread across his face as he clinched a cool £7,500 bonus.

Unfortunately, Winstanley went on to lose the match to Vincent van der Voort but those in attendance at the Alexandra Palace will never forget his jubilant 9 darter celebration.

To this day, Raymond van Barneveld and Adrian Lewis are the only players to score two 9 dart finishes at the PDC World Championship.

Both players will go down as darts legends and Barney’s second nine dart finish sent the Ally Pally into raptures – darts fans will always remember the Dutchman’s impact on the biggest stage of all.

How Many Ways Can You Get A 9 Dart Finish?

There are 3944 different ways to hit a nine darter. Incredibly, the most popular final dart for the checkout is the bullseye with 2,296 nine darters ending on that.

Most darts fans will be familiar with nine dart finishes ending on double 12 – that is arguably the ‘go to’ way for the majority of modern dart players.

Again, the vast majority of 9 darters start with a player targeting the treble 20. The reason is simple: this is the highest scoring area on a dart board.

Logic dictates that most players will start on treble 20 with the possibility of opting for treble 19 as another high scoring alternative.

The most common method of attempting a nine dart finish usually involves leaving 141, with three possible 9 darter routes for players:

Like the greatest 147 snooker breaks, the nine dart finish is the ultimate achievement. There may be 3944 unique ways to hit the perfect leg but that does not make it any easier.

You have to be incredibly talented at the oche to hold your nerve and only the best darts players will record a 9 darter.

A total of 339 nine dart finishes have been recorded in PDC history, with modern day players hitting 9 darters for fun.

47 nine darters were thrown in 2019, with 25 perfect legs scored during a disrupted 2020 calendar. Darts fans have witnessed five 9 dart finishes on television this year.

According to PDC darts statistics, just 10 nine dart finishes had been recorded prior to 2006 – a fact that shows the increase in quality of play in recent years.

What Is The Prize Money For A 9 Dart Finish?

The prize money awarded for hitting a nine dart finish varies depending on tournament – though many events are steering clear of a bonus for the perfect leg.

Due to the high standard of play in recent years, the 9 darter is getting more popular. In fact, there were a record 47 successful nine-dart finishes in 2019.

The bonus for recording TWO perfect legs at the 2020 PDC World Darts Championship was £100,000. Unfortunately for darts fans around the world, the bonus went unclaimed.

Nowadays, it is universally accepted that there will not be a nine dart finish bonus for most major darts tournaments. Instead, this sum will be added to darts tournament prize money.

However, there is a nine-dart finish tradition that has been left in place. A player will be inducted into the PDC Nine-Dart Club if they successfully complete the perfect leg.

Michael van Gerwen is one of two players (Phil Taylor being the other) to hit two nine-dart finishes in the same match.

The Dutchman leads the way with an impressive 24 nine dart finishes throughout his career – eclipsing Taylor’s tally of 22 perfect legs.

Adrian Lewis and Dave Chisnall are next up with 12 and 11 nine dart finishes respectively. If anything, this shows the gulf in class between Van Gerwen, Taylor and their rivals.

While the latter has failed to win the PDC World Championship, Lewis is a two-time world champion and he is one of the best darts players of all-time.

It was the first 9 dart finish at the Alexandra Palace for five years - and darts fans around the world can watch it here.