Five of the greatest moments in Premier League Darts history – which is your favourite? 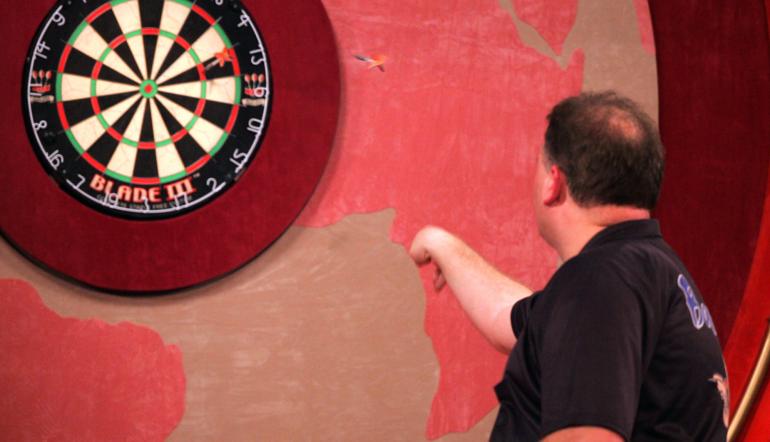 Premier League Darts is back. Thursday night will see the 2020 competition get underway and darts fans from all over the United Kingdom will be tuning in to watch their favourite stars in action.

For now, let’s take a trip down memory lane and look at some of the famous darts moments in Premier League history. Fingers crossed for more famous matches in 2020 – it could be a tournament to remember.

Lewis and Wade have had their fair share of disagreements over the years but this was on another level. Having played in the PDC World Championship less than three months prior to the start of the Premier League, this was always going to be a feisty affair.

With Lewis leading 7-5, Wade raised an unusual complaint with the match referee. The two-time World Grand Prix champion claimed that Lewis was deliberately stamping on a loose floorboard in an attempt to distract him while throwing at the oche.

Wade and Lewis clashed on stage but the latter held on to close out a memorable Premier League Darts success.

Having reached the 2014 World Championship final, Wright was relatively new to the big stage and he was determined to make an impact on the Premier League. Adopting his usual showman tactics, his attempt to wind Van Gerwen up was clear from the start.

There was a wry smile from Van Gerwen, one of the best ever darts players, and it would be the Dutchman who had the last laugh as he claimed a 7-5 victory in Dublin. However, the bad blood between these players is still clear for all to see.

Wright stated afterwards that he didn’t care about Van Gerwen disapproving of his tactics and that he would avenge that defeat in their next encounter.

Van Gerwen averaged 123.40 against Smith in the 2016 Premier League campaign – to this day it remains the best average in the competition’s history. In fact, 123.40 is the highest ever darts average recorded at a televised event.

Had the Dutchman hit double 18 in the seventh leg, he would have clinched a 7-0 victory while averaging more than 133. Instead, Smith claimed a consolation leg before Van Gerwen finally put an end to his misery in the eighth leg of the match.

Van Gerwen’s exploits that night eclipsed every performance we’ve ever seen in the Premier League. The Dutchman will be a popular pick in darts betting markets for 2020.

Trailing 7-2 after nine legs, it looked like the writing was on the wall for Van Gerwen. Wright had the Dutchman exactly where he wanted him and it looked like the Scottish player was about to claim his first Premier League Darts title.

However, Van Gerwen had other ideas. The Dutchman started to reduce the deficit and was within one leg of Wright – the Scot then missed six match darts and the momentum was well and truly with Van Gerwen.

From there, Van Gerwen looked destined for victory. As Wright collapsed, the Dutchman got stronger and a 12-dart finish in the final leg was enough to record a famous comeback.

Van Barneveld defeated Simon Whitlock in his first Premier League outing at Rotterdam but it was his victory in the ‘Dutch Derby’ with Van Gerwen that really sticks in the memory. To this day, it remains an iconic Premier League Darts moment.

Even against his compatriot, the five-time world champion had the backing of the crowd and Van Barneveld duly obliged with a near-perfect performance to down his rival. Barney himself admitted that this result was a career highlight.

Now retired, we won’t be seeing Van Barneveld in action during the 2020 Premier League Darts campaign. However, we’re sure he will be taking a keen interest in darts tips during the tournament.