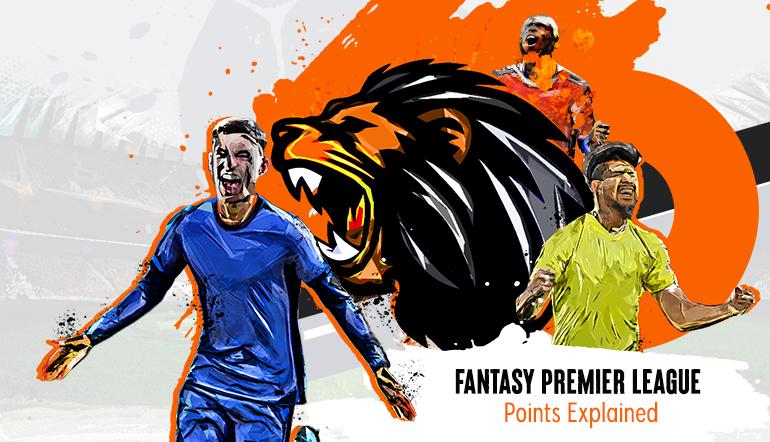 How well your fantasy football team performs is determined by a squad of 15 real-life Premier League players you have selected within a set budget of £100m.

Every Gameweek their actions on the pitch either earns your team points or sees points deducted and this tally directly affects the position of your team in whichever league it is competing in.

In short, once you have picked your strongest starting XI, chosen your captain, and prioritized your bench, your fate then lies entirely in their hands.

If acknowledging the above illustrates just how crucial it is to select the most productive players, it is just as important to understand how fantasy Premier League points are apportioned.

EPL fantasy league points are given out for positive actions such as scoring a goal or keeping a clean sheet and these achievements are broken down further according to the player’s position.

For example, a forward who gets on the score-sheet receives 4 points. A defender, 6.

Assists are also rewarded, with 3 points allocated for a player who directly sets up a goal-scorer.

At the back meanwhile, a clean sheet earns a defender or goalkeeper a very welcomed 4 points. A midfielder whose team does not concede gets a single point.

A point is given for every three shots a keeper stops while saving a penalty sees 5 bumper points awarded.

However, while the fantasy Premier League points scoring system rewards it can also punish.

Two points are deducted for a penalty miss. A costly 4 points are taken off should a player get a red card. For every two goals conceded, a keeper or defender playing for that team is penalized a point.

A detailed list of these actions and points can be located on the official Premier League website. 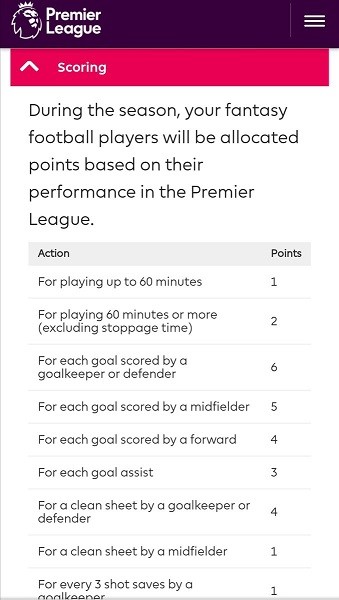 The fantasy Premier League points system doesn’t solely allocate points for individual feats or failings. Each player gains a point for playing up to 60 minutes and that is doubled if their game-time exceeds an hour.

It pays therefore to be vigilant on a weekly basis, ensuring your selected players are match-fit and in contention to start for their respective teams.

Another key consideration is who your team captain will be for each of the 38 Gameweeks as skippers receive double the usual number of Premier League fantasy football points.

FPL bonus points are generated from in-game data deriving from Opta that create a performance score for every player.

The purpose of this is to determine which three players from each game were most impactful and it is this trio who qualify for the valuable bonus points.

Three points are awarded to the highest-scoring player, two to the second best and one to the third.

Benefitting from the Bonus Points System (BPS) can be the difference between languishing in mid-table in your mini-league or challenging at the top. It can see your points tally soar.

To identify and reward these game-changers, detailed criteria is used such as pass completion rates, successful dribbles, and crosses from open play. Points are deducted for defenders conceding fouls or for attackers getting caught offside.

These statistics are number-crunched on our behalf with the highest-scoring players usually confirmed an hour after any given game.

Should you be fortunate to have a player in your team who qualifies for bonus points they are automatically added to your week’s tally. 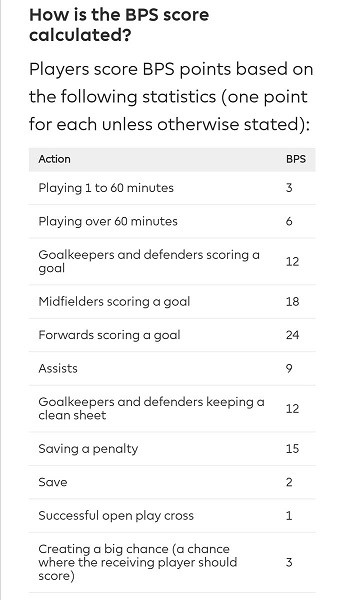 To maximize your Premier League fantasy scoring focus on players who consistently accrue points via their particular attributes.

This does not necessarily mean targeting household names who regularly grab the headlines.

An attacking full-back by way of example, who routinely provides assists while playing for a team that rarely concedes is a priceless asset.

Another way of capitalizing on the fantasy Premier League points scoring system is to sign players who are typically deployed in more advanced positions to the role attributed to them by the game’s organisers.

An attacking midfielder – ergo a midfielder according to FPL – who is used often as a ‘false nine’ can swiftly see your points total rise.

In addition to competing in a private league every participant is entered in the overall league that features ever player from around the globe.

Should you amass the most points in Premier League fantasy football in any given week you will receive an assortment of prizes that includes a goody bag and other items.

There are also monthly prizes while the ultimate winner at the season’s end is lavished with gifts ranging from VIP trips to matches to a desirable watch.

Fantasy Premier League Points For Man Of The Match

A bonus three points are awarded should Opta stats identify one of your picks as a game’s best performing player.

This places even greater value on renowned ‘game-changers’ such as Kevin de Bruyne and Bruno Fernandes.

The Premier League fantasy football player points are totted up at the end of each Gameweek and automatically added – or detracted – from your most recent score, recalibrating your team’s league positions in the process.

Every week can be decisive. Every game too.

The average points total per player, per game of the overall 2019/20 FPL winner was 6.12. Get anywhere close to that and your mini-league rivals will be dots in a rearview mirror.

How Do Fantasy Football Points Work?

Fantasy football points are allocated based on the weekly output of Premier League players you have selected in your team.

A comprehensive points system is in place that rewards various in-game accomplishments and penalizes failings.

How your selections directly fare against these metrics determines how many points your team is given or deducted.

How Do You Get Points In Fantasy Football Premier League?

Points are gained by players executing various actions that include scoring goals, creating an assist, or being part of a defense that keeps a clean sheet.

A negative score arises from own goals, disciplinary issues, or conceding two or more goals in a match.

Points are also awarded for playing up to 60 minutes and beyond.

How To Get The Most Points In Fantasy Football?

An obvious but key consideration is that all eleven of your fantasy football team are regular starters for their respective sides.

From there, identify players who best excel in the criteria on which the fantasy Premier League point scoring system is based.

Previous seasons are an invaluable resource for this, as too are up-to-date stat sites.