Most Wimbledon Titles - Who Has The Most Men's Wimbledon Wins?

The Wimbledon men's winners list is full of famous tennis betting names. Which player has the most Wimbledon titles? 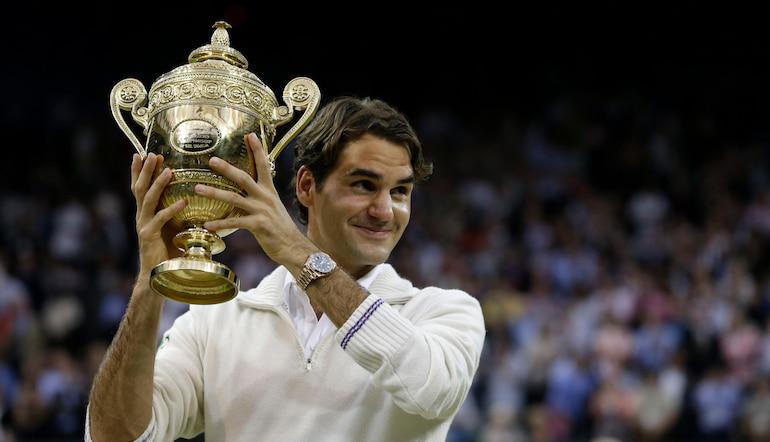 Wimbledon is the premier event on the tennis calendar. Winning at Wimbledon is a highlight of any tennis player’s career, whether accustomed to the status of tennis betting favourite or producing one of the great upsets.

Much like the Ashes or Super Bowl, Wimbledon attracts sports betting attention from people who are not locked into the sport year-round. Success at Wimbledon is the greatest way for a tennis player to make their name.

There have been shocks and epics throughout the men’s Open Era at Wimbledon – our list below has every Wimbledon men’s winner since Rod Laver’s 1968 title.

Roger Federer’s eight titles makes him the most successful Wimbledon men’s player ever.

Martina Navratilova is the only player with more singles titles in the Open era – find out more about the greats of the women’s game in our Wimbledon women’s winners piece.

Though grass courts were long the fortress of players with the fastest tennis serves, Federer became the master of the All England Club without the most powerful serve, but with accuracy, variation and an all-round game unmatched in the history of the sport.

Federer is one of just two players to win five consecutive Wimbledon men’s titles. Starting with a majestic win in 2003, the Swiss maestro beat Andy Roddick in each of the next two finals before wins over Rafael Nadal in 2006 and 2007.

Federer once again faced Nadal in 2008, but the Spaniard was victorious this time round in what is considered by many as the greatest Grand Slam final of all-time.

Roger Federer has reached the #Wimbledon final in:

Pete Sampras was Federer’s predecessor as the King of Wimbledon. The big-serving American won Wimbledon seven times over an eight-year span from 1993 through to 2000. Federer’s win over Sampras in 2001 was a changing of the guard in SW19.

Sampras didn’t hold the record as the most successful man in Wimbledon history for very long. His seven titles is still good for second-most all-time, though Novak Djokovic could well catch him before he calls time on his career.

Djokovic claimed his sixth Wimbledon title in July 2021. The Serbian has lifted the famous trophy on the last two occasions and got the better of Federer in the 2014 and 2015 finals – the first of which was a five-set thriller.

Djokovic’s win over Federer in 2019 was every bit as spectacular, winning the fifth set 13-12.

Borg’s five titles from 1976 through to 1980 have him level with Djokovic for now. The Swede’s period of Wimbledon dominance will take some beating – even Federer could not make it six titles on the bounce.

John McEnroe and Boris Becker are the only other players with more than two Wimbledon titles. McEnroe succeeded Borg, beating the Swedish star in 1981, and making the final in each of the next three seasons.

McEnroe’s rivalry with Jimmy Connors (who beat him in the 1982 final). The McEnroe and Connors rivalry was always a headline at Wimbledon in the early 1980s – Connors finished his career with two Wimbledon titles despite making it to the final on six occasions.

Becker won back-to-back Wimbledons after McEnroe’s run. He then made the final four times in four years between 1988 and 1991, but only lifted the trophy once more. Becker went 1-2 in finals against Stefan Edberg before losing to Michael Stich in 1991.

Six players have won two Wimbledon titles in the Open Era. The most recent player to join that group was Andy Murray – the Brit made history in 2013 and joined Nadal, Edberg, Laver, Connors and Newcombe with his second title in 2016.

While Americans are frequently victorious at the US Open, it had been a long wait for British success at Wimbledon. Prior to Murray’s emotional 2013 triumph, no British man had won the singles since Fred Perry completed his threepeat in 1936.

The Amateur Era ran from 1877 through to 1967. William Renshaw, with seven titles, is the most successful man in the Amateur Era, but it is worth noting that Renshaw won the majority of these titles in a different format.

Only two of his seven Wimbledon wins came in a complete draw. The other five were in the comparatively complicated challenge round format.

Other countries began to enjoy success later in Wimbledon’s Amateur Era, including six successive French champions in the 1920s and an array of American winners. Manuel Santana became the first Spaniard to win at the All England Club in 1966.

For all the markets for Wimbledon - 888sport