Learn what is a wildcard and how to play your wildcard in fantasy Premier League. 2021-2022 updated tips on FPL wildcard and more tips at 888 Sport. 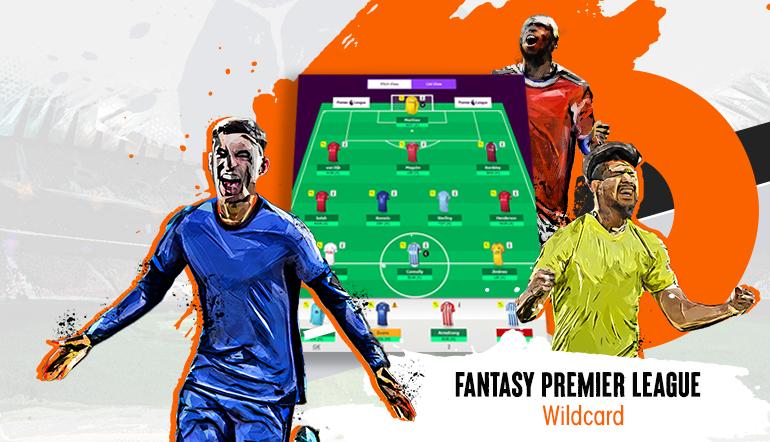 In 2016 the official fantasy Premier League game got a whole lot better.

From an acknowledgement that too many players were dropping out halfway through a season due to becoming disillusioned at their under-performing teams, a series of ‘chips’ were introduced; enhancements that help to maintain interest and keep leagues competitive for the entire duration of a fantasy campaign.

So it was that the ‘triple captain’, ‘bench boost’, and ‘all-out attack’ chips were rolled out, adding a further level of excitement to an already addictive pursuit.

No longer did it feel like the end of the world when your meticulously selected squad disappointed on a weekly basis or became weakened by an injury crisis.

By shrewdly using these new incentives a player’s fortunes could be transformed at a stroke, with scores significantly boosted.

Regrettably, the ‘all-out attack’ chip quickly proved to be an unpopular dud but in its place came the ‘wildcard’, a powerful game-changer that is available to all.

Better yet, while the other chips can only be used once across a season, the magical wildcard option can be utilized twice.

A fantasy football wildcard affords every player with a do-over, or to use a sporting term, a mulligan. It is an opportunity to completely reconfigure your team without punishment of fantasy football points being deducted.

Ordinarily, a player is permitted to make one free transfer per gameweek with a four-point hit incurred for any further switches made.

Here however, by using your wildcard chip, major surgery can be performed without it affecting your points total to date. In need of a defender who isn’t seemingly allergic to clean sheets?

Desperate for a striker who knows where the goal is? Have no fear, because your wildcard is just a click away, a refresh button in all-but-name.

The option affords a player the luxury of making an unlimited number of fantasy Premier League transfers and in this regard, it is identical to the ‘free hit’ chip that is also a feature of the game.

The key difference is that the latter only applies for one week before your squad reverts to its original line-up.

The free hit fantasy football ‘cheat’ is essentially a chance to loan in a new team for a short period of time. Here, the changes are permanent.

This makes the wildcard arguably the most valuable chip of them all, so it is important to use it wisely.

How To Use Wildcard In FPL

To execute the wildcard chip option, it is first necessary to make your transfers and compile your new-look fantasy Premier League team selection.

This will include some thought to your latest FPL Captain Picks, with a team captain accruing you double points.

Once you are happy with your revised squad the option to deploy your wildcard will appear on the transfers page of the official fantasy Premier League site. If this is selected and pressed your bi-seasonal wildcard chip will become active.

If using the app on your phone the ‘Play Wildcard’ appears at the bottom of the screen. If on a desktop the function can be located above your team.

If this is how to use your wildcard, just as crucial is determining when. Simply put, timing is everything.

As stated, wildcards are bi-seasonal with the first deadline typically ending before Gameweek 19. For context, this usually falls between the week of Christmas and New Year.

The second wildcard can be used anytime you like until the season’s conclusion.

A common mistake made by fantasy football beginners is to panic when their initial squad struggles in the opening weeks, and it is admittedly never pleasant to see your well-crafted, perfectly balanced side languish near the bottom of a private league.

The wildcard chip is tempting to use at this early juncture. An opportunity to start over.

The ability to make multiple changes to your squad however is a precious gift, and not one to be squandered. It is far preferable to wait for the optimal time from which you can fully capitalize on the significant benefits the chip offers.

A strategy therefore is needed and some patience too because once you commit, the decision is irreversible.

A double gameweek that has many of your new recruits playing twice across seven days represents the ideal time to refresh your line-up so look out for these.

Conversely, some of the best fantasy football players wait for an international break, to allow them sufficient time to map out the forthcoming fixtures and gauge how they will likely affect their new signings.

When To Use Fantasy Football Wildcard

Fixtures are a key consideration when deploying your wildcard chip as the following example illustrates.

Let’s imagine that three players you wish to sign are bang in form and accumulating points each and every week.

They’re affordable and crucially, each are viable upgrades on the players who are currently letting you down regularly. The switches make sense on every level.

However, these three players happen to play for a club who have two intimidating away trips to top six sides in the days ahead.

Your current under-achievers meanwhile are scheduled to face relegation-doomed outfits who are conceding goals at a rate of knots.
Is now really the right time to ring the changes?

Still, these considerations pale to the biggest one of all. If your team is ravaged by long-term injuries or stuck in a serious rut, then the wildcard chip should be viewed as a best friend to lean on sooner rather than later.

That, after all, is what it is there for.

What is wildcard in fantasy Premier League?

A wildcard chip enables a FPL manager to overhaul their squad with no negative impact to their points tally though of course the original budget of £100m must still be adhered to.

It is a golden opportunity to turn a season around. To learn from mistakes and correct them. This substantial aid is made available twice a season.

How to play your wildcard in fantasy Premier League

Once you have carefully selected better-performing players to your original picks commit to making your transfers.

Then click on the ‘Play Wildcard’ option prominent on the transfers page.