The 10 Most Embarrassing Defeats In Champions League History 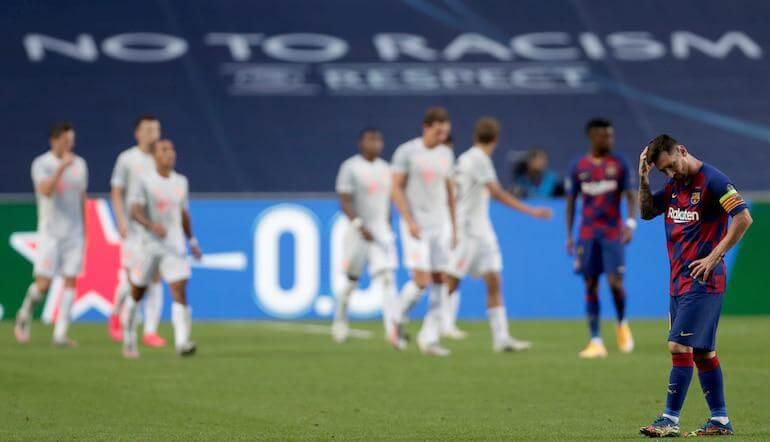 The Champions League is the pinnacle of European football. Millions of football fans around the world tune in to watch the best club teams do battle on the biggest stage of all.

Barcelona’s defeat against Bayern Munich in 2019/20 tops our list of humiliating Champions League losses. It was akin to Germany’s 7-1 triumph over Brazil at the 2014 World Cup.

You’d have got good Champions League betting odds on any of these results. Europe’s elite club competition tends to bring out the best (and sometimes worst) in teams.

Without further ado, it is time to count down the 10 most embarrassing defeats in Champions League history – do you agree with our football rankings?

This may seem a little harsh on Swedish side Malmo but Real’s 8-0 triumph is joint for the highest victory in Champions League history.

Karim Benzema notched a hat-trick but it was Cristiano Ronaldo who stole the show with four goals in the space of 19 breath-taking minutes. It felt like everything Ronaldo touched turned to goals.

Real finished the contest with an astonishing 32 shots on goal – ranking as one of the most dominant Champions League performances. The Santiago Bernabeu crowd certainly went home satisfied that night.

To this day, Real are the most successful club in Champions League history but 8-0 remains their biggest margin of victory and it is unlikely to replicated anytime soon.

Liverpool ran riot against Turkish side Besiktas in this Champions League group stage clash – a margin of victory that ranks as the joint-biggest win in European Cup history.

Punters who bet on football wouldn’t have dreamt of backing an 8-0 success on that night but Liverpool defied the odds to humiliate their lesser opponents.

Yossi Benayoun scored a hat-trick on that night while Ryan Babel and Peter Crouch added braces on what was yet another memorable Anfield Champions League night.

To this day, it is the biggest victory at Anfield in the modern era. The scary thing is: that was a particularly weak Liverpool side – just imagine how many goals the current squad would’ve scored…

Barcelona had one foot in the 2018/19 Champions League final after winning the first leg 3-0 but Liverpool completed one of the great European comebacks.

The Reds took an early lead but failed to build on their fast start. However, a two-minute brace from Georginio Wijnaldum early in the second half turned the tide in their favour.

With 10 minutes to go, Trent Alexander-Arnold took that corner and Divock Origi did the rest to send Liverpool manager Jurgen Klopp into raptures.

The turnaround marked the first time since 1986 that a team that won a semi-final despite losing 3-0 in the first leg. This result will live long in the memory at Anfield.

Less than six months after facing Liverpool in the 2018/19 Champions League final, Spurs suffered one of the biggest defeats in European Cup history.

Incredibly, Tottenham took the lead through Son Heung-Min but Bayern fought back to take a slender lead into half-time. At that stage, nobody expected Bayern to score seven.

Former Arsenal man Serge Gnabry scored four goals in the second half to put Spurs to the sword. The fact that Gnabry was a former Gunner rubbed salt into the wound.

As excellent as Bayern were, Tottenham were woeful. The defeat was the final nail in the coffin for Mauricio Pochettino and it wasn’t long before he was replaced by Jose Mourinho.

Sir Alex Ferguson’s Manchester United were a joy to watch. The dominant force in English football during the 1990s and 2000s, United were popular in Champions League tips.

One of their greatest European nights came in April 2007, with the Red Devils running riot at home to Italian giants AS Roma.

United suffered a narrow defeat in Rome in the first leg but Ferguson’s side sent their Italian opponents home with their tails firmly between their legs after an incredible display.

Cristiano Ronaldo and Michael Carrick were unstoppable that night as United recorded the biggest margin of victory in a Champions League quarter-final.

Despite their unprecedented levels of success in the Champions League, Real Madrid went through a torrid run of form in Europe’s elite competition prior to signing Cristiano Ronaldo.

Having failed to advance past the last-16 stage for six consecutive seasons, Real headed to Anfield with a 1-0 deficit after the first leg at the Santiago Bernabeu.

When Liverpool ruined a prime Real Madrid 4-0 at Anfield in the Champions League. #ThrowbackThursday pic.twitter.com/ppA7okgbPS

However, the La Liga giants found themselves under the cosh early on and Rafa Benitez’s men raced into a two-nil lead on the night.

Real were at sixes and sevens at the back and Liverpool capitalised, adding two more goals in the second half. That 4-0 defeat still haunts Real Madrid supporters to this day.

Paris Saint-Germain were four goals to the good when they travelled to Camp Nou for the second leg of their last-16 Champions League clash in 2016/17.

The task facing Barcelona was almost impossible – even with Lionel Messi, Neymar and Luis Suarez in attack. However, the La Liga giants pulled off one of the best Champions League turnarounds.

There was a real ‘they couldn’t, could they?’ feel in the air as Barcelona took a two-nil lead into the break though Edinson Cavani’s strike turned the tie back in PSG’s favour.

Neymar scored a sensational 88th minute free-kick to give Barcelona hope before the hosts notched two goals in the space of three minutes in injury-time to complete a famous comeback.

Real snatched a 1-0 victory in the first leg at the Bernabeu and football fans were expecting a Champions League classic in the return fixture in Germany.

The Spanish giants took the game by the scruff of the neck, with the visitors scoring three goals in the opening 31 minutes. The Allianz Arena was left stunned after a humiliating first half.

Sergio Ramos and Cristiano Ronaldo notched braces to eliminate the defending champions – this remains one of Bayern Munich’s worst defeats.

In addition, this 4-0 loss ranks as Pep Guardiola’s heaviest defeat in Europe. His Manchester City side will be popular in Champions League predictions going forward.

Despite heading into the final as underdogs, AC Milan thrashed Barcelona in the 1993/94 showpiece. To this day, it is the biggest win in Champions League final history.

Fabio Capello’s side were magnificent from start to finish, racing into a two-nil lead at the break. However, things were about to get even better for Milan in the second half.

It’s 26 years since what Milan fans call The Match of the Century — AC Milan v Barcelona in the 1994 Champions League Final pic.twitter.com/lLQmxjWRRD

Just 12 months after their own embarrassing Champions League defeat to Marseille, Milan had redemption with the club’s first Scudetto and European Cup double.

Barcelona had one of the strongest teams in the world at the time and the Spanish outfit were expected to emerge victorious at the Olympic Stadium in Greece.

Bayern made Barcelona look like a Sunday League side in the 2019/20 Champions League quarter-finals – the Bavarians were at their imperious best from start to finish.

The writing was on the wall early on as Bayern Munich scored four goals in the opening 31 minutes of the game. The tie was over but things were about to get worse for Barcelona.

The icing on the cake for Bayern was Philippe Coutinho’s brace. Still technically a Barcelona player, the Brazilian was directly involved in three goals after coming on as a substitute.

There was nothing flattering about this result – Bayern were well worth their 8-2 triumph. Easily the most humiliating defeat in Champions League history, it may take some time for Barcelona to recover.