How Should Gareth Southgate Use England's Right-Backs At Euro 2020?

Gareth Southgate has a decision to make - what will he do with England's talented group of right-backs? 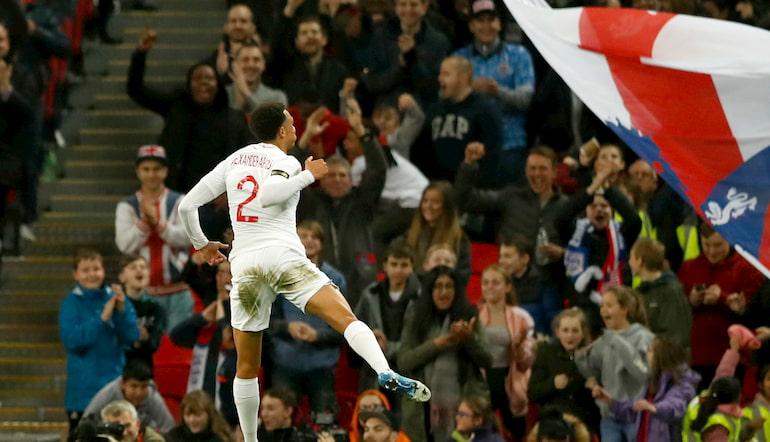 Full-backs on the best teams are attack-first, defend-later players. A position that was once filled with rejected centre-backs is a home for former wide-midfielders and wingers.

As Southgate selects his England squad for Euro 2020, it is right-back where he has the greatest depth. England’s right-back options are the best in the world with four or five legitimate international quality players, possessing a range of different qualities.

James, Alexander-Arnold, Kyle Walker, Kieran Trippier and Aaron Wan-Bissaka could all be first choice in a different era. Max Aarons is playing his way into that group.

This is where Southgate encounters a dilemma. There is such talent at right-back that it gives England options, but it raises questions too; would it be a waste to leave two or three of the five out of the squad? How can they be used best?

One of the options involves a step backwards, and a change of shape from the 4-3-3 that Southgate has favoured in a strong qualification campaign.

This can be considered the moderate tactical change. Southgate did this at the World Cup two summers ago, opting for a back three with Walker as the right-centre-back and using Trippier at wing-back.

Alexander-Arnold would be the wing-back in this scenario, lifting some of the defensive burden which is clearly the weakest area of his game.

Wan-Bissaka is the best candidate for the Walker spot. The Manchester City man is a longshot to make the Euros squad, having been omitted from three successive England squads.

There’s no room for James or Trippier in this team, and neither come close to rivalling Alexander-Arnold as an attacking force down the right flank.

If Southgate rolled with this into the tournament proper, the assumption would be that James or Trippier are taken as cover and they name enough centre-backs to replace Wan-Bissaka if necessary.

Another tweak on the back three option involves a bolder move from Southgate.

Moving the best right-back in the world to a not-right-back position seems a strange suggestion.

Put your best players in their best positions and build around them is usually a good starting point for any manager. The collection of right-backs at Gareth Southgate’s disposal could, perhaps should, make him test that conventional wisdom.

England have a dearth of midfield options. Dele Alli, James Maddison, Jack Grealish, Alex Oxlade-Chamberlain and Mason Mount are all in contention for an advanced spot, but the deep-lying position is England’s weakest.

Jordan Henderson is a certain starter if fit, but Harry Winks and Declan Rice are uninspiring selections at this juncture.

Given Alexander-Arnold’s distribution, his passing would be invaluable in the centre of the park, as Jamie Carragher has previously suggested for Liverpool.

Alexander-Arnold and Henderson as the central midfield pairing in a 3-4-3 would allow Southgate to use James as the wing-back and potentially Wan-Bissaka as a third centre-back.

It is the most extreme fit-all-the-right-backs-in option, and the least likely since Southgate has not experimented with anything close to this yet and England only have four matches before the group stage starts.

A compromise with Alexander-Arnold and Henderson in a 4-3-3 could be considered, too. With so many very-winnable games in the group, it would have been good to see Southgate try Alexander-Arnold in central midfield.

While the replacements at right-back are weaker, it might just be worth it for the upgrade at England’s clear weak spot.

Alexander-Arnold looked up to Steven Gerrard as a youngster too, “Everything about his game I really admired... I always studied him and wanted to be like him.”

There’s no guarantee he would be Gerrard reincarnate, but he has all the tools to translate into central midfield, even if only on a temporary basis as England look to build on their semi-final run at the World Cup.

Vision for passes few others see, the ability to execute them from both feet and a decent tackler (he’s at 1.6 per game in the Premier League this season, a solid return considering how much possession Liverpool have), Liverpool’s right-back is better on the ball than Henderson, Winks or Rice, and he reads the game well enough to break up play.

He could be a perfect springboard to launch counter-attacks through Raheem Sterling and Jadon Sancho.

As fans prepare for the summer with the Euro 2020 tournament guide, England’s loyal supporters will have many questions – Harry Kane’s fitness, Jordan Pickford’s status, centre-back options – but Alexander-Arnold will not be one of them.

It is a topic that should be at least discussed, and hopefully trialled, between now and England’s tournament opener against Croatia on 14th June.

With so little time to prepare, the 4-3-3 is set to stay for the Euros with Alexander-Arnold remaining at right-back.

There’s no issue with that, of course, as that shape allows Southgate to use the Sterling-Kane-Sancho front three and possibly fit in two of the advanced midfielders.

Alexander-Arnold in midfield feels like it will be a missed opportunity, however. It might have been a disaster, but it could have delved into England’s greatest strength to address their greatest weakness.

It would leave no room for Alli, Grealish or Maddison without Sancho or Sterling missing out, and that’s an issue.

With injuries possible, England could have benefited from testing different setups in the lead up to the Euros though, and having enjoyed an easy path to qualification, they had ample opportunity to try things.

England are the 5/1 favourites in the latest Euro 2020 odds. They have the best right-back on the planet and Southgate is starting him at right-back.

It’s not exactly a major gripe, but with such a collection of superb talents at right-back, not attempting to use more than one of them in the XI feels like a bit of a waste.