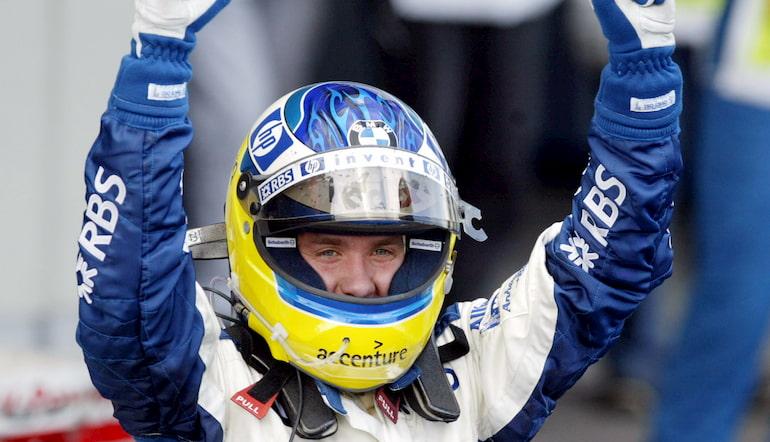 Only the best drivers on the planet make it to Formula One. Once they arrive at the summit of motorsport, drivers need not only skill to become a race winner.

They need good fortune, they need a great car. Opportunities matter, and that is particularly noticeable in recent years.

However good a driver may be, what they can achieve is controlled (to differing degrees) by the team they are in. Lewis Hamilton would not be a six-time world champion without Mercedes.

As such, a lot of wonderful Formula One drivers never win a race. Throughout the history of the sport, there have been top quality drivers aplenty who have never stood atop the podium. Here are some of the best ever F1 drivers to never win a race…

Every Formula One fan knows and loves Martin Brundle the presenter, the commentator, the man who strides up and down the grid on race day.

Brundle has been a huge part of Formula One coverage since his retirement from the sport, but it’s easy to forget what a talented driver he was.

Brundle made his name duelling with Ayrton Senna in Formula Three. It was a spectacular title battle, one which Senna ultimately won, but it showcased Brundle’s ability as he went toe-to-toe with one of the all-time greats.

A solid start to his F1 career in 1984 was put on hold after a massive crash in Dallas saw him break both ankles and feet, finishing his season.

A win at Le Mans in 1990 was obviously a massive moment, and it likely played a part in his 1992 move to Benneton alongside Michael Schumacher.

Brundle kept close to Schumacher, unafraid to race him wheel-to-wheel.

His performances against two drivers with the most Grand Prix wins in Schumacher and Senna showed exactly was capable of, though as Senna got the better of him in F3, a transmission failure in Canada stole a race win from his grasp.

A career of what might have been, Brundle started 158 Grands Prix, accumulating nine podiums and 98 points and raced for eight different teams.

Arriving in Formula One with a record of success at junior levels, Nick Heidfeld earned a testing job at McLaren and was soon promoted to Sauber alongside a young Kimi Raikkonen.

He out-raced the Finn in their 2001 rookie year, but Raikkonen landed the job at McLaren.

Heidfeld continued to drive well for Sauber and then Jordan before joining Williams in 2005. Second place finishes came at Monaco and the Nurburgring before moving back to Sauber.

Heidfeld had a real chance at victory, but instead had to watch teammate Robert Kubica stand atop the podium as the team took a one-two in Canada.

His career waned at the turn of the decade, dropped by Sauber in 2009 before a brief return and a spell at Renault.

Never an F1 betting favourite, Heidfeld had opportunities to win, and could have had a very different career if he took the McLaren seat ahead of Raikkonen.

The holder of the record for the most starts without a podium, one could argue it’s a bit premature to have Nico Hulkenberg on this list.

Despite being let go by Renault and replaced by Esteban Ocon for 2020, Hulkenberg has raced this season, replacing Sergio Perez and impressing in the Racing Point. His F1 career might not be over.

In 178 starts, Hulkenberg had his opportunities at a podium (or maybe even victory), but the aforementioned record is a little unfair.

He has raced in a period of dominant teams, starting with Red Bull and then Mercedes, and the German has rarely been in a car with the pace to take major points let alone win.

A race collapsing into chaos and falling to him has always been his best chance. Competing for Williams, Sauber, Force India (two stints) and Renault, Hulkenberg has been a reliable, strong driver.

His immediate success in Formula 2 showed his pace, and with an opportunity in one of the top three, there’s no doubt he would have been a race winner.

Racing in the 1950s, Jean Behra had the makings of a world champion.

He became a national star in France following a non-championship win in Reims, racing for Gordini in 1952, but the years that followed were marred by reliability issues. Behra grew irritated and departed for Maserati.

Further non-championship wins followed, though his first year with the Italian team (1955) saw them pitted against the unbeatable Mercedes W196, arguably the greatest car in the history of the sport. Maserati had their work cut out to compete that season.

Juan Manuel Fangio and Stirling Moss joined Behra at Maserati in 1956, following the Silver Arrows’ departure from Formula One. Behra naturally dropped down the pecking order, and while he picked up podiums, was seldom competing for the top step.

A short period with Owen Racing followed, before an even shorter stint at Ferrari, which was cut short after the Frenchman punched his team manager.

Behra was tragically killed in a sportscar race in Berlin a few weeks after he left F1. Once tipped for become a world champion, France had to wait until the 1980s to be on top of the Formula One world.

A career remembered for misfortune, Chris Amon didn’t always agree with being considered unlucky (as he lived through Formula One’s most dangerous era), but his life in racing was one of near-misses.

Many consider Amon as one of the most talented drivers to have ever lived, someone up there with icons like Jim Clark.

His effort in winning the 1966 Le Mans race opened the door for a career in F1. It wasn’t any old seat, either. Amon’s drive impressed Enzo Ferrari, and he was in the scarlet red Scuderia the following season.

His first season started with tragedy as his teammate Lorenzo Bandini died, putting Amon as the number one driver. Podium finishes followed, but engine failure in America stole that elusive first race win.

Three years later, his hopes of winning the Italian Grand Prix were hit when he bizarrely ripped off his entire visor rather than a strip. A puncture while leading in France the following season meant another missed opportunity.

Amon’s 11 podiums in 96 race starts is misleading for the talent he possessed. He led over 180 laps across his career, and his raw pace was shown by his five poles. With a bit more luck, he would be regarded among the greatest ever.