Most Grand Prix Wins: Who Has The Most F1 Titles?

Who holds the record for the most Grand Prix wins? Our F1 sports betting expert picks his way through the drivers with the most F1 titles... 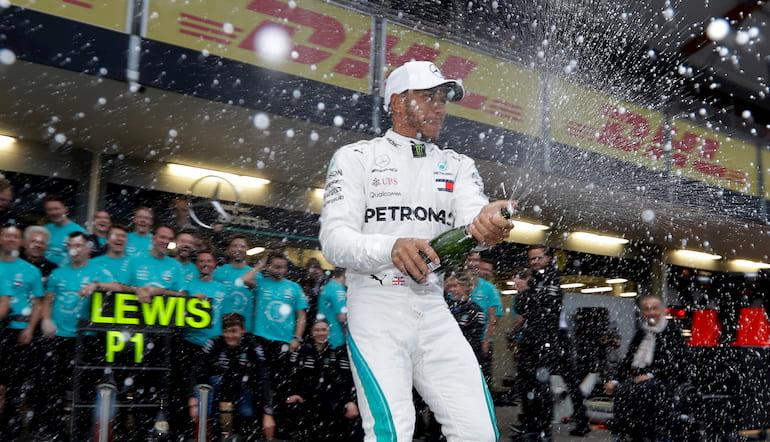 The greatest Formula 1 driver of all-time conversation is open for discussion but most F1 fans will agree that it is a two-horse race between Michael Schumacher and Lewis Hamilton.

Schumacher led the way with the most Formula One Grand Prix wins for some time but Hamilton has now broken his record. F1 betting odds will be in Hamilton’s favour to extend his advantage in the coming years.

The Formula 1 landscape has undergone major changes in the modern era – Schumacher and Hamilton are now some way clear of their peers in terms of most Grand Prix wins. In addition, Lewis Hamilton net worth figures show that the Mercedes man is the richest driver in the sport.

Without further ado, it is time to take a closer look at the most successful drivers in F1. Today’s rising stars will aspire to feature on this list at some point in the future.

With 25 Grand Prix wins to his name, Lauda sneaks into the top 10 alongside Jim Clark. He will be remembered as a true icon of motorsport.

He was crowned world champion on three separate occasions and ranks as one of the best drivers in Formula 1 history.

Modern F1 fans know Lauda from his role as non-executive chairman of Mercedes but his impact on the track will live long in the memory.

With 25 wins from just 73 Grand Prix entries, Clark has one of the best win ratios in Formula One.

Clark won two F1 world titles in 1963 and 1965 and he is the first name to spring to mind when you think of the Lotus Formula One team.

At the time of his tragic death in 1968, Clark had won more Grand Prix races and recorded more pole positions than any of his peers.

Stewart burst onto the scene in 1965, finishing third in the Drivers’ Championship standings in his rookie season. From his debut in South Africa, he looked destined for greatness.

Finishing on the podium in nearly half of his races, Stewart was a pillar of consistency and he is arguably the most talented F1 driver to hail from Scotland.

Stewart had decided to retire prior to the 1973 campaign but went out on a high, clinching an incredible third world title.

It took Mansell almost five years to record his first Grand Prix triumph but it was well worth the wait – his performance at Brands Hatch in 1985 was outstanding.

He consistently ranks amongst the greatest ever F1 drivers in polls around the world and his 1992 World Championship success was very emotional.

Following that success, Mansell went on to claim the CART Indy Car World Series in 1993 and he is one of the only British drivers to complete this double.

Alonso is a household name for F1 fans and the Spaniard was arguably more talented than some of the drivers who are above him on this list.

The two-time world champion had to compete with the likes of Schumacher, Hamilton and Sebastian Vettel during his career so 32 Grand Prix wins is some feat.

Now retired, his legacy was impacted slightly by a disappointing finish to his career. Alonso left the sport in 2018 after recording his 32nd and final Grand Prix win back in 2013.

Senna influenced the sport in so many ways and the Brazilian will go down in history as one of the greatest ever F1 drivers.

With 80 podiums from his 161 Grand Prix starts, Senna’s record speaks for itself – and he even turned 41 of those podium finishes into Formula One victories.

Senna won three world titles during his career before his tragic death in 1994. To this day, it remains one of the worst moments in Formula One history but his legacy will live on forever.

Prost and Senna were involved in one of Formula One’s most shocking moments at Suzuka in 1989 but that incident highlighted just how competitive both men were.

The Frenchman went on to record 51 Grand Prix wins, claiming four world titles in a truly magnificent career. He finished his time in F1 with an impressive 25% win rate.

You don’t find too many drivers who walk away, return to the sport and then win a world title but that is exactly what Prost did when he joined Williams in 1993. What a man.

Vettel was a destructive force in Formula One during his time at Red Bull Racing, winning the world title in four successive years at the beginning of the 2010s.

His most impressive achievement is his record of nine consecutive Grand Prix victories. The Red Bull star was untouchable during the 2013 season, putting together an unprecedented run of Grand Prix triumphs.

While the German has failed to add to his tally of world titles, he has climbed above Prost in terms of Grand Prix wins – therefore cementing his status as an all-time F1 great.

Schumacher leads the way with seven world titles and the Ferrari legend has a special place in the sport. Even if Hamilton breaks his records, Schumacher may be regarded as the best F1 driver of all-time.

He either leads or has led most of Formula One’s top records and he finished his career with an astounding 155 podium finishes.

To this day, Schumacher is still talked about as the best – with Hamilton himself stating that the German is the one they all have to emulate.

Arguably the most naturally gifted driver ever to race in Formula One, Hamilton has been a dominant figure on the racetrack throughout his career.

Hamilton has been involved in some of F1’s greatest rivalries over the years, with titanic clashes with Vettel and Nico Rosberg taking centre of attention in the sport.

With Schumacher's tally of 91 Grand Prix wins now eclipsed, the Brit can focus on matching the German's record of seven world titles.