Lewis Hamilton vs Michael Schumacher: Who Is The Greatest Formula One Driver Of All-Time?

It is the Federer vs Nadal of the Formula One world - but are you Team Hamilton or Team Schumacher? 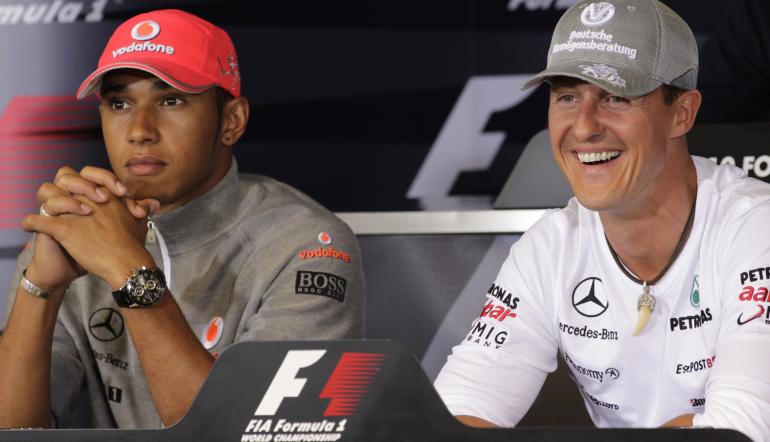 The contest to be considered the greatest F1 driver of all-time crosses generations. There are plenty of drivers who have a solid argument, from Juan Manuel Fangio to Ayrton Senna through to Michael Schumacher and Lewis Hamilton.

Hamilton recently secured his sixth Drivers’ Championship, moving him into lone possession of second on the all-time list, one behind Schumacher.

Formula One in the 21st century has been defined by Schumacher and Hamilton with four years of Red Bull supremacy (and four titles for Sebastian Vettel) in between.

Their career paths are similar, enjoying success in their early years before switching teams and becoming almost unbeatable. As characters and drivers, the German and the Brit are very different, however.

Hamilton’s 88 career pole positions put him miles ahead of anyone else in the history of the sport. Schumacher – unsurprisingly – sits in second, a whopping 20 poles behind the Brit.

Hamilton has delivered many of the greatest qualifying laps in Formula One history, often snatching top spot in the dying seconds of the session. His performances under pressure in Q3 are unmatched.

At the time of writing, Schumacher entered into 58 more qualifying session than Hamilton, but has 20 fewer pole positions.

Some of that can be attributed to the change in qualification format, and Schumacher’s middle-of-the-pack time with Mercedes obviously skews the numbers a little. Hamilton hasn’t always been the F1 betting favourite though and he often defies the odds.

Hamilton didn’t take long to show Formula One his qualifying pace. His six poles in his debut 2007 campaign are the most ever by a rookie as he pushed all the way for the title.

Since the 2018 French Grand Prix, Hamilton has also held the record for most pole positions at different circuits with an incredible 27.

Rivalries with Fernando Alonso and Nico Rosberg have highlighted Hamilton’s competitive streak, but the Brit hasn’t had the same moments of on-track controversy like Schumacher did.

An infamous crash with Damon Hill in 1994 secured Schumacher’s first title. The bizarre decision to park up at Rascasse in 2006 resulted in a penalty. He collided with Villeneuve at Jerez in 1997. He squeezed Barrichello in 2010.

Schumacher’s career was defined by these flashpoints almost as much as his success. His unwavering desire to win at all costs made him a divisive figure at times, and certainly made sure he wasn’t always popular on the grid.

These incidents varied in severity, but for all the bitterness between a young Hamilton and Alonso, and the icy post-race footage of Hamilton and his long-time friend Rosberg, the Brit doesn’t have the same record of cynicism on the track.

That’s not to say Hamilton’s been an angel throughout his career (far from it). He’s a fearsome competitor. Collisions happen, and at times Hamilton has been at fault, but his career has been far cleaner than Schumacher’s in terms of controversy.

The circumstances of their careers have been very different with regulations varying dramatically since Schumacher started off in Formula One in the 1990s.

Tyre management through a race has altered, the removal of re-fuelling has seen strategy change. The cars are hybrids now and DRS has made overtaking a different game.

Both have produced countless historic drives; Hamilton’s win at the 2018 German Grand Prix stands out, as does Schumacher’s second place at the Spanish Grand Prix in 1994. They are likely the two greatest wet race drivers ever, too.

Hamilton and Schumacher immediately showed their pace, shining as rookies. Hamilton outraced world champion Alonso and it didn’t take Schumacher long before he was battling with Hill and Senna. The difference, however, has been the structure of Mercedes and Ferrari.

While both constructors have prioritised winning, Hamilton has had teammates that challenged him. Rosberg won a title, Valtteri Bottas is a genuine contender to win races.

Hamilton has been helped out by teammates at times, but not to the extent that Schumacher was with Rubens Barrichello (Spielberg 2002 comes to mind).

Putting peak Schumacher and peak Hamilton on the same team for a whole season is one of those fantasy scenarios – maybe we could throw Senna in there as well. The sports betting odds may well favour Hamilton at this point.

If Hamilton gets that seventh title, it will be hard to argue for Schumacher as a superior driver.

Senna, Fangio, Alain Prost and Jim Clark will remain challengers for the greatest ever crown, of course.

Hamilton is the complete package, a superb qualifier, masterful racer and consistent winner. It will always be a topic of debate, a topic that’s ultimately subjective, but Hamilton’s case is compelling.

Many will already have Hamilton as the greatest driver ever, the seventh title will guarantee his place ahead of Schumacher.