Our horse racing tips expert looks at the history of Grand National sponsors over the years... 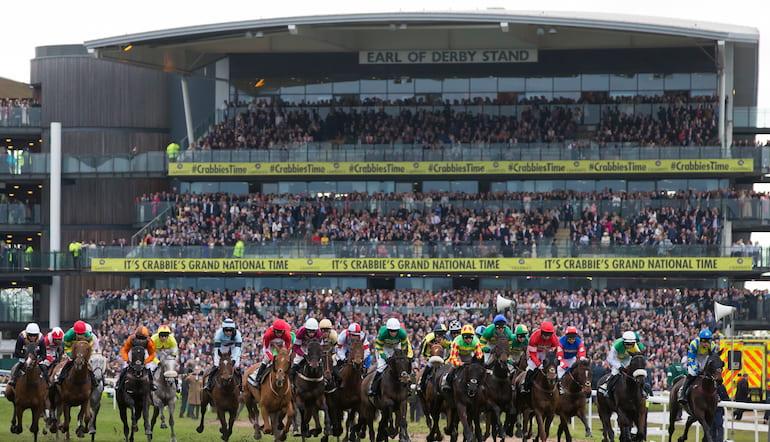 Staging a horse race on the magnitude of the Grand National is always going to be a costly business, but without a lead sponsor it would be nigh on impossible.

Sponsors by their nature come and go over the years, but they are always remembered with fondness because without their financial backing in their associated years, the Grand Nationals we love and reminisce about would never have taken place.

The 1970’s were not very good years at Aintree in terms of finances and the 1975 race, won by NAP of the Day L‘Escargot, saw the lowest attendance figures in many a year.

The following year the legendary Ladbrokes boss – Cyril Stein signed a management contract to run the ailing Grand National meeting for the next seven years and Mike Dillon was chosen to head it up.

Dillon said on his recent retirement in 2020:

"I got dead lucky as you had Red Rum at the time. You didn't need to be a genius to figure that if you could market Red Rum you had a chance of raising the profile of the race.

Ginger McCain didn't know me from a bar of soap but I just explained what I was trying to do and it was preaching to the converted with his love of the National."

The following newspapers and car companies were also Grand National sponsors during the 1970’s and 80’s.

Canadian whiskey distillers Seagram were the sponsors of the Grand National from 1984 to 1991.

Major Ivan Straker, chairman of Seagram UK, was a keen racing enthusiast and he persuaded the distillery board to sponsor the event in order to save Aintree Racecourse from being sold off for housing.

Apparently Straker’s persuasive words to the company at the time were: “Listen, you’ve always wanted to raise the profile of Seagram in the UK and here is the most wonderful, wonderful chance.”

It was rumoured that the Canadian company had offered to buy the horse before the race but their offer was declined.

Essentially the Martell years at Aintree were simply a continuation of the Seagram sponsorship as Martell Cognac, owned at the time by Seagram, took over the naming rights of the race in 1992 in a deal worth £4.5m.

According to the former managing director of Aintree racecourse, Charles Barnett, the Martell sponsorship years totally transformed Grand National betting – bring the attendance figures up from 87,000 in 1992 to 140,000 in 2003.

Surprisingly, although the link between the Martell brand and Aintree was well known, it didn’t actually do a great deal for Martell’s sales at first.

Not until direct action was taken by a UK advertising agency. Eventually, their advertising strategy proved lucrative, with Martell reporting an increase in sales of 17 per cent at the time.

It was is estimated that John Smith’s spent a total of £20 million on sponsorship, related TV advertising and associated merchandising when they first came on board in 2005.

The beer brand owned by Heineken ended its nine year relationship with the Aintree Grand National in 2013.

The race was described as one of the jewels in the worldwide sponsorship calendar, drawing upon a global audience of around 600 million viewers.

Brand manager Karen Crowley said at the time: “Working closely with the Aintree team, we’ve developed a number of innovative concepts which have helped return the race to the hearts and minds of the British public.

"We end our long association in the knowledge we have created a successful and significant sponsorship model that will serve Aintree and its new sponsors well in the future.”

That last running under the John Smith’s banner in 2013 was the first time the Grand National breached the magical £1 million (€1.24 million) marker in prize money.

Many observers believe the main reason for John Smith’s ending their deal with the race in 2013 was due to the negative press following the death of two horses at the 2012 event.

A premature pulling of the plug perhaps because the safety of the race was significantly improved the following year?

The alcoholic ginger beer, owned by Halewood Wines and Spirits, sponsored the Aintree Festival for three years before ending its relationship with the track in 2016.

The Huyton-based drinks manufacturer opted not to renew its sponsorship after CEO Stewart Hainsworth decided it was not getting good value for the investment from the partnership, preferring to go down the rugby sponsorship route instead.

Northern Irish health and clinical research company Randox partnered up with Aintree in 2017 and is still the Grand National’s latest sponsor.

As well as financially backing the main race, Randox Health is also the official healthcare partner of Jockey Club racecourses, which is made up of 15 racecourses across the UK with the three premier tracks being Aintree, Cheltenham and Epsom.

In December 2020, Randox reached an agreement with The Jockey Club for a five-year extension to its sponsorship of the world’s greatest steeplechase.

Speaking at the time of the extended sponsorship announcement, NW regional director of Jockey Club racecourses said: “At a time when we are facing massive challenges in British racing, it is a tremendous boost to The Jockey Club, and a huge endorsement to the Grand National itself, that a new multi-year deal has been agreed with Randox.”