One of the top youngsters in football, the subject of Erling Haaland net worth is intriguing. How much is Haaland worth compared to his peers? 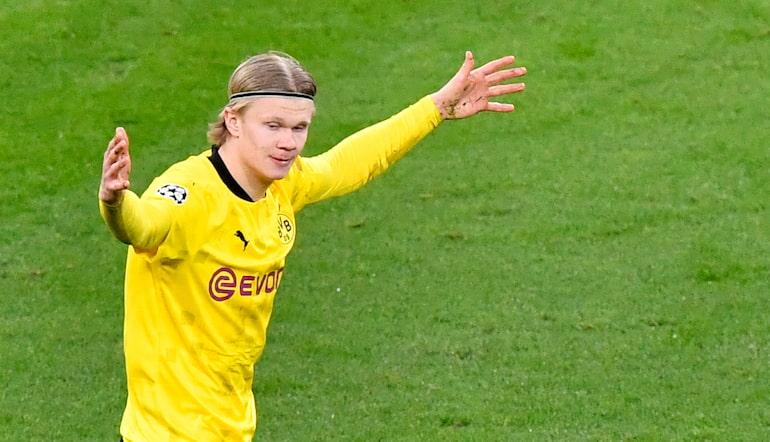 Erling Haaland’s ascension has been dramatic. Not so long ago, Haaland was on the periphery of football betting with RB Salzburg. Still in the early years of his career, he’s already one of the best players in the world.

Ballon d’Or betting odds put Haaland among the top talents in world football. This isn’t a player making his name or battling for recognition.

Haaland has arrived on the world stage – he makes Borussia Dortmund a Champions League contender, and he leads a thrilling generation of gifted Norwegians.

How Much Is Erling Haaland Worth?

Having only spent a couple of years at the pinnacle of the game, his net worth is not quite at the heights of his more experienced peers.

With his statistics soaring, and many of Europe’s wealthiest clubs pursuing his signature, though, it’s a matter of time until Haaland is receiving one of the biggest salaries in sport.

Not many players strike fear into defences quite like Erling Haaland. Every step in his career will be followed closely, and he’s got the ability to change the fortune of any club. Here’s everything you need to know about the Dortmund star.

Estimations of Erling Haaland’s net worth vary, but most come in around the $12 million mark.

Salary Sport claims Haaland receives £141,000 from Dortmund in salary per week. This will, of course, be supplemented by various bonuses and sponsorship deals.

While he’s hardly going to be searching down the back of the sofa for a few pennies, this is a relatively low salary for a player of his calibre.

Haaland’s current contract is considerably below market value – he’s destined for a massive pay rise if he leaves Borussia Dortmund.

Known across the world, Haaland is very marketable. He has been associated with Nike throughout his professional career, but there’s been some speculation he could switch to Puma.

Whoever provides his boots, it’s sure to boost that net worth even further.

Erling Haaland has 21 Bundesliga goals and 10 Champions League goals as of 25th March 2021. Haaland is among the top strikers in the world, and his goal returns in 2020/21 demonstrate exactly why.

Only Robert Lewandowski has scored more Bundesliga goals this term. No other Champions League player has found the net more than six times.

After scoring 29 goals in 27 appearances for Salzburg, Haaland has continued his astonishing goal scoring form in Germany.

Manchester City are one of the richest clubs in the world. They are on the lookout for a striker. Erling Haaland’s father played for the club just after the turn of the century. Links between Haaland and City are inevitable.

Pep Guardiola’s team are searching for a long-term successor to the ageing Sergio Aguero, and with Gabriel Jesus yet to make the position his own, City will have their eyes fixed on Haaland.

Haaland transfer rumours will be relentless in the coming months. Manchester City will be at the centre of it.

Erling Haaland’s dad is Alf-Inge Håland. Alf-Inge recorded 34 caps for Norway between 1994 and 2001, and featured in English football for Leeds United, Nottingham Forest and Manchester City.

The elder Haaland is best known for his long-running rivalry with Roy Keane. The pair often matched up, and tempers frequently flared.

Keane injuring his ACL was the first incident between the two, as Alf-Inge Håland stood over the Manchester United midfielder criticising him, having not realised the seriousness of the injury.

Several years later, Keane made a vicious tackle on Alf-Inge Håland when the two clashed in a Manchester derby. Keane kicked Alf-Inge Håland high on the right knee. The Irish midfielder was immediately sent off and suffered a three-match ban and £5,000 fine.

A year later, Keane released an autobiography, stating this was a pre-meditated retaliation for the incident several seasons earlier.

When the FA began an inquiry, Keane claimed this was poor wording from his ghost writer, but he received further punishment.

Alf-Inge Håland was already struggling with knee issues. The following summer, he underwent surgery on the knee and retired after the next season having made just a handful of substitute appearances.

He once said, "I really dislike (Manchester) United and I can't stand their players.” This has become an often-mentioned quote when discussing Erling Haaland’s next team.

A popular fantasy Champions League pick, Erling Haaland is a star of FIFA 21, too.

His base card in FIFA 21 is rated at 84. That’s not exactly spectacular, but the Norwegian has an array of upgraded cards. There are a pair of 90-rated cards and various other editions between there and the base gold.

Haaland’s combination of pace, control, finishing, strength and size makes him the complete striker in real life. He’s every bit as domineering in FIFA 21.

A quick glance at Erling Haaland’s stats shows he will be at the forefront of Champions League predictions for the next decade or more.

Whichever stats site you prefer, Haaland’s numbers will leap off the page. He’s already breaking Champions League goal scoring records for his age, and it seems to be a rare occasion when he plays 90 minutes without finding the net.

His 3.2 shots per game this season ranks 16th among all players in Europe’s top five leagues. His Dortmund teammate Jadon Sancho is seventh in key passes per match, many of which will have been setting up Haaland.

Of players to have played 900 or more minutes, just Lewandowski, Zlatan Ibrahimovic and Luis Muriel are scoring more goals per 90 minutes.

Haaland is a generational talent. Whether preferring stats or eye test, there’s no question he’s a phenomenal talent, set to dominate the European game for years to come.