Who is the highest paid WNBA player in the league? Our expert looks at the 10 biggest earners in women's basketball... 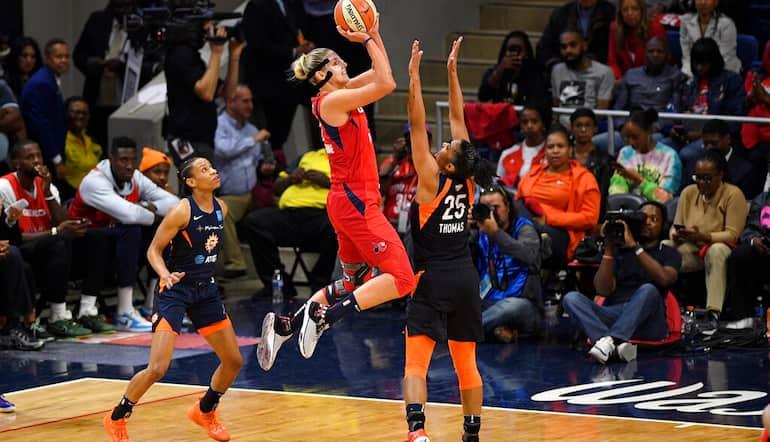 Looking at WNBA salaries can be surprising even if you’re a seasoned follower of basketball odds.

Where NBA contracts are heading towards the $50 million per year range for the league’s biggest stars and first-round picks are immediately millionaires, the supermax in the WNBA is just $221,450.

The majority of the league are on under $100,000 per season despite being in by far the most popular women’s basketball league on the planet.

The WNBA is going from strength to strength with its biggest names becoming increasingly famous. Timing is in the league’s favour too, with the WNBA playoffs taking place in a relative lull in the sports betting calendar.

There are some high-profile players who miss out on the list of the highest paid players in the NBA, including Breanna Stewart and Candace Parker, two recent Finals MVPs.

Selected third overall in the 2011 draft by the Chicago Sky, Courtney Vandersloot is a three-time All-Star. The 5’8 guard penned a multi-year contract in February 2020, which guaranteed $200,000 for the 2021 WNBA campaign.

Vandersloot ran the point as the Sky won their first title in 2021. She’s one of the league’s best playmakers, holding records for the most assists in a season and the highest career assist-per-game tally.

Named to All-WNBA five times and starring at Gonzaga, Vandersloot has been elite throughout her career. There’s no sign of those standards dropping any time soon.

Playing for the New York Liberty in 2021, Betnijah Laney is on her fifth team in just her sixth season in the WNBA.

The breakout season in 2020 with the Atlanta Dream led to a multi-year, high-value pact with the Liberty, and Laney lived up to the deal with 16.8 points and 5.2 assists per contest.

New York fell to Phoenix in the playoffs, who have three of the highest-paid players in the league.

Laney and the Liberty will be back at the forefront of basketball tips today in 2022, however, and the New York fan base will hope Laney can take another leap towards 20 points per game.

Drafted fifth overall by the Fever back in 2014, Natasha Howard has been traded three times on her way to a big-money contract.

The Fever flipped Howard to the Lynx in 2016, and then Minnesota moved Howard on to the Storm two years later. Seattle acquired three draft assets for the forward in 2021.

The Liberty acquired Howard before the 2021 campaign, but temporarily suspended her contract when she missed time as she was playing overseas.

With just one All-Star appearance on her CV, the former Florida State star has a lot to prove in 2022.

Still lighting up the league in her forties, Sue Bird is unquestionably one of the greatest WNBA players of all-time. Bird has four WNBA titles, five Olympic golds, two NCAA titles and eight All-WNBA selections.

Despite an income that compares with an NBA referee salary, Bird is thought to have a net worth in the region of $8 million.

The Seattle Storm guard has been a driving force the WNBA’s growth throughout her career.

Since going second overall to the Tulsa Shock in 2011, Liz Cambage has played basketball all over the world.

An All-Star in all but one of her WNBA campaigns, Cambage holds the all-time record for points in a game and led the league in scoring in 2018.

The Las Vegas Aces topped the West in 2021 and went all the way to the semi-finals. Cambage played a major role in the campaign, grabbing 8.2 boards, scoring 14.2 points per game and shooting over 54% from the field.

Diana Taurasi was drafted first overall by the Phoenix Mercury in 2004.

The 6’0 guard has played every season in Arizona since, winning the regular season MVP in 2009 and three WNBA titles with two Finals MVPs for good measure.

Taurasi has been clutch throughout her career in the WNBA, coming up big in the most important moments for the Mercury. Her 2006 campaign of 25.3 points per game is the best scoring season of all-time.

Another first overall pick for Phoenix, Brittney Griner towers over most other players in ‘the W’ at 6’9.

It’s no surprise Griner has led the league in blocks on eight occasions and earned All-Defensive honours in seven seasons.

The 2.9 blocks per game for her career is a league record. Griner has also enjoyed three seasons of over 20 points per contest, and been dominant in the second half of the 2010s.

Already getting national recognition at high school, Skylar Diggins-Smith lit up college basketball at Notre Dame before going third in the 2013 WNBA draft to the Tulsa Shock.

Diggins-Smith joined the Phoenix Mercury in 2020, however, following four All-Star campaigns with Tulsa and Dallas.

Still only 31, there are plenty more stories to be told in Diggins-Smith’s career. She’s a name to watch out for in basketball betting tips next season.

Traded by the Mercury for three first round picks in 2020, DeWanna Bonner won a couple of titles in Arizona, but now plies her trade with the Connecticut Sun.

Bonner has scattered in four All-Star selections across a decade-plus in the WNBA. There are a couple of All-WNBA honours in there, too.

Winner of two MVPs, the first female player to make the 50-40-90 club, and with five All-WNBA honours, Elena Delle Donne was voted to the league’s top 25 players of its first 25 seasons.

The Chicago Sky traded the former Delaware wing in 2017. Washington were the beneficiaries as Delle Donne led the Mystics to their first title in 2019.

Injuries have troubled Delle Donne at points in her career, but when healthy, there’s no question she’s in the top five players in the league.

Basketball Tips
About the Author
By
Sam Cox