Highest Scoring Super Bowl: Most Points in a Super Bowl

What is the highest scoring Super Bowl in NFL history? We look at the games with the most points in a Super Bowl over the years... 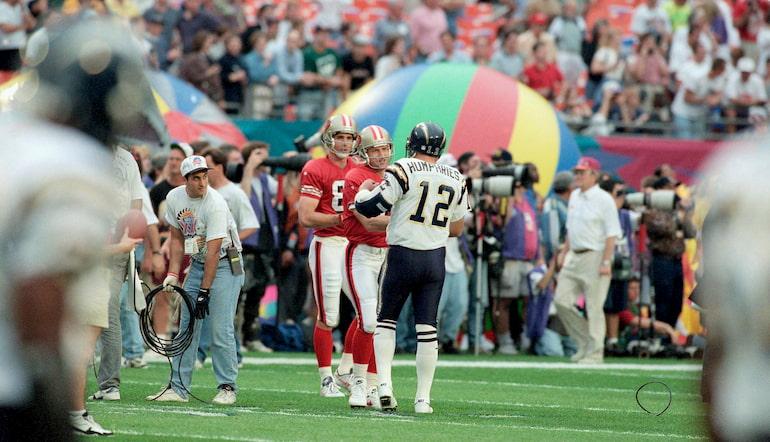 Football fans near and far, gather around! Today we’re going to tackle the highest scoring Super Bowl games in the history of the NFL.

There are some surprise inclusions in this top 10 listing, and we’re confident you’re going to enjoy a little bit of NFL nostalgia as we travel through time in search of awesome Super Bowl results.

With the Super Bowl drawing closer, you can whet your appetite by looking through the best Super Bowls in NFL history here at 888sport.

Fancy a crack at Super Bowl betting? Check out our Super Bowl odds and make your play today!

Super Bowl XXXVIII was played on 1 February 2004 between the Carolina Panthers (14-6) and the New England Patriots (17-2), at Reliant Stadium, in Houston Texas.

The Panthers under coach John Fox tore into the New England Patriots under coach Bill Belichick in front of a capacity crowd of 71,525 roaring fans.

The fourth quarter was filled with action as the Patriots piled on 18 points and the Panthers responded with 19 points. By the final whistle, the score was 32-29 to the New England Patriots.

This Super Bowl spectacular started off slow, with no points on the board going into the second quarter.

The Buffalo Bills struggled until the second half. In the third quarter they scored 10 points, and finished off with 14 points in the fourth quarter. The final score: Washington Redskins 37-24 Buffalo Bills.

Super Bowl LI took place on 5 February 2017, between the Atlanta Falcons (11-5) and the New England Patriots (14-2). As is common in so many Super Bowls, the first quarter was tied at 0-0 - much to the delight of NFL betting fans.

But that's when the Atlanta Falcons kicked into high gear, scoring 21 points in the second quarter compared to just 3 for the New England Patriots.

Super Bowl XLVII got pretty close to the highest-scoring Super Bowl of all time, but it's still several points shy. This matchup between the 49ers and the Ravens did not disappoint.

The Baltimore Ravens (10-6) took on the powerful San Francisco 49ers (11-4-1) at Super Bowl XLVII. This matchup was interrupted by a massive power outage, which through the stadium into darkness for 30 minutes.

The Ravens scored consistently throughout, adding 14 points in the second quarter to boost their total to 34 points by the game's conclusion.

The 49ers started slow, with 3 points scored in both the first and second quarters, followed by a whopping 17 points in the third quarter, and 8 points in the final quarter. That wasn't enough for the 49ers.

Super Bowl XXIV was a pretty lopsided affair. The match played at the Louisiana Superdome, in New Orleans, Louisiana. The San Francisco 49ers (14-2) took on the Denver Broncos (11-5) in a dramatic one-sided matchup.

The 49ers came out all guns blazing, scoring 13 points in the first quarter, followed by 14 points in each of the remaining quarters.

By the conclusion of the Super Bowl, the San Francisco 49ers scored 55 points vs just 10 points by the Denver Broncos. Talk about bringing their ‘A Game’ to the Super Bowl!

The Dallas Cowboys have been known to produce spectacular teams over the years. On 21 January 1979, they almost brought home the bacon.

The game kicked off at the Orange Bowl, in Miami, Florida. The Steelers were the favorite team heading into the matchup, and they didn't disappoint as Pittsburgh lived up to the pre-game hype from NFL expert picks.

The Raiders were completely outplayed by the Tampa Bay Buccaneers, scoring less than half the points put on the board by TBB.

The Buccaneers completely dominated the second, third, and fourth quarters of the game. During the third quarter, the Bucs were up 34-3, and it looked like a complete blowout for the Oakland Raiders.

Then the Raiders restored some pride by piling on 12 points in the fourth quarter, but it was all for naught. The result: Tampa Bay Buccaneers 48-21 Oakland Raiders.

The game started off in explosive fashion, with the Bills scoring 7 points in the first quarter and the Cowboys scoring 14 points.

The momentum was clearly with the Cowboys throughout the match, as they piled on plenty of points in the second quarter, and the final quarter to finish on 52 points.

Now, we are entering another league of Super Bowl scoring. On 4 February, 2018, the Super Bowl game between the New England Patriots and the Philadelphia Eagles was a high-scoring affair.

The Eagles and the Patriots didn't disappoint as they piled on an incredible 74 points between them.

Ultimately, Philadelphia prevailed with a score of 41-33. This Super Bowl match between the Philadelphia Eagles (13-3), and the New England Patriots (13-3) kicked off at the US Bank Stadium, in Minneapolis, Minnesota.

Although 8 points separated the Eagles from the Patriots, it was really a close match throughout. Jay Ajayi, one of the best British NFL players, was key for Philly throughout.

The San Diego Chargers squared off against the San Francisco 49ers in a spectacular Super Bowl matchup. The game kicked off on 29 January 1995, and the most TDs in NFL history were scored at this Super Bowl – 10 in total.

Steve Young’s bullet arm was responsible for 6 of those TDs, and he became a recordholder for that achievement.

By half-time, the 49ers were up 18 points over the Chargers, and by the final whistle, the 49ers led 49:26 to clinch superstardom in the highest scoring Super Bowl ever!