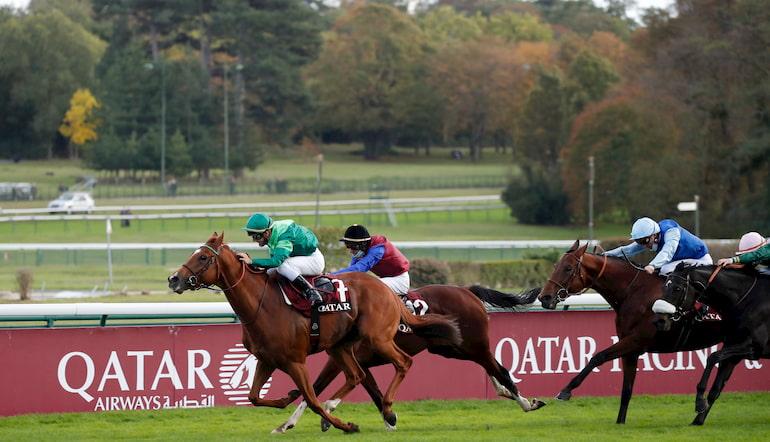 As the curtain comes down on another Flat season now is a good time as any to just take stock of all the horses we will all be excited to see again next season. Some of these will run in the biggest 2021 horse racing fixtures.

Copious amounts of runners will rapidly be going into people’s trackers if they aren’t already in there.

Of course that list is pretty much endless, but here at 888sport we have narrowed those horses to follow down to a very manageable ten.

Hopefully the ten we mention here will go on to bigger and better things in 2021.

The fairer sex have quite a record in the Prix de l'Arc de Triomphe in recent years and there is every chance that Wonderful Tonight could emulate the likes of Treve, Found and Enable by taking the race next October.

Two weeks ago, David Menusier’s three-year-old tasted her first Group One success in the Prix de Royallieu at ParisLongchamp.

Yesterday, on Champions Day at Ascot, she proved that victory was no flash in the pan by gaining her second Group One in the Champions Fillies & Mares Stakes.

Expect Menusier to work backwards from the Arc with Wonderful Tonight in 2021.

The Dewhurst Stakes is traditionally seen as the juvenile championship and the Aidan O’Brien-trained St Mark’s Basilica looks every inch a champion of the future.

Third in the Curragh’s National Stakes, the two-year-old shuffled around the finishing positions in the Dewhurst with Thunder Moon, with Wembley remaining sandwiched between the pair.

In fairness, all three colts want watching in 2021, but St Mark’s Basilica looks to have just that little extra.

St Leger runner-up Berkshire Rocco got his due rewards towards the end of the 2020 season by taking the Noel Murless Stakes at Ascot.

The consistent Sir Percy-colt has never finished out of the first four places in any of his nine starts to date and he looks like being a force to be reckoned with again as a four-year-old.

Andrew Balding intends to drop him back in trip to start with next season, so we may well see him in a race like the Hardwicke Stakes.

The three-year-old was an absolute revelation in 2020, and to finish second in the Arc on what was just his fifth run of his career is ever more the reason to watch his monumental progress next season.

Francis Graffard can look forward to an exciting campaign with In Swoop with the Arc presumably being his number one target.

The USA, South Africa, Australia and Germany have all had horses named Indigo Girl but none have been anywhere near the calibre of the current UK version who has every chance of scooping both the 1000 Guineas and the Oaks next season.

Currently trading around the 14/1 mark in the online betting for both events, one of the John Gosden horses in training for 2021 will be looking to fill the void filled by Enable as she progresses into her three-year-old career next season.

This year’s May Hill winner was just touched off by Pretty Gorgeous in the Fillies’ Mile at Newmarket and the pair of them both have to be on next year’s radar.

Any young horse that the Godolphin stud send to Charlie Appleby to train is generally held in high regard, and we could potentially see fireworks next season from One Ruler has he matures into a three-year-old.

The promising Dubawi-colt had a decent opening season, progressing nicely from seven furlongs to a mile and ending this term with victory in the Autumn Stakes.

Like Best Solution, Ghaiyyath and Persian King before him, all have used the Autumn Stakes as a springboard for subsequent Group One victories and there is every reason to believe One Ruler can follow in their hoof prints.

Speaking after the win Appleby said: “William (Buick) feels that the horse has enough pace to be a Guineas contender.

"His dam Fintry was a G2 winner over a mile and he is a son of Dubawi who will get stronger over the winter, which could build on his speed. I think he is a horse who we would have to consider strongly for the 2000 Guineas."

One Ruler is definitely one of the top Godolphin horses to follow 2021, particularly if the Appleby stable hits a rich vein of form.

The visually impressive High Definition heads into the winter as next year’s Derby favourite, having followed up his maiden win at the Curragh with another success back at the same venue in the Beresford Stakes.

Aidan O’Brien said of his plans for him: “The plan is to bring him back and train him for the Classics next year. We’re very happy with the way he has come out of his last race and that’s the way we are looking with him next year.”

High Definition is an 8/1 chance with us in the horse racing betting for next year’s Derby.

Dermot Weld’s Prix Vermeille and l'Opera winner Tarnawa has been simply sensational this season and should she take in victory or not at the Breeders' Cup, she has to be on any list to follow next year.

The Sharmadal-filly is yet another we may see at ParisLongchamp next October.

Cheveley Park Stakes winners always have to go down in the notebook as horses to follow the year after and Alcohol Free is no different on that score.

The resolute filly stuck her neck out in a tight finish to the race at Newmarket and will almost certainly kick off next season in the 1000 Guineas.

Graffard’s Wooded is certainly well worth following again next year because he may just become one of the most dominant sprinters in Europe.

After taking the Prix de l’Abbaye on just his second run over five furlongs, Graffard is confident a four-year-old Wooded will be a force to be reckoned with in the sprint divisions.

We may well see the ground versatile son of Wootton Bassett at Royal Ascot next year. He was meant to contest the Commonwealth Cup in 2020, but unfortunately restrictions scuppered all those plans.