The Top 10 National Hunt Meetings In The UK & Ireland 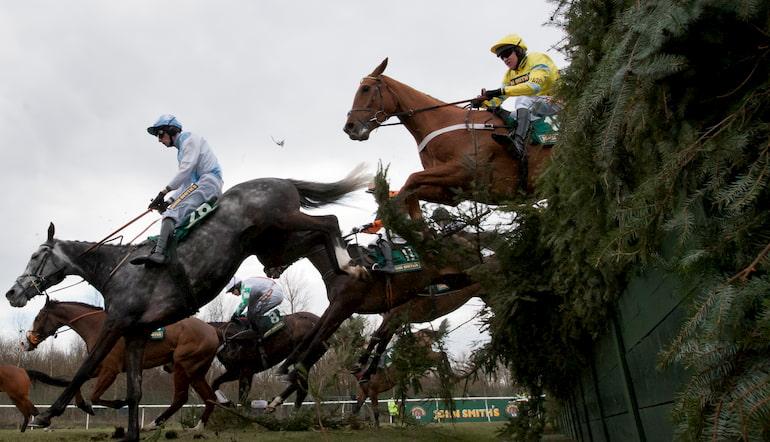 We are truly blessed in the United Kingdom and Ireland. Not only do we have some of the most wonderfully maintained racecourses in the world, but we also have some of best racing Festivals too.

Not to be outdone by their Flat counterparts, National Hunt racing also has its own excellent portfolio of top class Festivals which are well attended every year.

The attire is very different to somewhere like Royal Ascot but the equine action is just as exhilarating.

Whereas many summer Festivals tend to be as much about the social scene than the actual racing, National Hunt’s winter/spring Festivals are pretty much where you will find your “hardcore racing fans”.

Also known as Newbury’s “Winter Carnival” the day itself is all geared around the top staying chase – the Ladbrokes Trophy.

The race is one of the most historical in the country and has been won by many greats in recent years such as Denman, Many Clouds and Native River.

Worth an impressive £350,000, this is generally a contest where legends are made.

The seven-day Galway Festival is as much a test of the liver and the wallet as it is the racing for many participants.

Known locally as “race week”, the Festival traditionally draws hundreds of thousands of people from all over Ireland and beyond.

Held in the last week of July, Galway Racecourse hosts a mixture of both National Hunt and Flat races over the course of the meeting, with the historic €200,000 Galway Plate being the main highlight.

The King George VI Chase is one of the most iconic races in the Jumps calendar and the Boxing Day fixture itself often out-trumps Christmas Day in terms of excitement.

Online betting turnover on the outcome of the race is particularly high during the month of December.

Run over a flat three miles at Kempton Park, the King George and has an illustrious roll of honour including the likes of Desert Orchid and Kauto Star.

The two-day Scottish Grand National meeting is Scotland's richest jumps meeting, with the Saturday highlight being the Scottish National.

Ayr welcomes crowds of around 20,000 for some of the most hotly contested jumps action north of the border.

The Scottish National has the fourth biggest betting turnover of any race in the UK and is the second richest jumps race run on a Saturday.

The Irish like nothing more than an extended Festival and this Punchestown one comes in at a mere five days of competitive National Hunt fayre.

The meeting itself is the pinnacle of the Irish National Hunt season and their end of year Championships, when the Champion Trainer, Owner and Jockey's titles are all bestowed upon their worthy recipients.

The Punchestown Gold Cup is one of the most important chase races of the season in Ireland and quite often you will witness UK trainers making the journey over to compete.

Fairyhouse Racecourse, in the village of Ratoath, County Meath, is the place to be every April for their three-day Easter Festival.

Sunday brings us the valuable Fairyhouse Gold Cup, while Monday (Ladies Day) is the biggest draw of the lot - the €500,000 Boyle Sports Irish Grand National, Ireland's most valuable Jumps race.

The Dublin Racing Festival is the newest kid on the block, having only been conceived out of an idea in 2018, but it has rapidly risen to prominence in a short space of time.

Comprising of seven Grade One, three Grade Two races, along with some new and existing valuable handicaps, the Leopardstown based Festival is an important barometer towards the Irish’s chances at the forthcoming Cheltenham Festival.

In just its first year, the Leopardstown extravaganza produced no fewer than eight subsequent Cheltenham winners - so here is the place to find out the best National Hunt horses to follow ahead of the Festival.

Run over the Christmas holiday period, this 3m5f handicap chase is often one of the most exciting Jumps races of the season.

The Welsh National fixture is Chepstow’s most valuable race day and some of the most popular staying chasers in training return year after year.

Well known winners have included Stearsby, Run and Skip and Burrough Hill Lad, who went on to complete the ultimate double by landing the Cheltenham Gold Cup less than three months later.

In 2019 Potters Corner became the first Welsh-trained horse since 1973 to take the title.

The greatest steeplechase in the world, attracting over nine million TV viewers and a race where many people choose to bet on the horse racing betting as a special annual treat, when generally they wouldn’t do so.

Over 150,000 visitors descend on the course over the three-day fixture to see horses tackling the famous Grand National fences.

Thursday at the Aintree Grand National Festival is Liverpool’s Day - a tribute to the city itself and the people who live there. Friday is Ladies Day and of course the Grand National hors d’oeuvre – the Topham Steeple Chase.

Saturday of course brings us the ultimate challenge in Jumps racing – the Grand National.

The home of The Gold Cup with four days of atmosphere, anticipation and action, all played out in the beautiful natural amphitheatre of Prestbury Park.

The Cheltenham Festival hosts a total of 28 races across those four days, with prize money totalling over £4.5million. Some 265,000 racegoers go through the turnstiles to watch the finest participants in National Hunt compete for the highest honours.

Features each day include the Champion Hurdle, the Queen Mother Champion Chase, the Stayers’ Hurdle, culminating on the Friday with the big one - The Gold Cup.

Follow the latest Cheltenham Festival tips and news with 888sport in the build-up to March's meeting.