National Hunt Horses To Follow Ahead Of The 2021 Cheltenham Festival

With the 20/21 jumps season returning, our horse racing expert picks his 10 National Hunt horses to follow ahead of next year’s Cheltenham Festival 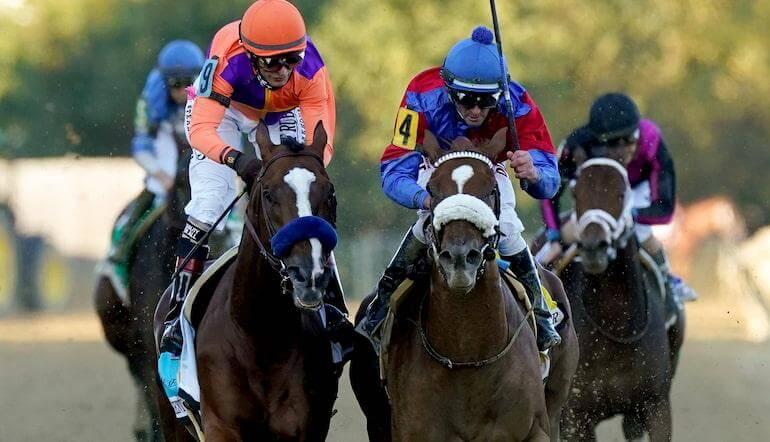 The Cheltenham Festival is the pinnacle of the National Hunt racing season. If you’re reading up on the top jumps horses to follow, Cheltenham is at the heart of the discussion.

Punters begin their search for horse racing tips on the Festival well in advance, with ante post Cheltenham tips a popular topic of conversation in the racing community.

Most of these horses ran at the 2020 meeting but some are relatively unknown quantities in the horse racing betting world.

Without further ado, let’s get stuck into our list of the top Cheltenham Festival horses to follow as we enter the 2020/21 National Hunt season.

Aione won’t be near the top of the Cheltenham Festival betting for any race but he could come into his own over longer distances in the 20/21 jumps season.

He ran a solid race in the Albert Bartlett at the 2020 Festival but looks like a chaser and he could be the stable’s horse for the National Hunt Chase. 888betting odds have him at 20/1 to win that particular race.

The Willie Mullins entries for Cheltenham are always difficult to predict but Aione is likely to be kept apart from Monkfish, who also races in the famous Ricci silks.

One thing I will say: Patrick Mullins, Jamie Codd and Derek O’Connor have an excellent record in this race so it pays to back one of the top amateur jockeys.

This isn’t a Willie Mullins stable tour, don’t worry. However, Allaho (10/1) ticks plenty of boxes to go close in the Ryanair Chase at the 2021 Cheltenham Festival.

He ran an excellent race in the RSA Chase but was outstayed by the fast-finishing Champ and Minella Indo. Still unexposed over fences, Allaho has scope for further improvement.

While the Ryanair Chase may not be as glamorous as the Queen Mother Champion Chase or as prestigious as the Gold Cup, this race could be there for the taking.

While I tipped Simply The Betts for this race back in March, Allaho looks tailor-made for it and he may thrive dropping down in trip.

Runner up in the 2020 Champion Bumper, Appreciate It looks like he will relish going up in trip this year and Patrick Mullins backs up that view.

He got caught for speed against stablemate Ferny Hollow at the 2020 Cheltenham Festival and he could be a real star of the novice hurdling division.

While some would argue that the Ballymore Novices’ Hurdle is the logical step, Appreciate It won a point-to-point over three miles on soft ground. Stamina won’t be a problem.

Punters looking for the best Willie Mullins horses to follow for Cheltenham will have this lad at the very top of their antepost betting lists and he is a general 16/1 shot for the Albert Bartlett.

Bob Olinger caught the eye in his debut win at Gowran Park, thriving in the heavy conditions to trounce his rivals by 10 lengths.

He beat an odds on Gordon Elliott runner on that day and Bob Olinger should be considered as a serious prospect for the Ballymore Novices’ Hurdle if he taking to hurdling.

Henry de Bromhead was full of praise for his horse following that run and the consensus is that Bob Olinger could be an exceptional horse.

Set to be one of the most competitive races at the Festival, Bob Olinger is a 25/1 chance to win the Ballymore. If he takes to jumping, he could take some stopping.

Named after one of the best horse racing jockeys of all-time in AP McCoy, Champ has the capacity to go to the very top of the sport – the Gold Cup is the aim.

His jumping was sketchy at times as a novice but he has a hunger and desire to succeed. In terms of attitude, he is as professional as they come.

If you are looking for Nicky Henderson horses to follow, Champ will be high up on the list and he looks well priced at 12/1 to win the Cheltenham Gold Cup.

He will need to jump better to take control of the staying chasing division but Champ has more pros than many of his rivals.

A raw talent with massive potential, Chantry House could blossom into a household name in the coming months. He ticks all the right boxes to star at the biggest jumps meetings.

Chantry House finished 11 lengths behind Shishkin in this year’s Supreme Novices’ Hurdle but he looks set to appreciate a fence and a step up in trip.

On the face of it, he looks a chaser all over and he could be one of the top JP McManus horses to follow at the Cheltenham Festival in 2021.

According to Gordon Elliott stable tour news, Fury Road is set to stay over hurdles and that makes him one of the 20/21 jumps horses to follow for the Stayers’ Hurdle.

The division is relatively weak, with Paisley Park falling to 50/1 shot Lisnagar Oscar at the 2020 Cheltenham Festival.

Fury Road was one of four horses involved in the sensational finish in the Albert Bartlett Novices’ Hurdle but most expected Elliott to school him over fences this year.

With his form as a staying hurdler looking particularly hot, Fury Road can be one of the top contenders in the division and 20/1 in Cheltenham antepost odds looks like a price.

I was very sweet on Gypsy Island for the 2020 Mares Novices’ Hurdle but an injury sustained in training forced her to miss this year’s Cheltenham Festival.

However, she can make up for lost time with victory in that race in 2021 – and it would take a brave man to back against the Peter Fahey mare at 8/1.

Unbeaten in bumpers, Gypsy Island has just one blemish on her record. She finished second on hurdles debut to 2020 Arkle Challenge Trophy winner Put The Kettle On.

That form now looks particularly strong entering the new season and that is why she is one of our top National Hunt horses to follow in 2021.

Winner of a Fairyhouse bumper on New Year’s Day, Keskonrisk raised a few eyebrows when he was sold for £370,000 at the Goffs UK January sale.

Keskonrisk will now be trained by Joseph O’Brien and he can come on leaps and bounds this year, having made light work of his bumper.

On that day, he finished four lengths clear of a Gordon Elliott horse with form behind Eric Bloodaxe and 2020 Champion Bumper winner Ferny Hollow.

While Flinteur Sacre was my early Cheltenham antepost tip just days after the 2020 Festival, Keskonrisk is well worth a punt to go well in the Supreme Novices’ Hurdle at 50/1.

Bought to be a chaser, The Big Breakaway’s form over hurdles was always going to be a bonus and he finished an excellent fourth behind Envoi Allen in the Ballymore.

Colin Tizzard holds him in high regard and it wouldn’t be a huge surprise to see The Big Breakaway rocket to the top of the staying novice chaser division.

He looks like he will thrive over a fence and he is still widely available at a very appealing 25/1 to win the RSA Novices’ Chase at Cheltenham.

If he makes an impressive debut over fences, that price could crash and The Big Breakaway could be one of the top jumps horses in 2021.