How much is John Gosden worth? Find out everything you need to know about John Gosden, including Gosden horses to follow, John Gosden's son and more! 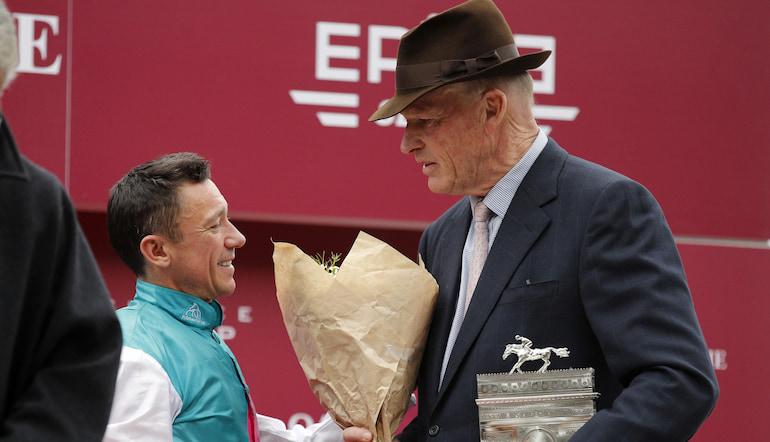 The word “legend” is often banded around rather willy-nilly these days, but when it comes to writing a chapter in a horse racing publication about the UK’s finest ever trainers, the term is certainly befitting when describing John Gosden’s contribution.

In fact, it would be difficult to find any horseman who has had the kind of success Gosden has had during his long racing career.

Perhaps pigeonholing Gosden as simply a UK trainer probably does him a disservice given the success he has had in other countries such as the United States, France and Ireland. The man has been a truly global racing ambassador.

John Harry Martin Gosden was born on 30th March 1951 in Lewes, Sussex, England. After his school years he attended the University of Cambridge where he read Economics.

Education and studies aside, horse racing was always in his blood, probably due to spending most of his informative years watching his father train horses until his father died in 1967.

Gosden can still remember what his trainer father told him, shortly before he passed away, when John was just 16. “‘Whatever you do, don’t become a racehorse trainer. It’s seven days a week and 11-and-a-half months of the year”.

After struggling to get a graduate vacancy after Cambridge, Gosden decided to pursue his dream of training racehorses. He worked briefly as a pupil assistant to two renowned champion trainers in Noel Murless and Vincent O’Brien.

When an opportunity arose to relocate to the United States to work for Tommy Doyle, Gosden seized the opportunity.

After a fairly short period as Doyle's understudy, he took out his own training license in 1979. He made the decision to stay in California where his started off with a very small string of horses.

Gosden’s first Grade 1 winner in the USA was Bates Motel in the Santa Anita "Big" Cap. His stable began to flourish and he was getting quite a name for himself.

According to Forbes, IMDb and various online resources online, John Gosden is worth in the region of £3-4 million.

John Gosden actually has four children - Sebastian, Serena, Theodora and Thaddeus, but it is his professional relationship with Thaddeus (Thady for short) that has made, and will continue to make, the horse racing headlines.

The father-and-son team became the highest-profile partnership yet, since joint-licence arrangements were introduced last year to pair up together. The plan was announced before the start of the flat season 2021/22.

Thady was already a regular on-course representative for his famous father as his assistant trainer – including in Riyadh at the start of the year when Mishriff won the world’s richest race, the Saudi Cup.

John Gosden won his latest trainers’ title in 2020 and Thady is hopeful they can taste some future titles together in these early years of the partnership.

Gosden turned 70 this year, with Thady saying of their new arrangement: “Things aren’t going to change dramatically. We’ll carry on as we are mostly”.

John Gosden’s wife, Rachel Hood, is a qualified lawyer and chairwoman of the Racehorse Owners’ Association. She was elected to Suffolk County Council in 2017.

She met John whilst they were both students at Cambridge University and they have four children together.

The good news for Gosden fans in 2021 is that six of the high-profile horses that he ran on Champions Day will be in training again this season.

Logician, the 2019 St Leger winner, and Terebellum, placed in the Queen Anne and Falmouth Stakes last year are all on his roster.

Super stayer Stradivarius has a huge following and will bid to emulate Yeats by winning a fourth Gold Cup at Royal Ascot in June. Palace Pier, Mishriff, Lord North, all have to be on the Gosden flat horses to follow watch list too.

Where Is John Gosden’s Stable Located?

In 2007 Gosden was offered an opportunity to train at Newmarket from the powerful Clarehaven Stables, an offer he couldn't pass up.

The stables were built early in the 20th century and were bought by the businessman and philanthropist Sir David Robinson in the 1960s.

Who Is John Gosden’s Stable Jockey?

Gosden has a great team working for him at Clarehaven Stables, including jockeys Rab Havlin, Frankie Dettori, and others such as Oisin Murphy who ride for him in their retained colours.

When Did John Gosden Win His First Classic?

Gosden gained his first English classic in 1996 courtesy of Shantou in the St Leger at Doncaster.

He followed that up quickly when Benny The Dip landed the Derby in 1997. As of 2021, Gosden has enjoyed Classic success in Britain 11 times.

How Many Royal Ascot Winners Has John Gosden Trained?

Gosden has won over 40 races at Ascot racecourse, including the Prince of Wales's Stakes three times, the St. James's Palace Stakes with Kingman and the Golden Jubilee Stakes with Malhub.

Does John Gosden Have Social Media?

John Gosden does not have an official Twitter account but there are plenty of John Gosden fan accounts on the platform if you search for them.

Follow your favourite horse racing pundits for all the latest John Gosden news.