AC Milan vs Juventus is one of Italy's top football rivalries. The Juve v Milan debate rages on but who is Serie A's biggest club? 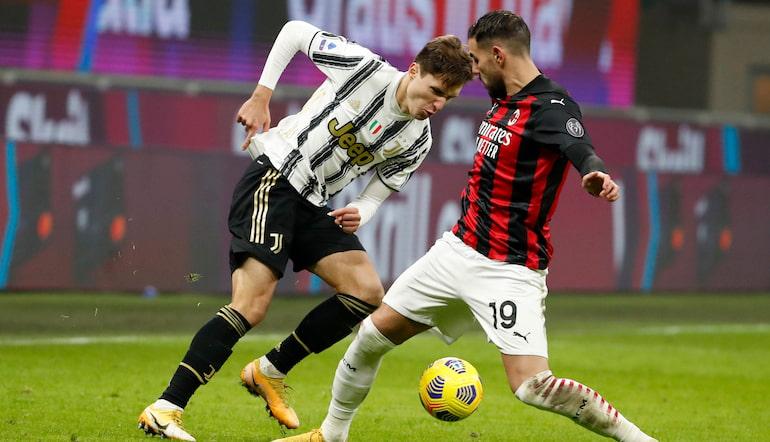 Juventus vs AC Milan stands out on a football odds page. It is one of Europe’s biggest footballing rivalries.

They are two clubs who have dominated across the continent, winning major European silverware and producing some of the most impressive teams in history.

Each club has been through a lot in the 21st century. Slipping from the forefront of European football tips, Juventus bounced back to enjoy an unprecedented period of Scudetto supremacy.

Milan worked their way towards the top in 2020/21 after several years in the relative doldrums.

It’s been a while since either club conquered Champions League betting. Perhaps that’s a reflection on Italian football more than these two clubs.

Ultimately, though, this is a rivalry which has dwindled over the last decade or so. It’s looking to ascend again in the coming years, however, with the two teams somewhere near parity on the pitch once again.

Juventus possess the all-time advantage in this rivalry as it stands, but Milan will be hoping to make ground in the next few seasons. Here’s everything you need to know about the Juventus v AC Milan rivalry…

This is the most played ‘derby’ in Italian football. The teams first clashed in 1901, and the tension between the clubs and cities has flourished since.

Much like many sporting rivalries, this is as much a reflection of the country and the geography as it is the 22 players on the turf.

There are underlying social and political issues between Turin and Milan. They are the two powerhouses in the north of Italy, and two of the country’s biggest tourist destinations.

A sense of envy exists between the two clubs. Juventus have been able to rule Italian football for periods in a way that Milan has rarely enjoyed.

Milan’s peaks have been greater, however, with wonderful European Cup winning sides and some of the most formidable teams in the history of the sport.

Big names have featured throughout the decades in this AC Milan vs Juventus rivalry.

Often competing to become one of the Serie A top scorers, such icons have put in defining performances in title races, and often written their names into the history books.

Even as Juventus have bounced back from Calciopoli to win nine consecutive titles, the Champions League trophy has eluded them. Italian football’s most historic rivalry is so enticing for that reason.

Juventus have long enjoyed an advantage on the domestic stage, but their fans still crave the European success which has made Milan as iconic as any club in world football.

The all-time Juventus vs AC Milan head-to-head record is in Juventus’ favour by a significant margin. With 109 wins to 96, the Old Lady could lose years of matches to Milan before seeing their advantage disappear.

The goal scoring charts are much closer. Milan’s 413 is just 11 fewer than Juventus.

When broken down by competition, Juventus retain the edge. In fact, it’s a bigger lead when it comes to the Coppa Italia. Juve have never lost to Milan in Italy’s main domestic cup or the Supercoppa.

Serie A results between Juventus and Milan are a similar story. Juventus have 68 wins to Milan’s 57, many of which have come over the last few seasons.

They played 20 times (in all competitions) between January 2013 and November 2019. Juventus won 18 of those matchups. This included a run of 13 wins in 14 Serie matches between the two.

Milan have had their own streaks of positive Serie A results against Juventus, but nothing has matched that run. It will take time to close the gap.

Next Juventus vs AC Milan Match

The next Juventus vs AC Milan match takes place on 19th September. Allianz Stadium in Turin is the home of Juventus, and will welcome Milan for this fixture.

Milan landed an emphatic 3-0 win when these teams last met in Piedmont back in May. Juve have traditionally dominated the fixture at home, however, recording 44 wins in 88 Serie A meetings.

Next AC Milan vs Juventus Match

The next AC Milan vs Juventus match is due to be played on 23rd January 2022.

Juventus got the better of their rivals when they last played at San Siro in January of 2021, which followed on from a Coppa Italia semi-final draw at the same venue 11 months earlier.

Milan have won just 29 of 88 home Serie A matches against the Old Lady. The last of those 29 triumphs was a 4-2 thriller in July 2020, which saw the hosts overturn a two-goal deficit with four goals between the 62nd and 80th minute.

Most goals in a Juventus vs AC Milan match

Playing for both clubs hasn’t been particularly unusual in modern times. Some of the world’s best have starred in Turin and Milan.

Andrea Pirlo is the first name that’ll come to mind for many. Milan thought Pirlo was past his best when they decided not to renew his contract, but his peak years were only just beginning.

He joined Juventus on a free and controlled the midfield for years to come.

Others will look to Roberto Baggio, Filippo Inzaghi, Gianluca Zambrotta or Zlatan Ibrahimovic. All four provided years of brilliance for both clubs.