What is the biggest margin of victory in NBA history? We look at the 10 largest wins in basketball's elite league... 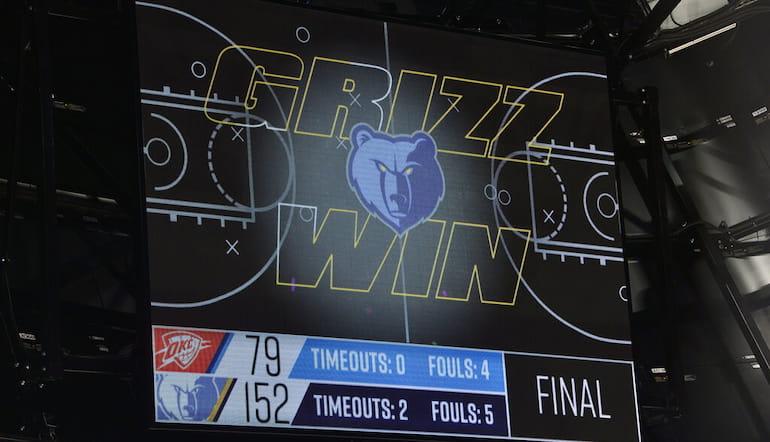 There’s a lot to take into account when looking at basketball betting.

It’s a sport which can be wildly unpredictable over a single game, and there’s no better example of that than the largest margins of victory in NBA history. Here are the 10 biggest NBA blowouts.

Big wins on a random regular season game against a non-competitive team is one thing. Denver, though, hammered the New Orleans Hornets in Game Four of their first round series back in 2009.

The Hornets shot under 32% from the field with Chris Paul and Peja Stojakovic combining to go four-for-16. They turned the ball over 26 times as the Nuggets shot 50% from three-point land, led by a 26, six and seven outing from Carmelo Anthony.

After New Orleans had taken Game Three, this all but wrapped up the series as a contest. Denver, living up to their status as NBA odds favourites, sealed the deal with a comfortable Game Five win on the back of 34 from Anthony.

It’s not a good sign when the other team gets 10 players into double figures. That’s what the Pacers were facing in March 1977 against the Rick Barry-inspired Golden State Warriors, who ran out 59-point victors.

The 1976-77 Dubs finished the season 46-36, only good for third in the Pacific Division. Indiana was 36-46, missing the playoffs for the first time in their history. They didn’t win a postseason series until 1994.

Both teams were below .500 when they met on Boxing Day in 1978. It was complete dominance from the Bucks, outrebounding the Pistons by 54 to 31, and shooting over 60% from the field.

Ernie Grunfeld led the scoring for Milwaukee with 27 off the bench, while just two of Detroit’s starters made it to double figures.

It was an underwhelming campaign for both franchises – the Pistons finishing 30-52, the Bucks at 38-44 – but Milwaukee at least made some history with what was the third-biggest blowout in NBA history at the time.

Charlotte was just 32-41 coming into this game. Memphis was 19-43 and fielded a starting five of Jarell Martin, JaMychal Green, Dillon Brooks, Deyonta Davis and Tyreke Evans. They were outrebounded by 15 and shot under 40% from the field.

Kemba Walker’s 10 treys and 46 points were the standout for the Hornets, but the All-Star guard was ably supported by his teammates, with Frank Kaminsky, Marvin Williams and Jeremy Lamb combining to drain another eight shots from beyond the arc.

This season didn’t amount to much for either franchise, but this loss helped Memphis secure the fourth overall pick which became defensive wizard Jaren Jackson Jr.

Nine Syracuse Nationals reached double figures when they faced the New York Knicks on Christmas Day 1960. It was a different world in NBA tips today back then, but a 62-point defeat was still utterly humiliating.

Following the heftiest blowout in league history at the time, New York finished the season with just 21 wins. They selected Tom Stith second overall as a result. In true Knicks fashion, the pick did not work out and they didn’t return to the postseason until 1966-67.

It’s so very Kings to be on the wrong end of an historic blowout.

This massive loss came at the hands of their north California rivals in November 1991 with Chris Mullin scoring 32, supported by 27 from third-year wing Šarūnas Marčiulionis, who racked up 12 free throw attempts.

NBA player props were blown out of the water by an explosive offensive showing from the Dubs. Tim Hardaway only scored seven, but managed to collect seven assists as the Kings defence crumbled before the Warriors’ eyes.

Already featured twice on the positive side of heavy wins in this article, the Golden State Warriors have faced a few blowouts of their own. One such occasion was in March 1972.

The most surprising thing here is that Wilt Chamberlain scored just 10 and Jerry West was held to 17.

Pat Riley contributed 17 from the bench, though, and Gail Goodrich dropped a 30-piece on the Dubs, who shot a mere 32% from the field. Cazzie Russell top scored for Golden State with just 13 points.

Portland went 46-36 in 1997-98 with a roster including Arvydas Sabonis and Rasheed Wallace. Both played in their February matchup with the Pacers, but they were simply unable to generate offence.

Indiana was dominant at the other end of the floor, too. Reggie Miller and Chris Mullin had just 21 points combined, but it was a complete team effort with Mark Jackson contributing 18 and Jalen Rose chipping in with 13 from the bench.

Long before the Cavaliers and Heat had a LeBron James-provoked rivalry, they were involved in the biggest NBA win of all-time. This record stuck for two decades.

The Cavs built a lead soon after tip off with Mark Price putting up 18 points in just 17 minutes. Handing over to the bench, John Battle and Hot Rod Williams continued to pile on, delivering a brutal loss to the Heat in just their fourth season in existence.

With Ja Morant out, this win was as much a testament to the Memphis Grizzlies’ depth as it was a reminder of the Thunder’s rebuilding status.

Shai Gilgeous-Alexander sat out for Oklahoma City, leaving a rotation which was heavily focused on player development to put it kindly.

The relentless Grizz enjoyed racking up the points. Leading 72-36 at the half, they didn’t let up, with Jarrett Culver, Sandi Aldama, Brandon Clarke, De’Anthony Melton, Xavier Tillman and John Konchar all scoring 11 or more off the bench.

OKC collected just 26 rebounds to Memphis’ 53, and posted some particularly ugly individual statistics. Jeremiah Robinson-Earl, for instance, didn’t make a field goal and was a -56 in 24 minutes of play.