Lucy Bronze Net Worth - How Much Is Lionesses Star Worth?

One of England's greatest female footballers, Lucy Bronze net worth is the topic of much debate. Read up on her salary, career achievements & more here...

If you follow women’s football, you’ll know all about Lucy Bronze. In fact, you might have heard of her even if you aren’t too clued up on the women’s game.

That is because Bronze is one of England’s most successful female players, representing her country over 80 times and winning countless accolades throughout her career.

Bronze has enjoyed plenty of success in terms of trophies but has also received individual recognition on more than one occasion – and that is testament to her impact and influence on the sport.

She defied football betting odds to become the first English footballer to win the UEFA Women’s Player of the Year award in 2019, cementing her status as an all-time great.

How Much Is Lucy Bronze Worth?

A pillar of consistency for the England national team since making her Lionesses debut back in 2013, Bronze is regarded as one of the top female players on the planet.

Climbing up the ladder to become one of the highest paid female footballers, Bronze is now recognised by soccer fans across the globe.

Without further ado, it’s time to look at Lucy Bronze net worth figures as well as her life off the football pitch. How much is Lucy Bronze worth? Scroll down to find out!

While exact wages in women’s football are often kept out of the public eye, there are a few online reports that hint at Lucy Bronze’s wage at Manchester City.

In 2019, the Daily Express reported that Bronze was earning an estimated £140,000 at Lyon Women while the Central Contract with England guarantees £25,000 per year from the FA. 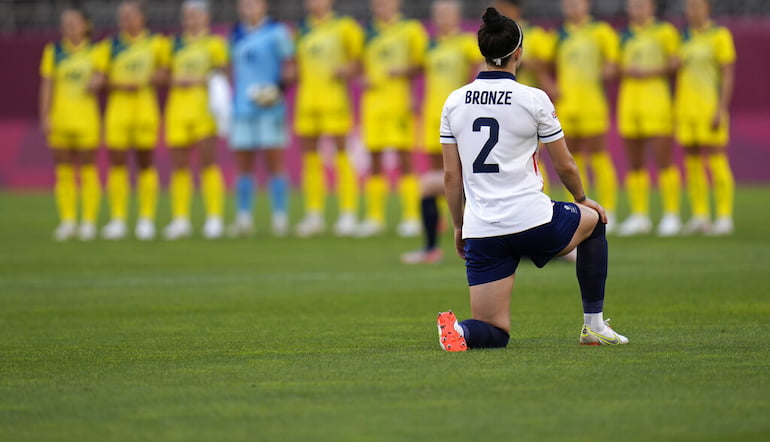 Upon returning to the Women’s Super League giants, Bronze was overjoyed – stating her aim to take City to new heights in the female game.

“I’m really happy to be back here at City – I always had it in my mind that I would return one day, and it just feels like the perfect time and opportunity right now,” Bronze said.

“I really enjoyed my time in France, but there were so many things that I missed and it’s great to be back.

“I feel like I’m returning as a better leader and person who is capable of bringing similar success to the table here in England both domestically with City and internationally too.”

With Bronze earning an estimated £140,000 per season, she has managed to build a healthy financial portfolio and her net worth is reportedly around £1 million.

It is worth noting that these Lucy Bronze wealth figures are estimates, though we can safely assume that her success on the pitch has contributed massively to her net worth figure.

Her impact and influence – both as a player and as a role model for aspiring women – have helped to attract a number of endorsement deals, which also add to her growing wealth.

Advertisements and sponsorship deals are much smaller in the women’s game but each new endorsement offer helps to enhance her financial status.

At just 30 years old, Bronze is likely to be around for many years and the England star could continue to build her estimated wealth should the WSL salary cap increase in the future.

Who Is Lucy Bronze?

Born in Berwick Upon Tweed on October 28th 1991, Lucy Bronze is one of the best women’s football players to play for England.

Having recently celebrated her 30th birthday, Bronze burst onto the scene as a teenager but had to wait until 2013 to represent England on the international stage.

Bronze was born to a Portuguese father and an English mother yet grew up in Berwick Upon Tweed along with two siblings, Sophie and Jorge.

Later, she moved to the University of North Carolina before returning to Leeds Beckett University to complete her BSc Sports Studies degree in 2013.

According to online estimates, the Manchester City full-back is earning £140,000 per season – making her one of the top paid players in the Women’s Super League.

No, Lucy Bronze’s marital status is single but some reports hint that she is currently in a relationship with Keira Walsh – though the pair are yet to confirm these rumours.

Walsh and Bronze both play for Manchester City and there have been a few images on Instagram that would suggest they are one of the hottest couples in football.

In some images, Bronze and Walsh can be seen partying together in Dubai for New Year’s celebrations but neither party has made an official statement about the gossip.

One thing we do know is that Walsh has been open about her sexuality in the past and that means a potential relationship with Bronze is certainly a possibility.

The two are connected through Lyon and Man City but both are now in Manchester and playing for the WSL side – further contributing to the rumours.

While we won’t speculate on whether these reports are accurate or not, we hope to see both Lucy Bronze and Keira Walsh in happy relationships in the future.

Lucy Bronze has played for some of the best women’s football teams in the world, with the likes of Liverpool, Manchester City and Lyon benefiting from her skillset.

However, it was at Everton in 2010 where she really started to attract attention – with Merseyside rivals Liverpool moving to sign her in November 2012.

This was a positive move for her career as she helped Liverpool win back-to-back WSL titles in 2013 and 2014, clinching the PFA Women’s Players’ Player of the Year award.

When Manchester City came knocking, Bronze just couldn’t turn the opportunity down and she joined the football prediction giants in 2014. 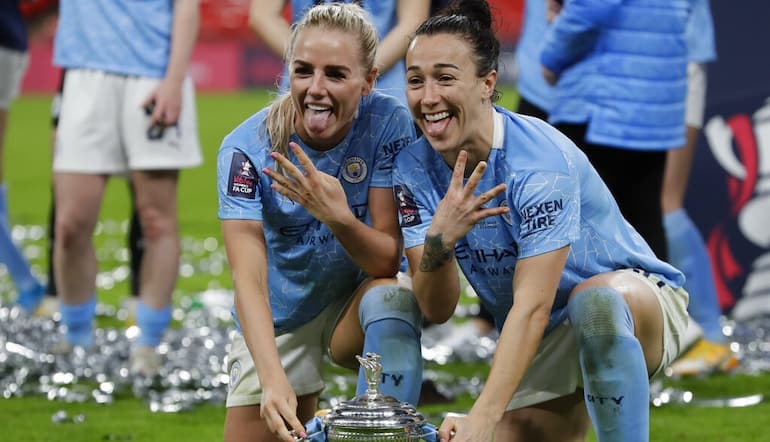 She enjoyed three successful seasons at the club before Lyon offered her the chance to go and challenge for European honours – and she did just that in her first season in France.

In fact, Bronze won three Champions League medals during her time at Lyon but opted to move back to Man City in September 2020.

Now, Bronze is under contract at the club on a two-year deal but a potential extension for the England star could see her light up the Women’s Super League for years to come.