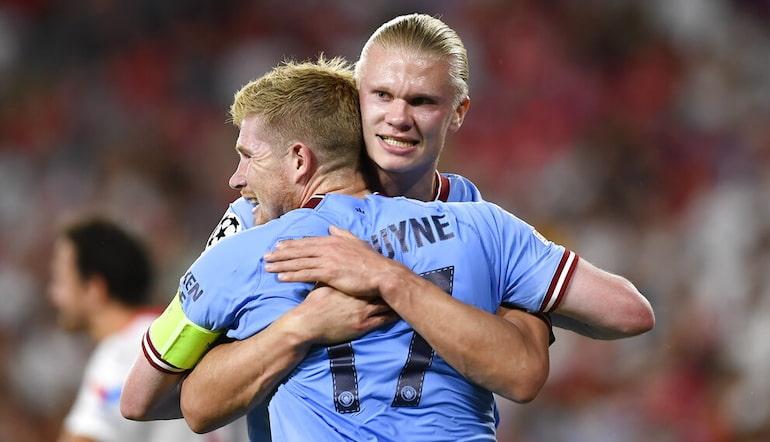 After a win over Chelsea in the League Cup on Wednesday night, Manchester City are overwhelming Premier League betting favourites at 2/15 against Brentford in Saturday’s early kick-off.

Brentford have challenged the top sides at times, but they are winless on the road this season and were knocked out the League Cup by Gillingham a few days ago. Last season, the Bees hit a bit of a mid-campaign rut, and without a win in five in all competitions, they seem to have fallen into a similar slump. Fortunately, the World Cup can break them out of that, but it is unlikely to end at the Etihad Stadium this weekend.

Erling Haaland is still dealing with a minor injury, which might provide Brentford with some hope. Haaland came off the bench against Fulham last weekend, however, posing a constant threat and ultimately scoring the match-winning penalty. The Norwegian is expected to start on Saturday – he is 4/11 to find the net, and 11/2 to score yet another hat-trick.

The Brentford attack, with Ivan Toney back in Premier League action, will create some chances on the break. They are in the top half in expected goals generated, and City have conceded a few goals at home this term. Brentford to score is value at Evens.

The spread favours City by 2.25, which is more to do with Brentford’s leaky defence than City’s recent results. Yes, they have had some emphatic wins at home, but Pep Guardiola’s side haven’t won by three clear goals in their last four home fixtures.

A City win and both teams to score at 5/4 has the best value in the results markets. Once we have further news of Haaland’s availability, it could be worth adding the Norwegian to score in a bet builder if you’d prefer lengthier odds.

Bet on Manchester City at 888Sport

The latest Manchester City tips can be found on this page throughout the 2022-23 season from upcoming Premier League matches to their high-profile Champions League contests as Pep Guardiola’s team look to have yet another successful campaign.

No team dominates outright betting quite like Manchester City. Strong Champions League odds favourites at just 5/2 to lift the trophy, City are also odds on to defend their Premier League crown after they won on a dramatic final day in 2021-22.

Despite seeing Liverpool lift both domestic trophies last season, City are the favourites for both the FA Cup and EFL Cup.

On top of the team being at the summit of outright betting markets, Erling Haaland is the 29/10 favourite for the Premier League Golden Boot, which is bound to attract many bettors.

Naturally, City’s stars are also among the frontrunners to win PFA Player of the Year.

Guardiola has constructed an all-conquering squad at the Etihad Stadium – check back at 888Sport to keep up to speed with the latest Manchester City outright odds throughout the campaign.

The best value on City to win a trophy has to be with the Champions League given their remarkably short price of just 4/7 to lift the Premier League once again. As great as this City team is, that doesn’t represent value with the strength of Liverpool.

Manchester City are going to be at the centre of outright betting discussion throughout the 2022-23 season, but even this City team misses out on silverware occasionally. They have won just three major trophies over the last two seasons.