MLB Umpire Salary - How Much Do Baseball Umpires Make?

The average earnings for MLB umpires isn't as high as you may think. We look at the baseball umpire salary figures and discuss how much an MLB official earns... 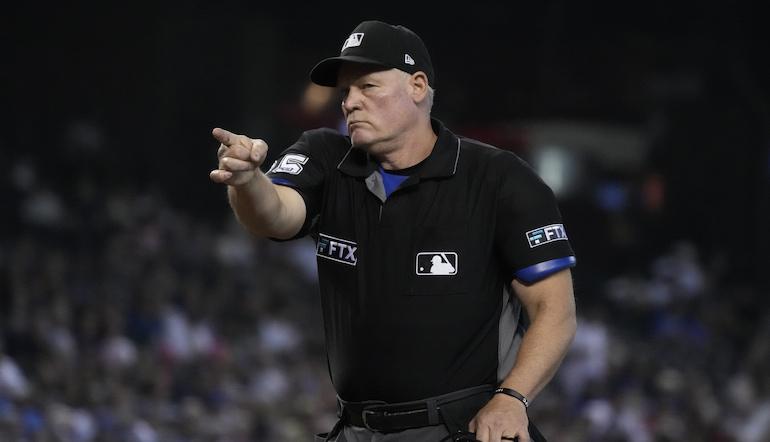 Umpires are a factor to consider when it comes to MLB betting. Strikezones vary significantly from umpire to umpire, whether in size or consistency, and some have a tendency to eject players or coaches quicker than others.

Those who are regularly betting on baseball will get to know the Major League umpires.

How Much Do MLB Umpires Earn?

Officiating in baseball has a greater impact than in many other sports. The pressure is enormous to get each call right, whether judging the zone or evaluating a split-second play on the bases.

With 162 games in the regular season, MLB provides countless opportunities to take advantage of sports betting offers. Let’s take a look at the life of the men who oversee America’s Pastime…

Obviously, there are plenty of players earning way more than that either through arbitration or free agent contracts. Gerrit Cole had the highest base salary in 2021 at $36 million.

Even though they’re in the shadow of the game’s real stars, there’s no shortage of money in the Majors.

This pay only comes in during the months baseball is being played. So even those working at the higher end of the Minors are often in another job to supplement their income.

It can be a long, long wait in the upper Minors unfortunately. Some big league umps hang around for decades, becoming familiar faces at MLB stadiums.

There’s a significant salary leap when an umpire gets the call-up to the bigs. It’s a similar situation to what players face, with plenty of perks in addition to the base salary, though they still earn less on a per game basis than their peers in the NHL, NFL and NBA.

MLB umpire crews are generally thought of as the four on the bases. There’s the home plate umpire, who gets plenty of camera time calling balls and strikes. An umpire will also be stationed on each base.

It’s not uncommon, however, for umpires to be in a crew of six. The extra two officials are placed down the leftfield and rightfield lines.

Their responsibility is primarily calling balls fair or foul, and they will have a key role particularly when it comes to home runs towards the foul pole.

An umpire crew will be put on a series together. Given the physical demands of being at home plate for a three or four-hour game, they will rotate their roles.

At many levels, the home plate umpire has additional responsibilities, but in MLB, many of these are reassigned to the ‘crew chief’.

The crew chief is the most experienced in the group. They will lead replay review situations, make the final call on ejections, and be the point of contact for the league office.

In addition, the crew chief will be involved in all replay reviews with another of the umpires, and they will be the ones who announce the final decision.

How To Become An MLB Umpire

Of course, it’s not an easy path to become an MLB umpire. There are considerable financial costs, and it takes a great deal of time to get anywhere near The Show.

According to MLB.com, aspiring umpires must first enrol at one of the USA’s two approved umpiring schools.

These are called Harry Wendelstedt Umpire School and the Minor League Baseball Umpire Training Academy. They are on the east coast of Florida (there are worse places to go and learn your trade), but it doesn’t come cheap.

This is a five-week course, but it isn’t as straightforward as progressing from that to the umpiring in professional baseball. They teach you the rules, signals and everything an umpire would need to thrive.

As part of the process, though, they are also evaluating each candidate to see if they have got what it takes to be pushed into the next stage.

Less than a fifth of people who complete the course are taken onto the Minor League Baseball advanced course. This is a shorter, one-week program.

Usually taking place in the winter months, the standout candidates from the advanced course will be invited to officiate in the lower levels of the Minors in the following season.

From then on, umpires will be monitored. Good performance will be rewarded with progression up the Minor League levels (just like players).

It can take many years to get towards Triple-A, however, and even once an umpire reaches the top of the Minors, they have to wait for one of the 68 Major League jobs to open up.

Through personality, controversy or sheer longevity, MLB umpires earn their own fame. Sometimes it would be better described as notoriety.

There are various methods to judge MLB umpires. For instance, some metrics place Tripp Gibson and Alan Porter as the best umpires in 2021, though they are by no means the most famous.

Joe West is unquestionably the most famous active MLB umpire. West is the all-time leader in games umpired, and first featured in a Major League game way back in 1976. Gerry Davis is fourth on the same list.

The controversial Angel Hernandez is 57th in total games umpired, and has umpired in the Fall Classic on a couple of occasions.

Where many umpires are barely known by fans, Hernandez is renowned with baseball followers across the globe. His inconsistencies with balls and strikes make him the nightmare home plate umpire if the World Series trophy is on the line.

MLB Betting Tips
About the Author
By
Sam Cox