Who are the most successful Formula One teams? We look at the F1 teams with the most Constructors Championship titles in motorsport history 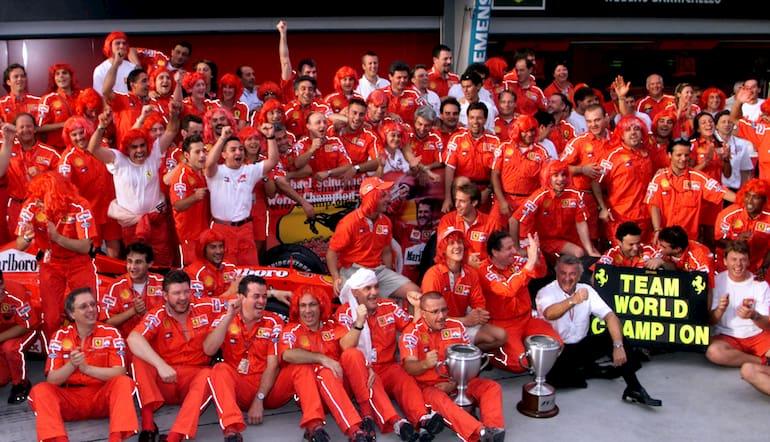 The most successful teams in Formula One history have had sustained periods of dominance. The three teams with the most constructors titles still feature as fans search for an F1 bet. Others have come and gone.

With the eyes so often focused on the Drivers’ Championship, the constructors can often be forgotten.

In recent years it has been a forgone conclusion, but there are notable instances throughout F1 history of teams winning the constructors despite not having the title winning driver.

The team with the most Grand Prix wins unsurprisingly sit far clear with the most constructors titles. Here are the most successful teams in F1 history, with only nine winning the Constructors Championship on more than one occasion…

Ferrari are the heart of Formula One. Driving the scarlet Scuderia is the dream for young racers. They are the only team to have competed in every championship since 1950 and have collected Constructors’ titles along the way.

A couple were won in the 1960s with Phil Hill and John Surtees, Nicki Lauda won two Drivers’ Championships as Ferrari won four Constructors in five years in the 1970s. Success in 1982 and 1983 preceded a long drought.

Ferrari had to wait until 1999 for their next team success, which was followed by five more glorious seasons for the team and Michael Schumacher.

As Red Bull and Mercedes have enjoyed Ferrari-level spells of invincibility, the Scuderia has been in a down period. How long will they have to wait for Constructors’ title number 17?

Although languishing at the back of the grid in recent years, Williams are the second-most decorated team in the sport with nine Constructors’ Championships.

Claire and Frank Williams stepped down midway through the 2020 season, but the Williams name is expected to remain in Formula One for the foreseeable future. Will they return to title contention under new ownership?

McLaren have the second-most drivers’ titles with 12, but their eight Constructors’ Championships brings them in behind Williams here.

They are the second-oldest active team on the grid and are heading back towards serious contention for race victories after a difficult period.

Their first team success was in 1974 as Emerson Fittipaldi pipped Clay Regazzoni to the title. Further celebrations came in 1984 and 1985 with Nicki Lauda and Alain Prost before four consecutive titles from 1988 to 1991.

Their most recent Constructors’ Championship was 1998 as Mika Hakkinen won the Luxembourg and Japanese Grands Prix to win the first of back-to-back titles.

The first of which came in 1963 as the great Jim Clark won seven races, a feat they repeated in 1965 with Clark winning six times.

Drivers’ Championships for Graham Hill, Emerson Fittipaldi, Mario Andretti and Jochen Rindt followed. Many of the sport’s icons raced for Lotus in their 489 race starts including Stirling Moss, Nigel Mansell and Ayrton Senna.

The black and gold of the Lotus 77 is one of the best sights in motorsport – Lotus will forever occupy a significant place in F1 history.

Has any team enjoyed such sports betting dominance over the last few years? Mercedes are the perfect team, and along with Lewis Hamilton, they have left the rest of the paddock in their wake.

The Silver Arrows have won all seven of their Constructors’ titles in a row, the first team in F1 history to do so. They have got quicker year-on-year.

Stability and accountability instilled by Toto Wolff has made Mercedes an unbeatable force.

Arriving in Formula One in 2005, even the ever-ambitious Red Bull could not have dreamt up the period of dominance their team enjoyed from 2010 to 2013.

Sebastian Vettel won four titles on the bounce as Red Bull built a sizeable gap between themselves and the rest of the grid. 2010 and 2012 were relatively competitive, but Red Bull and Vettel were miles clear in 2011 and 2013.

Christian Horner remains, Vettel has moved on, and Max Verstappen has emerged, but Red Bull have not been serious title contenders in recent years despite picking up race wins.

Charles and John Cooper started building racing cars just after the Second World War. They were battling with the elite by the early 1950s, first entering a car in the 1950 Monaco Grand Prix.

They won the second and third Constructors’ titles in F1 history in 1959 and 1960, winning 11 races across the two seasons. Jack Brabham was a back-to-back champion driving for Cooper as they dominated throughout.

After his father’s death, John Cooper sold the team in 1965 and they competed in their final Grand Prix in 1969.

First entering Formula One in 1962, Brabham were inventive, provocative and often unpopular. Their famous fan car won one race before being withdrawn in 1977, 10 years after their second Constructors’ title.

Their team successes in 1966 and 1967 were followed by drivers’ glory in the early 1980s for Nelson Piquet. Despite the Brazilian’s individual honours, Brabham fell short in the Constructors’.

Bernie Ecclestone sold the team in 1988 to take up a role with Formula One. Sadly, Brabham’s Formula One efforts only lasted a few more years – they collapsed under the ownership of Middlebridge in 1992.

Renault have jumped in and out of Formula One. They arrived in 1977 and built competitive cars for the most part until they walked away at the end of 1985.

Throughout the sport’s history, they have been on and off as an engine supplier, too.

The French company returned as a constructor for 2000, purchasing Benetton. They re-branded as Renault F1 team for 2002 and won their first of consecutive titles in 2005 as Fernando Alonso was crowned world champion.

Renault left the sport again in 2012 but returned in 2016. Alonso will be driving for them again in 2021 after Daniel Ricciardo decided to leave for McLaren.