NBA Teams With Most Championships - Who Has Won The Most Titles?

Which team is the most successful in NBA history? Our expert picks his way through the list of NBA teams with most championships... 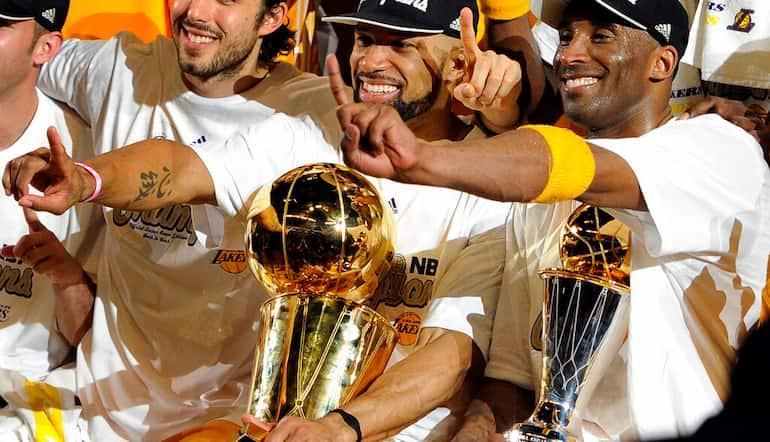 Talent and fortune are required to come out on top in NBA odds and win a title.

It’s a gruelling challenge to come through 82 games of regular season basketball with minimal injuries and enough energy to put up 16 more wins in the postseason.

The preseason basketball betting markets can make an estimation of the title favourites, but that can change quickly with breakout campaigns and injuries.

One bad landing can wipe out a team’s title chances. One smart trade can swing things in a team’s favour.

Six NBA franchises have never even made the Finals. Five other active teams are yet to win their first title. Here are the NBA teams with the most championships, starting with a trio on two.

While 11 franchises are yet to win a ring, no team with multiple championships has had to wait as long between titles as the Milwaukee Bucks.

Giannis Antetokounmpo’s 50-point masterpiece to clinch the 2021 NBA Finals secured the Bucks’ second franchise championship and first in half a century.

As long as Giannis is in Milwaukee, the Bucks are going to be a feature in online betting for the NBA title.

It’s hard going back-to-back. The arduous nature of the playoffs can take its toll on a roster.

The Houston Rockets got their two titles in consecutive years in the mid-nineties, however, with Hakeem Olajuwon playing some of the most dominant two-way basketball in league history.

Houston also reached two Finals in the 1980s, and they came close to a ring in recent years, particularly when James Harden and Chris Paul were together.

The New York Knicks are among the most valuable sports franchises in the world. They have also long been a running joke in the NBA, but that looks to have changed under the stewardship of Tom Thibodeau.

New York are still a long way off winning a third title, though they are heading in the right direction as they look to lift the Larry O’Brien trophy for the first time since the 1970s.

Only the Lakers have lost more Finals than the Knicks.

Founded in 1988, it’s pretty remarkable that the Heat have reached the Finals six times.

The Heatles were responsible for four of those, of course, with LeBron James, Dwyane Wade and Chris Bosh going back-to-back in 2012 and 2013.

Their most recent trip to the Finals came in the Orlando bubble in 2020 as they shocked the league with their impressive run through the Eastern Conference.

The Bad Boys made three consecutive Finals appearances between 1988 and 1990, winning two. Detroit had already got two Finals losses on its record from the 1950s.

Since the days of Isiah Thomas and the controversial Bad Boys, the Pistons have fluctuated in and out of relevance.

Reintroducing their identity in the noughties brought a third franchise title, though, as they beat the Lakers in the 2004 Finals. That’s the last title won in the NBA without a truly elite player.

A true marquee franchise, the Philadelphia 76ers haven’t won a title since 1983.

They have made the Finals just once since then, thanks to an historic string of performances from Allen Iverson in 2001. Philly is as desperate for a title as any NBA city.

The Process is yet to reap the rewards Sam Hinkie had hoped for, but with Daryl Morey running basketball operations, the Sixers are in the mix for a title, and could add a fourth ring in the coming seasons if Joel Embiid stays healthy.

It all started when the Spurs drafted Tim Duncan.

Pairing Duncan with David Robinson, and with Gregg Popovich in charge, San Antonio made their first ever Finals in 1999 and defeated the Knicks. More rings followed in 2003, 2005 and 2007.

A fresh iteration – still led by Popovich and with Duncan starring – lost to The Heatles in 2013, but came back to end Miami’s run in 2014 with Kawhi Leonard announcing himself on the biggest stage.

No other franchise with more than one title is undefeated in the Finals.

Thanks to Michael Jordan, Scottie Pippen, Phil Jackson and some timely performances from role players, that’s what the Chicago Bulls achieved in the 1990s as they went 6-0 in the season’s last series.

Jordan’s mid-career retirement flipped NBA predictions on their head. Chicago had already completed a threepeat. We’d likely be talking about seven or eight if he’d not taken up baseball.

Chicago has been through some difficult seasons since Jordan retired. They are still waiting to see a true title contender in the Windy City.

The Warriors won two titles when they were in Philadelphia. Their third arrived in 1975 thanks to a team led by Rick Barry.

Those titles aren’t what come to mind for 21st century NBA fans and the Warriors. The five straight Finals appearances under Steve Kerr are how many generations will remember the Golden State Warriors.

That’s not to mention the Splash Brothers, the controversial signing of Kevin Durant and blowing a 3-1 lead in 2016.

A couple of the greatest NBA dynasties wore the iconic Celtic green. Bill Russell and co were unbeatable in the 1950s and 1960s.

Larry Bird and Kevin McHale led Boston to three titles in six years in the 1980s. The last of those three crowns began a long drought for the Cs.

A Finals loss in 1987 was the closest they would come to a ring until 2008 when a string of win-now moves formed a superteam of Paul Pierce, Kevin Garnett and Ray Allen.

Boston lost the 2010 Finals to the Lakers and Kobe Bryant – they will hope it’s not such a long wait for their next title.

The Lakers were based in Minneapolis from 1947 to 1960. They won five of their titles in that period. These are still won by the same franchise and are included in the 17 tally.

Once they moved to California, the Lakers suffered a run of Finals losses in the 60s before beating the Knicks in the 1972 Finals.

Dominance followed in the 80s, led by Magic Johnson and Kareem Abdul-Jabbar, but the nineties was a barren period.

Kobe Bryant and Shaquille O’Neal teamed up to threepeat before Bryant and Pau Gasol went back-to-back in 2009 and 2010. LeBron James and Anthony Davis led the Lakers to their 17th ring in 2020, tying them with the Celtics.