Crouchy is a household name among football fans but how do Peter Crouch net worth figures compare to his peers? 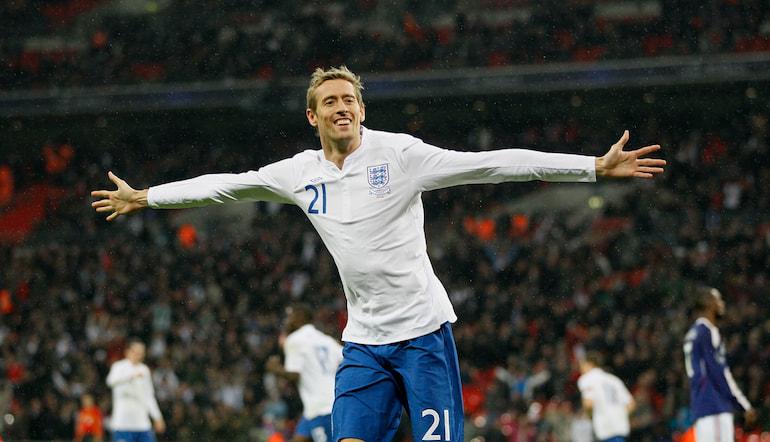 Peter Crouch has walked the well-trodden path from football star to celebrity. Crouch, a well-liked footballer, has become a popular podcaster, pundit and all-round television personality.

It’s a while since Crouch was a factor in football odds. Despite earning 42 England caps, he was often underrated as a complete striker.

A career which led to a couple of Premier League records and a long stay in the top flight came to an end in 2019 after a short stint with Burnley.

The Macclesfield-born centre forward is best remembered by sports betting fans for his time just south of his birthplace with Stoke City.

Crouch spent the majority of his career in the Potteries, though he enjoyed a true journeyman career, playing for 11 different clubs from Dulwich Hamlet to Liverpool.

Once at the most successful club in England, and now all over our television screens, here’s everything you need to know about Peter Crouch.

How Much Is Peter Crouch Worth?

Peter Crouch’s net worth is somewhere between $25 million and $35 million according to CelebrityNetWorth.com.

Crouch featured in 19 different Premier League seasons – he will have accumulated a healthy salary over his playing career, though his weekly pay check will have been far from the dizzying heights of Paul Pogba and David De Gea’s earnings in 2021.

Crouch has appeared as a pundit on Amazon Prime, BBC and BT Sport. While his salary for these roles is unknown, it’s unlikely to be anything close to his salary from his playing days when he was earning millions a year during his peak.

Compared to other big-name footballers, Crouch was not the most marketable. He has never been a regular on TV adverts and billboards, but he will have received considerable payments from his partnership with Puma.

Peter Crouch’s podcast is inventively called ‘That Peter Crouch Podcast’. It is a BBC production, which has been running since September 2018.

On the BBC website, the podcast is described as, “Peter Crouch, Tom Fordyce and Chris Stark bring you their guide to being a professional footballer.”

It has become one of the most popular football podcasts around. Crouch’s profile has grown significantly off the back of it – his trademark sense of humour and refusal to take himself too seriously shines through.

The podcast has already hosted some high-profile guests, none more so than Prince William. Sean Dyche, Louis Theroux, Liam Gallagher, Theo Walcott, Tony Pulis and many others have joined Peter, Tom and Chris to discuss all things football.

Peter Crouch is married to Abbey Clancy. The couple’s wedding was in 2011 following their engagement in 2009. They had been dating since 2006.

Crouch and Clancy have four children together. Sophia Ruby is the eldest, and was born a few months before their wedding in 2011. Their second daughter, Liberty Rose, was born in June 2015.

Their two sons were born in 2018 and 2019. Crouch and Clancy have often featured on television together, including in Save Our Summer on the BBC, which aired following the cancellation of Euro 2020.

It’s safe to say Crouch was not the fastest football player even in his pomp. That doesn’t matter too much when you stand at 6’7, though.

Crouch is one of the tallest players in Premier League history – few other outfield players have broken the two-metre mark.

While he was far more accomplished than being a pure target man, Crouch’s teams often resorted to lumping it long to him. He was, of course, a huge threat at set pieces, too.

Crouch’s 53 headed goals is the most in Premier League history, and five more than Alan Shearer.

Peter Crouch has released multiple books. The first of which was called ‘Walking Tall: My Story’. This autobiography came out in 2007 – little did we know at that point that the lanky striker had another decade-plus left at the top of the game.

His books have been well received for the most part. ‘How To Be A Footballer’ rates 4.6 out of five on Amazon with nearly 3,000 reviews worldwide.

The follow up has the same rating from fewer reviews, and was awarded Sunday Times Bestseller.

The Daily Mail was very complimentary. “You can dip into this book anywhere and will find delights: all football fans aged from nine to 90 will love it.”

More will be revealed about Crouch’s third book in the coming months, but it’s sure to be another popular read.

The author of viral tweets aplenty, Peter Crouch is a popular figure on Twitter. His verified account, with the handle @petercrouch, has over 940,000 followers at the time of writing.

Crouch’s Twitter account is every bit as light-hearted and self-deprecating as his podcast. He’s a must-follow for any fan of Premier League football.

Peter Crouch first treated the world to the robot in an England shirt. Crouch broke out the dance after scoring against Jamaica in 2006, and it quickly became an iconic moment in his career.

🤖 @petercrouch discusses how much people love the robot celebration.

🤭 Do you think @piersmorgan got him to do it?

Wearing the red and white stripes of Stoke, Crouch brought the robot back to celebrate his 100th Premier League goal.

Football Betting
Football Tips
About the Author
By
Sam Cox