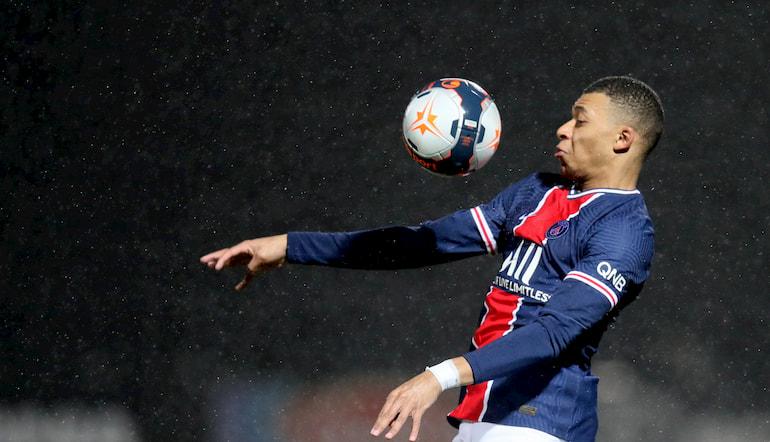 The fastest football players in the world are always a football betting factor.

While pace isn’t a necessity for elite footballers, it can change matches. Being able to run in behind or recover in defence is invaluable.

Fastest Footballers In The World (2022):

The quickest footballers in the world are not necessarily in the Golden Boot running – some are creators, and many operate from full-back or wing-back roles.

Here are 10 of the fastest football players on the planet, led off by Paris Saint-Germain superstar and World Cup winner Kylian Mbappe.

A sports betting favourite to win the Ballon d’Or, Kylian Mbappe is an unstoppable force. Since signing for PSG, Mbappe has scored 104 goals in 145 matches. His 16 goals in 39 appearances for France is almost as impressive.

While his pace petrifies defenders and makes managers rethink their tactics, Mbappe has grown as an all-round footballer. He’s clinical in front of goal and his close control is sublime.

Players as mind-bendingly fast as Mbappe can sometimes see their speed overshadow their talent – the World Cup winner is arguably the most valuable footballer in the world.

His future with England might be uncertain, and Joao Cancelo has displaced him at Manchester City, but Kyle Walker is still one of the quickest players around.

Walker turns 31 in May. He isn’t as effective going forward as Trent Alexander-Arnold or as solid defensively as Aaron Wan-Bissaka, though his importance on one of the world’s strongest teams cannot be overstated.

Walker has stuck at City through some periods of defensive chaos – his pace has been invaluable to save City from countless counters.

Signed to Athletic Bilbao’s youth setup at 18, Inaki Williams has flourished at the Basque club. Interest from the Premier League’s biggest clubs never resulted in a move – Williams has made over 250 appearances for Athletic’s first team.

A favourite of FIFA Ultimate Team players, Williams is equally comfortable on the right or down the middle.

Standing at over 6’0 tall, he’s got the upper body strength to play with his back to goal, though his extreme pace means he’s at his most effective with space to run in behind.

Adama Traore was seldom considered one of the best young footballers during his time at Barcelona. Spells with Middlesbrough and Aston Villa followed for Traore, who has finally settled at Wolves and carved out a role in Nuno Espirito Santo’s squad.

Sometimes deployed as a right wing-back, sometimes up front, sometimes on the right of a front three, Adama is a must-watch talent. He fearlessly dribbles at opponents. Defenders are known to just bounce off him.

Unique as an athlete and a player, interest from other clubs has been inevitable – will a Champions League club pay big bucks for Traore?

Not many players have chosen to leave Manchester City in the Pep Guardiola era. Leroy Sane is the exception – the German international returned home to sign with Bayern Munich, adding to the European champions’ embarrassment of attacking riches.

Sane started his career at Schalke before earning his big move to Manchester. He flourished, and his wing partnership with Raheem Sterling became a fearsome prospect for any defence.

The pace is a big part of his game, but Sane also possesses immense strength to hold off defenders and would-be tacklers.

Liverpool were destined to have an entrant on this list. Sadio Mane or Mohamed Salah could stake a claim as the fastest player on their team – both have humiliated many a defence with their quick acceleration.

Mane uses his pace effectively in and out of possession. He frequently robs opponents, appearing at their feet quicker than they expected. He wins loose balls, and makes perfectly timed runs in behind the defence.

It’s not been his best start to the season, but Mane is still in the top five wingers in the world.

It hasn’t been the start Timo Werner will have hoped for when he agreed to sign for Chelsea.

The German international was an analytics darling during his final season with RB Leipzig – the strong underlying numbers have not resulted in an impressive return during his early months with the Blues.

Werner might not be the most clinical, but there are few defenders who can keep up with him. Premier League centre-backs have no chance when Chelsea are on the break.

Starring for the most successful football club in Germany, Alphonso Davies’ story is a fascinating one. Davies arrived as a raw left winger, but he has quickly ascended to become one of the best left-sided defenders around.

Playing on a Bayern team as stacked with talent as any squad in recent memory, Davies is a key component. His speed stretches defences and the quality of his delivery from left-back is as good as anyone’s.

A versatile full-back who can play on the left or right, Achraf Hakimi is one of the fastest footballers on the planet.

His pace, like Alphonso Davies, makes him an immense threat on the overlap and allows him to recover even against mobile wingers.

Hakimi signed with Inter in the offseason after an impressive loan stint with Borussia Dortmund. At 22 years of age, the Moroccan has several seasons of elite production to come. He’s already proven to be a masterful signing for Antonio Conte’s side.

Despite celebrating his 30th birthday last year, Douglas Costa is still electric. The Brazilian fell out of favour at Juventus and has returned to Bayern Munich on loan where he has joined an immense group of talent on the wings.

Costa’s career has been split between the two superclubs since leaving Shakhtar Donetsk back in 2015. He has collected five league titles across Munich and Turin, often dazzling with his quick footwork and blistering pace.

Never the star of his team, his impact has often been undervalued despite his eye-catching pace off the left wing.