Phil Foden Net Worth – How Much Is Phil Foden Worth?

How much is Phil Foden worth? A potential future Ballon d'Or winner, Phil Foden net worth is a major talking point amongst football fans 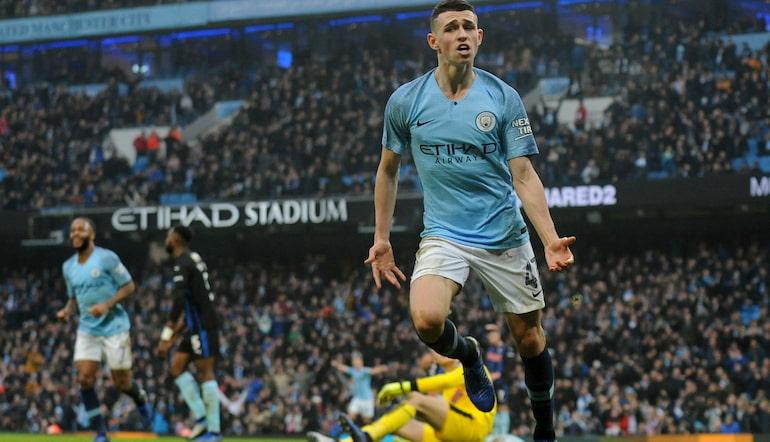 Long regarded as a talent of the future, Phil Foden has blossomed into an integral football betting figure over the last year or so.

The Manchester City and England midfielder has demonstrated his ability on the biggest stage, and shown he has what it takes to succeed David Silva at club level.

Playing for the Premier League betting favourites brings pressure. This is something Foden has taken in his stride.

How Much Is Phil Foden Worth?

Foden plays with a joy, making the game look easy, even when alongside the world’s best players. He has developed as a player sharing the pitch with Kevin De Bruyne, Silva and others.

He’s at home in the cauldron of Premier League showdowns and knockout Champions League ties.

Even so early in his career, lifting the Premier League trophy has become a habit for the Stockport-born midfielder. As Pep Guardiola’s Manchester City extend their period of dominance, Foden is the next in line, a natural evolution of the team.

Foden has yet to consolidate his place with England, but it’s surely a matter of time. There’s no question he’s got the talent to be an international star. Born in 2000, though, Foden’s career is only just beginning.

His time at the pinnacle of the men’s game might just be starting, but Foden has already accumulated considerable wealth. Foden is believed to have a net worth in the region of £3 million.

Unlike more established names, Foden is yet to develop a long list of sponsors. That’ll come in the following years, though.

Foden has long been associated with Nike. He has worn Nike boots throughout his professional career.

However, there has been speculation this partnership could come to an end as Foden has been wearing discontinued Nike boots recently.

Phil Foden is 5’7. His lack of height has occasionally been the foundation of scepticism, particularly for those wondering if he can cope with the physicality of central midfield.

On the other side of the debate, though, it has also led to comparisons with other shorter players. Height is hardly a barrier to success in football. In fact, Foden is the same height as Lionel Messi, David Silva, Andres Iniesta and Xavi.

Foden’s talent has allowed him to humiliate much physically stronger players. His diminutive stature has aided his agility, and seen him dance round plenty of lumbering opponents.

Perhaps being 5’7 will influence how managers use Foden long-term. Maybe he will be remembered in 10 or 15 years alongside the aforementioned quartet as one of the all-time great 5’7 footballers.

Phil Foden stats can be found in all the usual places. WhoScored is a reliable and easy to navigate website for football statistics, while those looking for the more in-depth numbers can delve into the reams of info at FB Reference.

Unlike other young stars like Erling Haaland and Kylian Mbappe, Foden’s statistics are not as eye-popping. He isn’t going to be putting up record-breaking goal tallies. His assist totals aren’t exactly Messi levels, either.

It’s with a deeper look that Foden starts to shine. For instance, he’s among the league leaders in key passes and dribbles completed per game.

On FB Reference, he’s ahead of James Rodriguez and Thiago Alcantara in shot-creating actions per 90 minutes. Foden will be a name to keep an eye out for on stats pages as his career develops.

Although clearly possessing the talent to be a future Ballon d’Or winner, Foden’s FIFA 21 ratings are a little underwhelming. Foden is not among the game’s best midfielders like Kevin De Bruyne, Paul Pogba and Luka Modric.

Although Foden is clearly a must-sign player on any career mode, he’s not exactly a desirable option on Ultimate Team.

The Manchester City is rated at just 79 on his base card. None of the attributes are particularly exciting either, with 81 dribbling being the standout.

If desperate to use the England international on Ultimate Team, some gamers may opt for the 82-rated Man of the Match card. This sees increases across the board, with 84 dribbling, 81 passing and 76 shooting.

While he’s not a popular player on FIFA 21, that could change in the near future. Many expect major rating increases for the Manchester City starlet when FIFA 22 is released in late 2021.

While this is still a healthy salary for any normal person, this is very low by Premier League standards, and particularly low for Manchester City.

It was announced in April 2021 that Manchester City have the highest payroll in the history of English football. Foden has two teammates on £300,000 or more per week.

There are 86 players earning at least £100,000 each week. When Foden lands his next contract, which can’t be far away, he will undoubtably join that group.

Given the salaries of his peers, he has to be among the most underpaid footballers in England’s top flight right now.

For comparison, it’s thought that Kylian Mbappe is on well over £300,000 per week. It has recently been reported that Erling Haaland would demand a weekly pay packet of £600,000 when he leaves Borussia Dortmund.

The negotiations for Foden’s pay rise are going to be very interesting – could his salary match that of City and England teammate Raheem Sterling?