From Jorginho to Bruno Fernandes, we look at the best Premier League penalty takers for EVERY team in 2021/22... 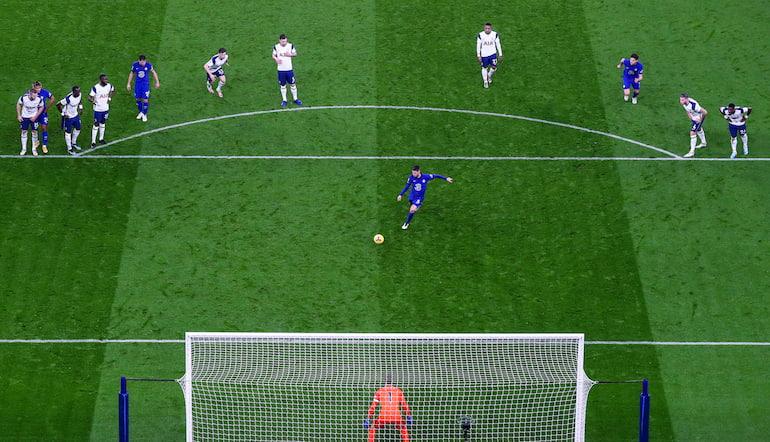 Penalties can cause an upset in EPL predictions. Moments of great controversy often lead to a spot kick from 12 yards out.

Such opportunities have saved bets and boosted stats. The best penalty takers in the Premier League have been near a guarantee.

With contrasting styles from stuttered run ups to powerfully driven top corner efforts, penalty taking is a meeting of science and art. It is an examination of technique as much as it is mentality.

Those with wagers in the Premier League odds can often be left thanking a penalty for saving their day. It can go the other way, of course, with a last gasp spot kick busting an accumulator or ruining your sure fire bet of the day.

The best EPL penalty takers in 2021/22 have been doing the job for years. Other clubs have less certainty over their spot kicks, with either multiple players sharing the duties or the manager having to change who takes the responsibility.

Manchester United, for instance, have rotated through a few penalty takers over the last couple of seasons. Bruno Fernandes has made the job his own in recent months, though that could change with the arrival of Cristiano Ronaldo.

For many clubs, it will depend on who is on the pitch at any given moment.

Players like Frank Lampard and Alan Shearer used to barely miss a minute, meaning they took pretty much every penalty throughout a season. With squad rotation, there are fewer clubs in that position now.

Jorginho is Chelsea’s first choice, as an example, but Mason Mount and Timo Werner both stepped up at times last season.

There’s a similar scenario at West Ham. With Mark Noble no longer in the first XI (he played just 707 Premier League minutes last season), David Moyes has been tasked with finding a new penalty taker. Declan Rice and Michail Antonio are two candidates to take the responsibility.

Burnley have a unique arrangement. Chris Wood and Ashley Barnes share penalty duties with each of them taking the penalties they win themselves.

Alan Shearer is the all-time leader in Premier League penalties scored. As the league’s top scorer ever and a cool penalty taker, it’s hardly surprising to see Shearer at the top of this list.

The Newcastle icon converted 56 spot kicks in the Premier League, leaving him with over 200 non-penalty goals.

Frank Lampard is second to Shearer with 43 penalties scored. Lampard had seven saved in the Premier League, while Shearer was more ruthless, failing to score on just six occasions.

Following two of the best Premier League midfielders of all-time, Sergio Aguero scored 27 of his 33 spot kicks. Mark Noble joined the Argentine on 27 penalties scored, though the West Ham icon only required 30 penalties to reach that mark.

Jamie Vardy and Harry Kane are the two highest ranked players still regularly taking penalties. On 26 and 24 respectively, the former England teammates should be near the top of this list by the time they hang up their boots.

It’s also a means to find some value options. Many FPL managers have invested in Jorginho or Luka Milivojevic at points in the last few campaigns as a result.

Alongside his set piece prowess, James Ward-Prowse being on penalty duty for Southampton enhances his worth as an FPL asset. He’s priced at just £6.5 million in 2021/22 and scored three of his four attempts from 12 yards in 2020/21.

Obviously, penalties being awarded is a difficult thing to project from an FPL perspective. It’s rarely a good idea to select a player just because they take penalties, as it’s impossible to know how many opportunities they will get.

It can, however, be a good tie breaker if you’re struggling to decide between two options.

With just one miss in 15 penalty attempts, many would label Mo Salah as the best penalty taker in the Premier League.

The Egyptian has plenty of company, however, with Jorginho and Luka Milivojevic also recognised as two of the most clinical from the spot.

Around 75% of penalties are scored. On that basis, it’s fair to say anyone who scores more than three-quarters of their attempts is a ‘good’ penalty taker.

Some are clearly far better than that, but a track record is important, particularly when it comes to the biggest moments.

While Shearer and Lampard might have missed a handful throughout their careers, they would still be on the shortlist if you could choose anyone to score a vital penalty.

With a combined 50 penalties scored in 58 attempts, it would be unfair to overlook Harry Kane and Jamie Vardy when discussing the Premier League’s best penalty takers.

They have proven their ability from the spot over a prolonged period, often delivering when the pressure was greatest.