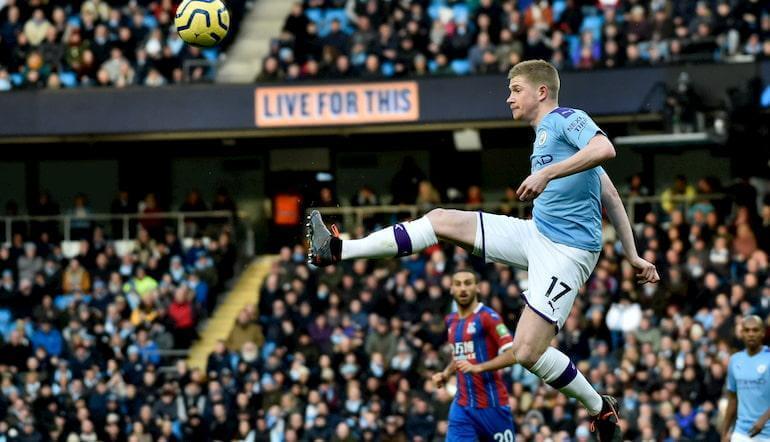 Some of the greatest midfielders of all-time have played in the Premier League over the years, with the likes of Paul Scholes, Steven Gerrard and Frank Lampard putting on a show in England’s top flight for well over a decade.

Nowadays, there is one man who is in a world of his own when it comes to dominating the midfield. The Premier League is his playground and he looks set to enjoy lots of success for years to come. But we’ll get onto him a little later on…

Midfielders have a tough job at the best of times. Trying to balance going forward with defensive duties is no easy feat – particularly if a team relies heavily on midfielders tracking back.

Without further ado, it is time for our list of the top 10 midfielders in the Premier League. Football betting experts will be familiar with these players but do you agree with our picks?

Ndidi has been a revelation for Leicester City this season, really coming into his own under Brendan Rodgers. The Foxes are in the hunt to qualify for the Champions League this season and Ndidi has been central to their success over the last nine months.

With three games to go, Ndidi has made the third most tackles in the Premier League. His performances have earned plaudits from some of Europe’s top clubs and it wouldn’t be a huge surprise to see Ndidi feature prominently in transfer betting tips this summer.

He is never going to be a box-to-box midfielder but Ndidi is excellent in his current role. At 23 years old, Ndidi has time on his side and a successful career looks likely.

Neves and Wolves go hand-in-hand. The Portuguese midfielder suits the Molineux club to a tee and plenty of punters will be keeping a close eye on Wolves in online betting odds ahead of the 2020/2021 Premier League campaign.

We know all about Neves’ sensational goal haul but he brings so much more to Wolves than just goals. Watch this space, the 23-year-old could work his way up this list of the Premier League’s top midfielders in the coming years.

To climb our rankings, Neves must start taking a match by the scruff of the neck on a regular basis. Wolves are building something special at Molineux and Neves will be key to their long term project.

I wasn’t convinced by Rodri when he first signed for Manchester City but he has made the holding midfield role his own in recent months. Fernandinho is now a shadow of his former self and Rodri has taken over as City’s chief defensive midfielder.

He is never going to be one of those players who steals the back page headlines but Rodri is certainly talented and his career is heading in the right direction. In another year or two, he could have climbed further up our best Premier League midfielder rankings.

Discipline remains a slight issue but Rodri is still adapting to the Premier League and that will come in time. Watch this space, Rodri ticks all the right boxes to continue improving and he is one to watch in 2021/22.

Yes, that’s right – Henderson ranks in our top 10 Premier League midfielders. Following in the footsteps of Steven Gerrard was never going to be easy but Henderson has exceeded expectations as Liverpool captain. In fact, Henderson has more than held his own in centre midfield.

Henderson will miss the rest of the season but Jurgen Klopp has confirmed that the Reds captain will lift the trophy on the final day. Liverpool will be well fancied in outright winner odds to make it back-to-back Premier League titles next season.

While rival fans continue to criticise Henderson, he has matured into a competent footballer in recent times and deserves a spot on this list.

Next up on our list is Grealish. Aston Villa are involved in a relegation battle and Dean Smith will be relying on the 24-year-old in the coming weeks. If anyone is capable of stepping up to the plate and leading Villa to safety, it is Grealish.

Grealish is Villa through and through but he has the chance to go right to the top of the Premier League. Loyalty is to be admired, particularly in the modern game, but he is almost too good for this Villa side – he is certainly the most gifted player on the team.

Linked with some of England’s biggest clubs, Grealish could be set to leave Villa Park this summer – whether the club stay in the Premier League or drop into the Championship.

Arguably the most underrated player in the Premier League, Wijnaldum has come into his own in recent months. The Liverpool star has missed just one league game this season and his influence has been key to their success in 2019/20.

888sport betting expert betting tips followers will be keeping an eye on Premier League odds for next season as we enter the summer months. Even if Liverpool decide to invest in the transfer window, Wijnaldum’s spot in the starting line-up should be safe.

If the Netherlands international can add more goals and assists to his game, he could climb further up our best Premier League midfielders rankings.

Kante has been one of the most consistent players in English football since joining Leicester City in 2015. Now plying his trade for Chelsea, the Frenchman is exceptional at carrying out his midfield ‘sweeper’ role in front of the back four.

The Blues midfielder has racked up solid numbers when it comes to interceptions, tackles and breaking up attacks. While he hasn’t been quite as dominant as in previous years, Kante is still clear as the Premier League’s elite defensive midfielder.

Chelsea have been hit and miss this season but Kante has been one of their most impressive players. While not quite Claude Makelele, he is of the same mould as his compatriot.

Potentially one of the best January signings in Premier League history, Fernandes has lit up the top flight in recent months. The former Sporting Lisbon midfielder has flourished since moving to Old Trafford and Manchester United’s resurgence is largely down to him.

At 25 years old, Fernandes is in the prime of his career. He has been directly involved in 14 goals in just 11 Premier League games since joining the club and he will be central to their chances of success for years to come.

The Red Devils will be well fancied in top four betting odds for next season – and the title could be a genuine aim if Fernandes manages to carry his form into 2021/22.

It looks like the break in play has done Pogba the world of good. The Manchester United star has struggled with injury problems in recent times but he is undoubtedly one of the most gifted players in the Premier League when fully fit.

The Pogba-Fernandes partnership is thriving and the Old Trafford faithful are dreaming of Premier League glory. With the Frenchman firing on all cylinders, the Red Devils could be challenging at the top of the table.

Pogba is a unique talent – a rare blend of skill, strength and speed gives him an edge over his peers. Here’s to hoping he can stay fit for the entire 2021/22 campaign.

The best midfielder in the Premier League by some distance, De Bruyne is an absolute joy to watch. The Belgium star is dominant in an exceptional Manchester City midfield and he is on track to top Thierry Henry’s record of 20 assists in a single season.

De Bruyne has been directly involved in 29 goals in 33 league games this campaign and City are a completely different proposition when the Belgian is off the pitch. On current form, he deserves his place in the Ballon d’Or conversation.

Man City are always a popular pick in football tips today and it would be foolish to write the Blues off with De Bruyne in sparkling form.