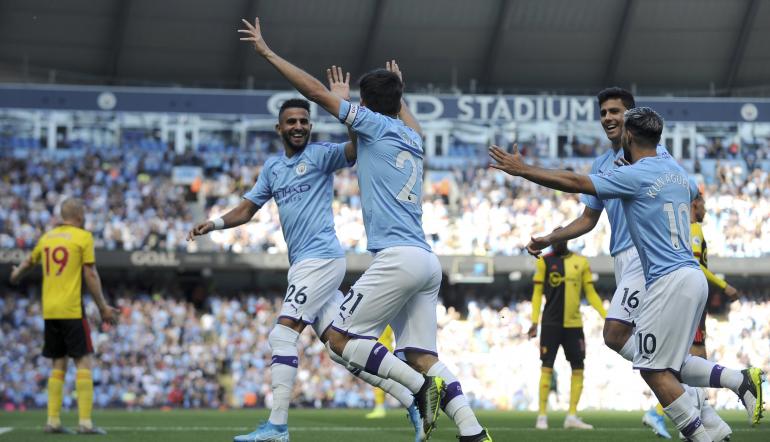 On August 27th 2022, Liverpool recorded a 9-0 victory over AFC Bournemouth at Anfield to equal the biggest wins in Premier League history.

Jurgen Klopp's side were in control from start to finish, with Luis Diaz opening the scoring with less than three minutes on the clock.

Incredibly, Mohamed Salah failed to get on the scoresheet but the Reds were unstoppable throughout and Roberto Firmino was particularly effective - scoring twice and assisting three for his teammates on a memorable day for the Merseyside club.

It might be some time before we see another 9-0 in the Premier League but we wouldn't be shocked if Liverpool were the first team to top the 10 goals mark in a fixture at some point...

Without a doubt, the Premier League is the most exciting division in world football. Every so often, we see a performance that sends shockwaves around the globe – and that is exactly what happened when Manchester City thumped Watford 8-0 on September 21st.

But was that triumph the biggest in Premier League history? We looked at the seven biggest margins of victory in England’s top flight since August 1992. Scroll down to find out whether City’s eight-goal thrashing is the greatest or not…

Newcastle were one of the strongest teams in English football in the late 1990s and it wasn’t a huge surprise to see the Magpies put Sheffield Wednesday to the sword.

Sir Bobby Robson had been at St James’ Park for less than a fortnight but his impact was felt instantly on Tyneside. Newcastle raced into a 4-0 lead in the first half, with club legend Alan Shearer notching an early hat-trick.

Would the Magpies take their foot off the gas? Of course they wouldn’t. Newcastle added to their lead just three minutes into the second half and went on to score their eighth and final goal in the 84th minute to clinch a decisive success.

If you watched a replay of this game today, you would never have guessed that Tottenham went on to win 9-1. At half-time, Spurs were just one goal to the good.

Cue one of the craziest halves in Premier League history. A total of nine goals were scored, with eight of those for Tottenham and a solitary consolation for Wigan just before the hour mark.

Jermain Defoe was key to Tottenham’s incredible second half, with the England star scoring five goals in the space of 36 minutes. The White Hart Lane faithful were sent home happy after one of the club’s most remarkable victories.

The first of two Chelsea wins on this list – the Blues thrashed Wigan on the final day of the 2009/10 season to secure the Premier League title in the most emphatic way possible.

Needing three points to claim their third top flight crown since 2004, Chelsea took a 2-0 lead into half-time. The Blues were in complete control at Stamford Bridge but it was about to get even better for Carlo Ancelotti’s men.

Four goals in the space of 14 minutes in the second half helped get the party mood going. At the time, that eight-goal haul helped Chelsea to break the record for most goals (103) in a single Premier League season.

Chelsea gave their fans an early Christmas present against Aston Villa in December 2012. For the second time in four years, the Blues scored eight goals in a Premier League home game.

Fernando Torres set the ball rolling with less than three minutes on the clock and that goal set the tone for the afternoon. By the time referee Phil Dowd blew the half-time whistle, Chelsea were three goals to the good and cruising.

Seven different players scored for Chelsea – an incredible feat. The frustrating thing from a Blues perspective is, Chelsea could’ve potentially topped the 10-goal mark with some better finishing in the final third.

Southampton had one of the Premier League’s most attacking teams in 2014/15 and Saints showed their offensive mettle in this clash, scoring eight goals against a shocked Sunderland in October 2014.

An own goal put Southampton in front and that was a sign of things to come for Sunderland as Saints ran in seven more goals without reply. It was the club’s biggest victory since an 8-0 drubbing of Northampton Town in 1921.

Sunderland conceded 53 goals in 38 Premier League games that season – with 15% of those coming at St Mary’s. Southampton will be hoping to hit the magic eight mark again in the near future…

It was only a matter of time until Manchester City joined this list. Pep Guardiola’s men raced into an early lead, with five goals in the first 18 minutes at the Etihad Stadium.

With the Blues dominating from the first minute, neutrals were hoping that City could hit double figures but it wasn’t to be. Still, expect the Premier League champions to win by a similar margin at some point again this season.

At the time of writing, Watford are rooted to the bottom of the Premier League table. The Hornets will be looking to avoid another good hiding at the hands of City when the teams go up against each other in May.

Manchester United are still cream of the crop when it comes to the highest Premier League win, with Sir Alex Ferguson’s side putting nine past sorry Ipswich Town in March 1995.

The Red Devils built up a commanding advantage in the first half but it was their exploits in the second 45 that attracted attention. With Ipswich on the ropes, United showed no mercy as they raced into an 8-0 lead with 72 minutes on the clock.

Andy Cole completed the rout with his fifth goal in the 87th minute and that victory will live long in the memory with United fans. It might be some time before we see the Red Devils dominating like that again.