Manchester United vs Liverpool: Who Is England's Biggest Football Club?

Who gets your vote for England's biggest football club, Manchester United or Liverpool? 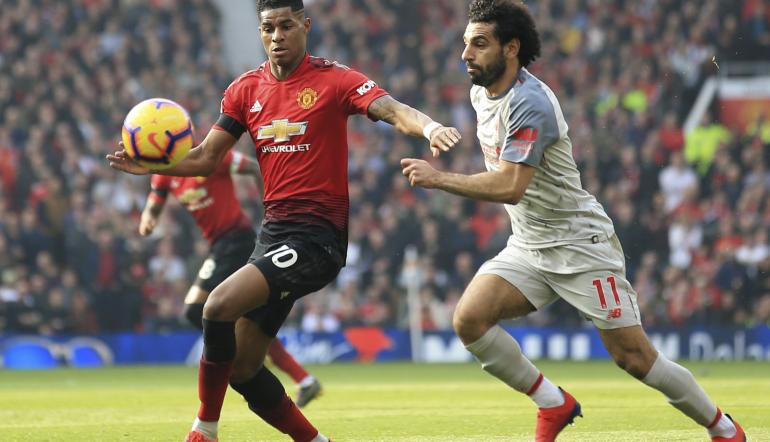 The rivalry between Manchester United and Liverpool has changed over the decades.

The years of Manchester United dominance under Alex Ferguson have, like Liverpool’s successes in the 1970s and 1980s, been allocated to the history books. The most recent chapter is always given extra significance.

One question has rumbled along through the many years of Manchester United and Liverpool’s dislike for one another: Who is the bigger club?

For most of modern footballing memory, the answer to that question has been particularly loaded. Whichever of the two is ‘biggest’ (however you choose to define that), has also been the biggest club in England.

It gives a passport to be bundled in with Bayern Munich, Real Madrid and Barcelona as the biggest clubs on the planet. Perhaps the easiest, arguably crudest, way to compare ‘size of club’ is to do it through the prism of the business world.

Football clubs are international businesses, turning over vast amounts of money. For all the downsides of that, it’s the cold truth of modern elite football: these teams are businesses first and foremost.

Manchester United, despite their post-Ferguson slump, have excelled as a business. Partnerships are coming out of their ears, and their ‘brand’ remains one of the most famous in all of sport, up there with the Dallas Cowboys, New York Yankees and Real Madrid.

Liverpool, on that same list, were languishing in eighth. Their estimated value just over half of United’s, Liverpool were placed behind Manchester City, Chelsea and Arsenal.

From a business point of view, Manchester United still hold a massive advantage over their northwest foes.

For all that financial clout, United have fallen way behind Liverpool on the field. There are long, long books to be written about Manchester United’s transfer strategy. It has been messy. Liverpool’s, in stark contrast, has been superb over the last few years.

Liverpool are hardly scrambling for pennies – they made Virgil van Dijk and Alisson the most expensive defender and goalkeeper ever not so long ago – but their financial muscle isn’t in the same league as United.

The hits in the transfer market for Liverpool have far outweighed the misses. Under Jurgen Klopp they have a clear plan, a blueprint, that Manchester United have lacked over the last decade.

On the field, at this very moment, Liverpool are lightyears ahead of United. European champions, genuine Premier League contenders and one of the top three or four teams in the world, Klopp’s side are special.

United are in the Europa League with a less than convincing manager. 888sport has the latest football odds and betting options – Manchester United are 6/4 to finish in the Champions League places this term.

So when it comes to the ‘size’ of a club, how much weight is placed on the now? Is Liverpool’s current superiority enough to overcome the financial inferiority? Does the counting of previous trophies matter that much?

That last question is one that ignites debate. How much previous success contributes to a club’s reputation or ‘size’ at the moment is wildly subjective.

Nottingham Forest’s two European Cups clearly have an impact on the perception of the club in 2019, but does it make them a bigger club than Chelsea, Manchester City, Arsenal or Tottenham (none of whom have won two European Cups)? Of course not.

Liverpool having won double as many European Cups/Champions Leagues as Manchester United is fun for the red half of Merseyside, but it isn’t particularly relevant.

If Liverpool had six and United were yet to taste European glory, it might be different. They are two clubs with European pedigree, and both have lifted that famous trophy aloft in recent memory.

Alex Ferguson made a point of surpassing Liverpool’s 18 English league titles. United are two clear of their bitter rivals on that leaderboard.

Liverpool’s quest to end their league drought has the added incentive of pursuing United’s 20, but again, the two clubs are close enough for it to mean relatively little.

That era of United success through the 1990s and 2000s built the business empire that Manchester United are in 2019.

Consistent trophy-lifting is crucial for any team looking to grow off the field, and that’s why comparing the business side of the clubs doesn’t feel like a completely fair game either.

Answering who is the ‘bigger’ club is a personal thing. Each fan will have their own conclusion, and a unique set of reasons for that decision. The one thing we can do, however, is look at where the teams are right now.

Liverpool are fancied to win the title, Ole Gunnar Solskjaer is under pressure, Manchester United are facing a real battle for a top four spot.

If you were a player, offered the same role and contract by both clubs, which would you choose? The answer to that question probably tells you who the ‘bigger’ club is right now.