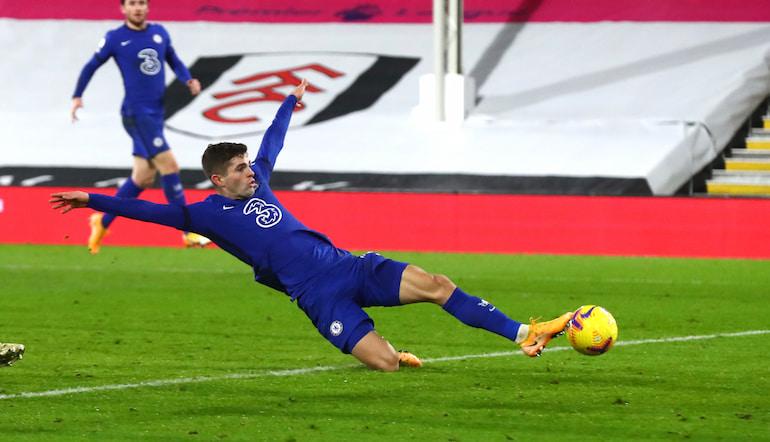 Christian Pulisic has been blessed with immense talent – he is up there with the most skilful players in the Premier League, and quite possibly world football.

However, he is also very injury prone. The amount of Pulisic injury news updates coming out over the years is concerning for Chelsea and United States fans alike.

Football betting fans know all about Pulisic injury history issues and his fitness can be key to decision-making when looking at the latest sports odds.

When fully fit, Pulisic is a world class talent and Chelsea fans will be hoping for no negative Pulisic injury news as we enter the business end of the season.

If you look at Pulisic injury history, his chances of avoiding a setback are slim but the United States winger will be doing his best to avoid any serious injury.

Without further ado, it is time for soccer prediction fans to get stuck into our Christian Pulisic injury profile, starting with a look back at the Chelsea star’s injury record.

According to Transfermarkt, Pulisic has suffered nine different injuries since joining Chelsea in January 2019.

Pulisic has sustained a number of setbacks throughout his career but none worse than the torn abductor muscle that occurred in a training session in January 2020.

That issue kept him on the sidelines until June, making it the worst Pulisic injury on record. The American was forced to miss 12 crucial games in the second half of the season.

If you look back at his time at Borussia Dortmund, the Pulisic injury record doesn’t get any better – with 13 injuries impacting his influence at Signal Iduna Park.

While he was never ruled out for longer than 20 days, the number of injuries sustained by Pulisic during his time in Germany speaks volumes.

The muscle injury that kept Pulisic out in November was just one of many setbacks for the Chelsea star but the latest Pulisic injury update is positive.

He is currently healthy and has been a pivotal figure for Chelsea in recent weeks, helping the club to climb the Premier League table and challenge in the Champions League.

There are always going to be concerns over Pulisic injury health updates but fans can take confidence from his general wellbeing over the past few months.

Pulisic will always be injury prone but the Chelsea medical staff have done a fantastic job at helping the American back to full fitness and the Blues are reaping the rewards.

At the time of writing, Christian Pulisic is healthy and fit. He returned from a minor setback to play in Chelsea’s 1-0 victory away at Atletico Madrid having missed just one game.

The German said: “We have some issues with the calf of Pulisic, it’s nothing big, it just feels tight and a bit of a risk.”

Tuchel’s comments proved to be accurate as the American returned to the Chelsea starting line-up. Fans will be hoping that this is the last Pulisic injury problem this season…

Go to any football prediction site and search for Pulisic injury news and you are likely to see articles relating to the American’s poor injury record.

Pulisic injury news can be found at any respectable sports website – whether it relates to a minor knock or a long term Pulisic injury problem.

Some players are more injury prone than others and Christian Pulisic just so happens to be one of those footballers who pick up niggling issues here and there.

Fingers crossed we don’t hear about any more Pulisic injury news in the coming weeks. The Chelsea star is beginning to shine under Thomas Tuchel and he will be key to their chances of success.

While Pulisic is not currently injured, there are a number of ways to keep up with Pulisic injury return date information if/when the American is set to spend some time on the sidelines.

Firstly, follow Chelsea press conference news for the latest Pulisic injury updates. Tuchel is one of the best football managers at keeping fans informed on any important news and that is no different when it comes to Pulisic injury reports.

With so much history relating to Pulisic injury news, it is important to find the latest sports news and accurate football information.

‘When will Pulisic return from injury’ is the question that everybody wants to know – and that information will be readily available on football prediction websites ahead of upcoming fixtures.