RCD Espanyol: Everything You Need To Know About Espanyol

Who are RCD Espanyol? From the RCDE Stadium to Espanyol FC history, we cover the entire Espanyol club profile here... 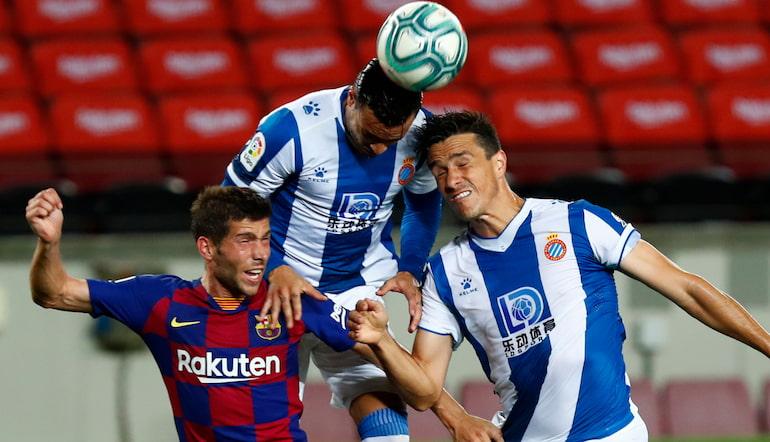 After one season in the Spanish Segunda, RCD Espanyol are back in La Liga. Having finished bottom of Spain’s top flight in 2019/20, Espanyol bounced back to claim the Segunda title the following campaign.

Prior to Espanyol’s relegation, the ‘periquitos’ has been present in La Liga since 1994 and it will be great for Spanish football to see them back in the top flight.

While arch rivals Barcelona may not be so happy, La Liga football betting fans will be happy to see Espanyol on the big stage once again.

Here, we put Espanyol FC under the spotlight ahead of their La Liga return. Where do RCD Espanyol play? Who is Espanyol’s top goal scorer? What is Espanyol’s stadium called?

We answer the biggest questions relating to RCD Espanyol here at 888sport and our soccer prediction experts will be back with La Liga tips from August onwards.

Both teams finished on 82 points and 28 goals conceded but Espanyol’s firepower in attack made the difference with Vicente Moreno’s side notching an impressive 71 goals.

Espanyol broke the club transfer record to sign Raul de Tomas from Benfica in August 2020 and the team saw an instant return on that investment, with De Tomas bagging 23 goals to clinch the Segunda Division top scorer award.

His relationship with Adri Embarba was clear for all to see, with the 29-year-old finishing as the league’s top assists maker with 14 in 2020/21.

On all known facts and figures relating to the 2020/21 Segunda Division season, RCD Espanyol were excellent value for their title success and fans will be quietly confident of avoiding relegation in La Liga next term.

Espanyol played home matches at the Estadi de Sarria for over 75 years before switching to the Estadi Olimpic Lluis Companys in 1997.

However, things didn’t really work out as planned and Espanyol moved into the new RCDE Stadium ahead of the 2009/10 season.

The RCDE Stadium is visually impressive, with its 40,500 capacity making it the 10th largest stadium in Spain.

It is a stadium worthy of Spain’s top flight and La Liga betting punters will be familiar with the venue come the end of the 2021/22 Spanish football season.

Although Espanyol cannot compete with city rivals Barcelona in terms of trophies, the club have still enjoyed reasonable levels of success over the years.

Espanyol FC are four-time Copa del Rey winners, with the most recent success coming back in 2005/06 – RCD Espanyol put four goals past Real Zaragoza in the final.

Historically, Espanyol were crowned Campionat de Catalunya champions on 11 occasions and this competition was the first football league in Spain before La Liga was established in 1929.

See below for the complete RCD Espanyol honours list:

Without a shadow of a doubt, Espanyol’s biggest rivals are FC Barcelona. The rivalry dates back to the origins of organised football in the region – three decades before La Liga was even formed.

While Barcelona were founded less than one year prior to Espanyol, there was an instant rivalry due to proximity and political issues.

There have been plenty of derby matches played over the years in La Liga, the Copa del Rey, Spanish Super Cup and other competitions, though Barcelona have often come out on top.

However, RCD Espanyol are always determined to spring an upset whenever the two clubs clash and fans will be keeping a close eye on La Liga fixtures for this encounter.

As well as branching out into basketball, baseball, hockey and volleyball, the Espanyol FC department created a reserve team to play in the lower tiers of Spanish football.

In 1981, Espanyol B were officially formed and joined the Spanish league system, with the team currently playing in the Segunda Division B.

With over 100 years of history, Espanyol fans have seen some fantastic footballers ply their trade for the club but Raul Tamudo sticks out above all others.

Tamudo helped Espanyol to two Copa del Rey triumphs during his time at the club and he is the Espanyol FC all-time top goal scorer with 140 goals.

In addition, he also holds the record for most RCD Espanyol appearances with 389 games played for the club – Tamudo is arguably the biggest legend in Espanyol history.

Without further ado, we’ve shared some of the best Espanyol records as of June 2021. Fans will be hoping that the Periquitos can challenge some of these next season…

The RCD Espanyol brand has thrived on social media in recent years, so much so that the club opted to create Twitter channels for individual sections of Espanyol FC.

According to Twitter, the @RCDEspanyol account is the official page for the men’s football team – with almost 500,000 followers as of June 2021.

However, there are a few other verified Espanyol FC accounts on Twitter, with each page targeting a specific section of the RCD Espanyol fanbase.