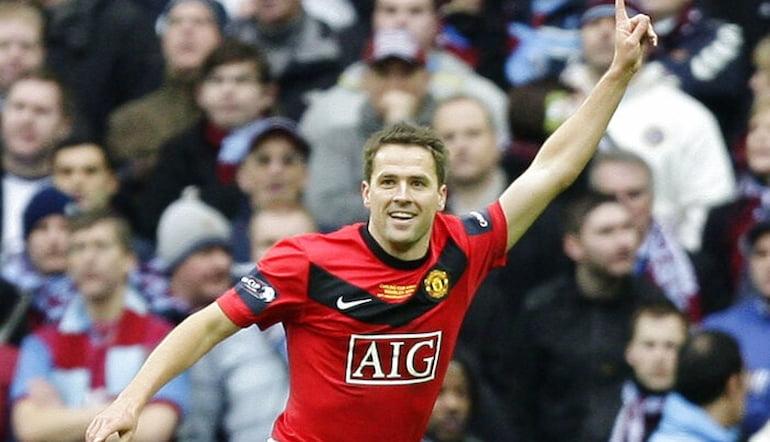 Michael Owen will always have a complicated relationship with Liverpool and Manchester United fans, having played for both fierce rivals.

After scoring 118 times for the Reds, a tally that included a FA Cup final winner, Liverpool supporters felt betrayed when their prodigious forward joined United late in his career

As for United’s faithful, they found it difficult to take a player so closely affiliated with a hated rival, to their hearts.

Concerning the latter however, that all changed – if only for a short while – on the afternoon of September 20th 2009 when, in the sixth minute of added-on time in a highly meaningful Manchester derby, Owen scored one of the most memorable and remarkable winners in Premier League history. There can surely be no better way to ingratiate yourself.

95 - Man Utd striker Michael Owen wins the Manchester derby in September 2009 with a goal timed at 95 minutes and 27 seconds, scoring the fourth goal in a 4-3 victory over rivals Manchester City in the highest-scoring top-flight Manchester derby since 1971. Drama. #OptaPLSeasons pic.twitter.com/5iHKJRb55F

Before we get to the goal though, the circumstances.

It is common these days to see Manchester City priced at short odds in the Premier League betting as they secure title after title but in 2009 they were still on the rise, ambitious and extremely active in the transfer market, but still nowhere near the finished article, just 18 months after being taken over and furnished with a fortune.

Even so, it felt inevitable they would smash their way into the elite, just as it felt possible that Manchester United were on the wane, following decades of dominance.

This derby therefore had a weighty significance attached. For so long United had been the top dogs in Manchester and sure-fire favourites in the pre-match betting when these sides met. How much longer would this be the case?

Determined to hold back the tide a while longer, Sir Alex Ferguson’s men flew into proceedings, taking the lead after just two minutes courtesy of a close-range Wayne Rooney finish.

But less than 15 minutes later it was all-square, with Gareth Barry taking advantage of some calamitous defending.

That Carlos Tevez was involved, a former Red who contentiously migrated across the city just three months earlier, made it all the more galling for the vast majority inside a packed Old Trafford.

At 1-1 it stayed until half-time whereupon an engrossing encounter lost all sense of reason.

In the second period Darren Fletcher twice scored with his head only to be pegged back on both occasions by Craig Bellamy, his second again deriving from a defensive mishap and slotted home in the final minute.

It seemed it would be the Blues making a statement on this red-letter day. That they were now the equals of a club that had long kept them in the shadows.

A board was held up, showing that four additional minutes were to be played and naturally, this prompted talk of ‘Fergie-time’. That was until the four minutes were up.

Only the referee kept on playing. And playing.

Rooney's overhead, Owen's late one, Silva to Dzeko, 'Why Always Me?' - seems there are a few Manchester derby goals which you all remember!

With 95 minutes and a few seconds on the clock, Ryan Giggs found space and spied Owen free on his left. Brought on late in the game, the 30-year-old was fresh and alert, surrounded by exhausted players.

Found expertly by the veteran winger and with just Shay Given to beat, the goal-grabber did what he did best. He remained composed and clinical, dinking the ball into an empty net.

The Theatre of Dreams exploded in ecstasy but there was something more to the celebrations. There was a notable edge of defiance.

And for the briefest time, maybe a day, or a week, or stretching to a month, a Liverpool legend was truly loved by the red half of Manchester.